It’s about the adventures of Adam (yep, the guy from the Bible) and his faithful chum Ricky saving the world from Hitler and the Third Reich, who have happened to come across a time machine and plan on wreaking havoc up and down the timeline of human history.

Long story short, our main character is the primordial man (at least according to the bible) and his faithful pig pet (don’t ask) and their adventures chasing Hitler and his minions. Gameplay-wise , the human, Adam, will be a ranged class and Ricky the filthy pig is going to be a melee oriented bruiser.

Long story short, our main character is the primordial man (at least according to the bible) and his faithful pig pet (don’t ask) and their adventures chasing Hitler and his minions. Gameplay-wise , the human, Adam, will be a ranged class and Ricky the filthy pig is going to be a melee oriented bruiser.

Since Adam has the positional advantage of being a ranged toon, Ricky will obviously be more tanky to withstand all the front line beating. He’ll also be somewhat more pissed off, which will obviously makes him more dangerous.

And these are our main protagonists. The one on the right is the pig, just to make it clear.

Since there are two characters that combine their skillset to progress throughout the game, the whole experience wil be local coop, with one player controlling a character each. If you haven’t got any friends, you can always play solo though!

Solo mode will be a bit like Donkey Kong. You will be able to switch characters at will, and the AI will take over the one you aren’t controlling to help out a bit. Don’t rely on it very much though, as it will be easily distracted and sometimes more of a nuisance tan a helping hand.

The campaign is essentialy a journey through time, and different eras have different fashion sensibilities. That will be represented by a number of outfits you can acquire for each character.

When you equip one of these outfits, a certain weapon associated with it will become avaliable, mainly one that represents the era.
What makes these outfits interesting is that they alter your toon visually (just wait for that pig with a spartan outfit), and they also give you different stat balances, like sacrificing toughness in favour of mobility or viceversa.

To add a bit of drama to the mix, every outfit will have a special attack that will consume all of your mana. The effects will prove to be rather apocalyptic, so just wait and see!

Satyrs are melee enemies that don’t hit very hard. They aren’t very clever and they will attack mainly in groups so they can try to prove a bit of a challenge at least.
Their AI boils down to:

Is there a player in view?
Yes: go kill him
No: skulk mindlessly around the area 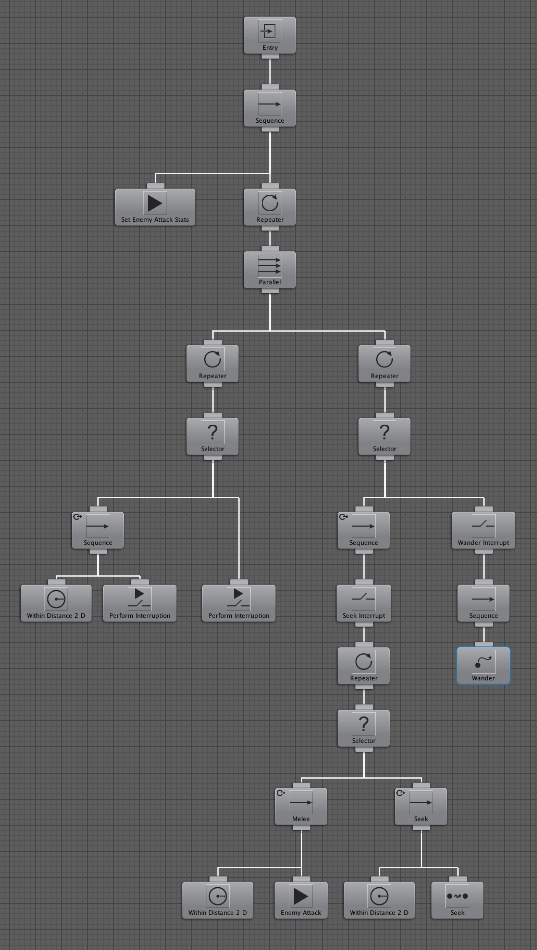 Essentiallly they act like drunk hooligans looking for a fight, so we’ll give them just that.

In rare circumstances, one of these mindless satyrs can become intoxicated to such a degree he will start reading books, and that’s how satyr shamans are born. These enemies have mastered the magical art of throwing floating green balls that look rather weak, but hit harder tan expected.

Another perk that these shamans posess, apart from their ridiculous beards, is that they can resurrect fellow satyr hooligans. All that drinking and reading has clearly affected their physical forms, and they move slower than ordinary satyrs. That’s what you get when you spend all day reading. They are rather slow and they behave in an odd manner.

Is there anything to resurrect?
Yep: go rez
Nope
Player near?
Yep
Too near?
Indeed: Flee!
Nope: Throw green balls of fun
Nope
skulk midlessly around area 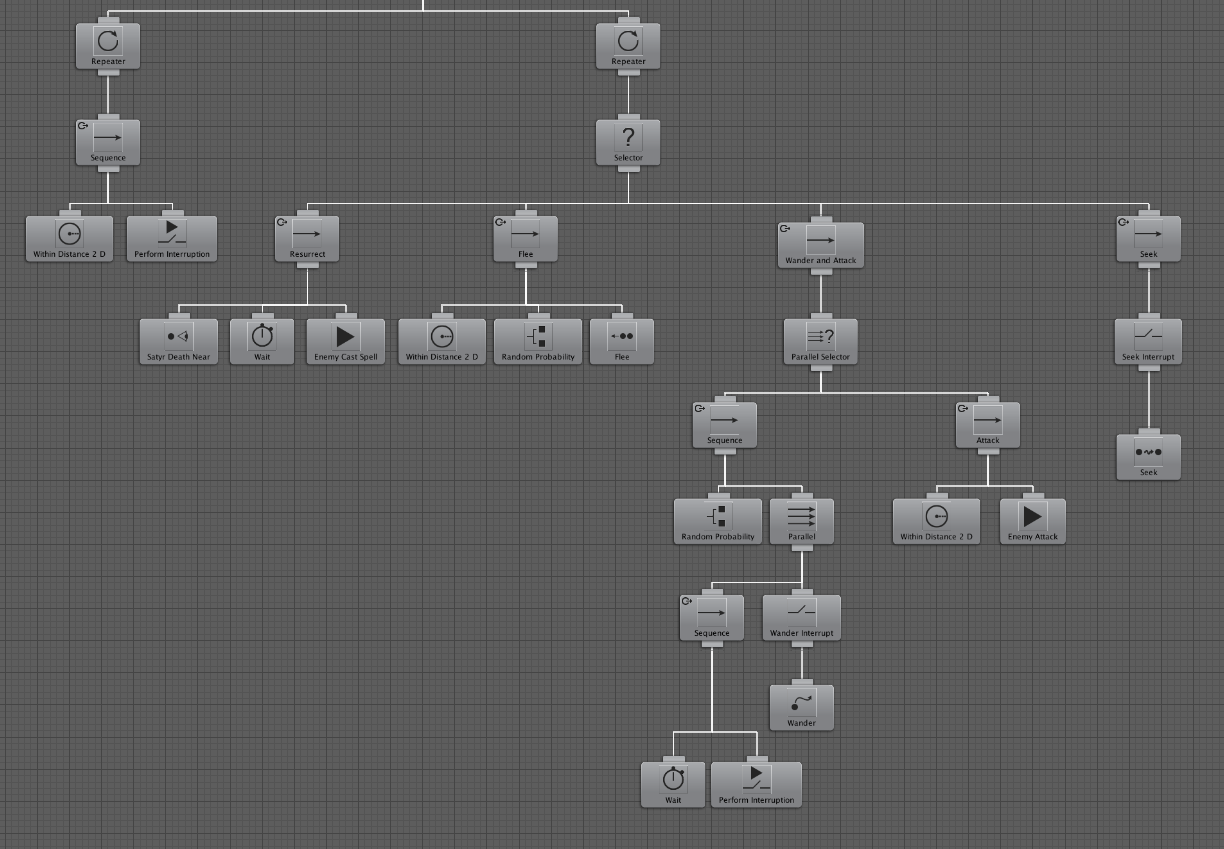 During testing, we realized that with 3 or 4 rezzers it was a bit hard to deal with large groups of satyrs. Endless chain resurrections were a bit too much, so we decided that the best way to curb these practices was allowing the player to destroy corpses by bashing them repeatedly.
To add a bit of theatre, we made a nice particle system that provides super splatter effects so that everything ends up beautifully red!

Here at morefoes we are big fans of Isaac Newton, so in a little homage, we added basic physics to the game. The whirlwind special attack, for instance, not only makes enemies move and fly around the place, it also interacts with their corpses and gibs.

NPCs sometimes might have interesting information for us, so we have developed a couple of dialog systems.

The first and simplest of them is Bubble Speech, which will generally inform us of the emotional state of an NPC. Things like his mood, whether he is dying from brutal attacks, or if he misses his family, etc.

The other system is somewhat more cinematic, with main characters interacting with each other to move the story forward. At some point we toyed with the idea of introducing multiple dialog options, but we figured that it would be redundant since the outcome always ends in mindless violence. With nazis there can’t be a dialog, only death. 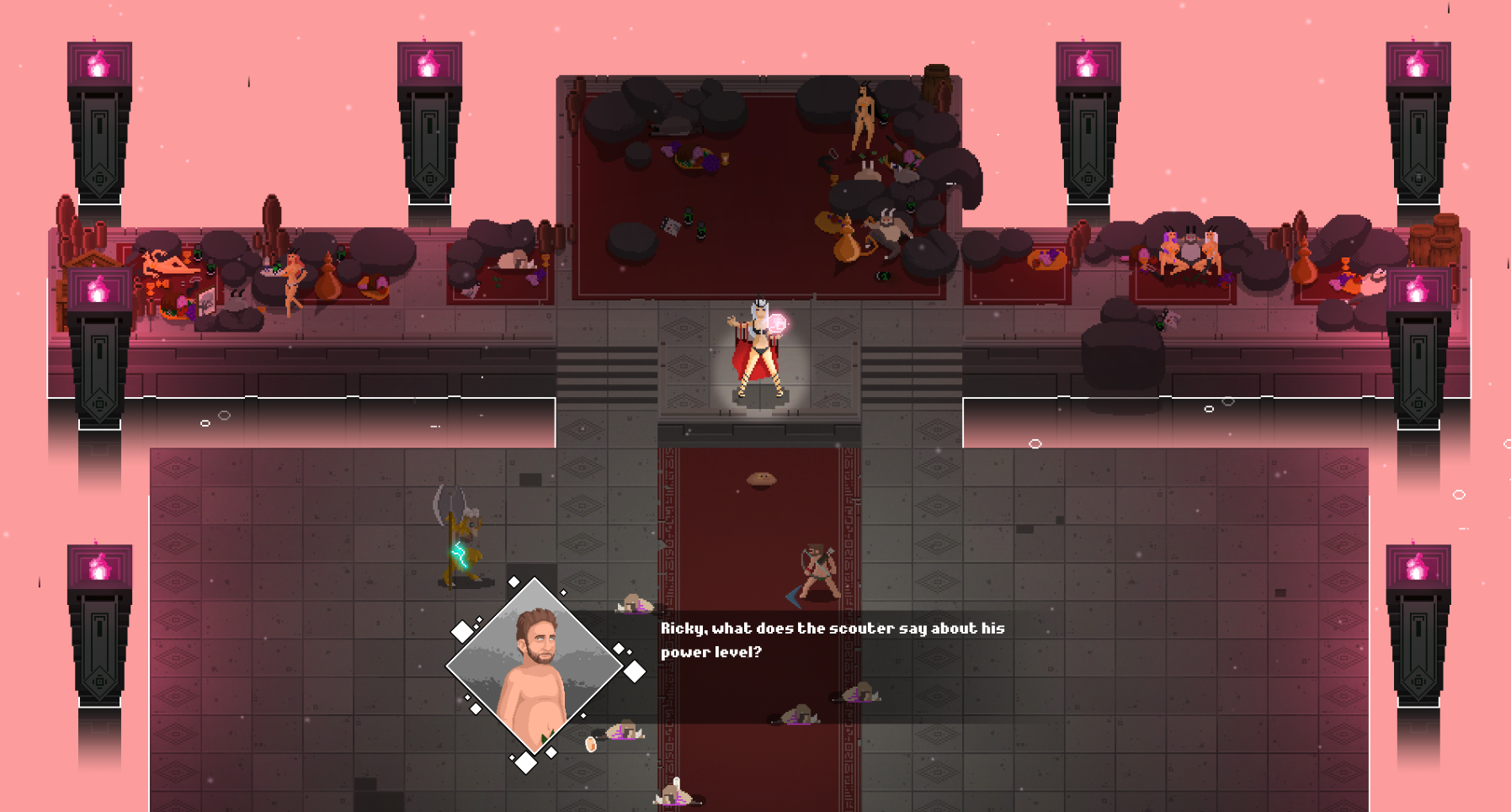 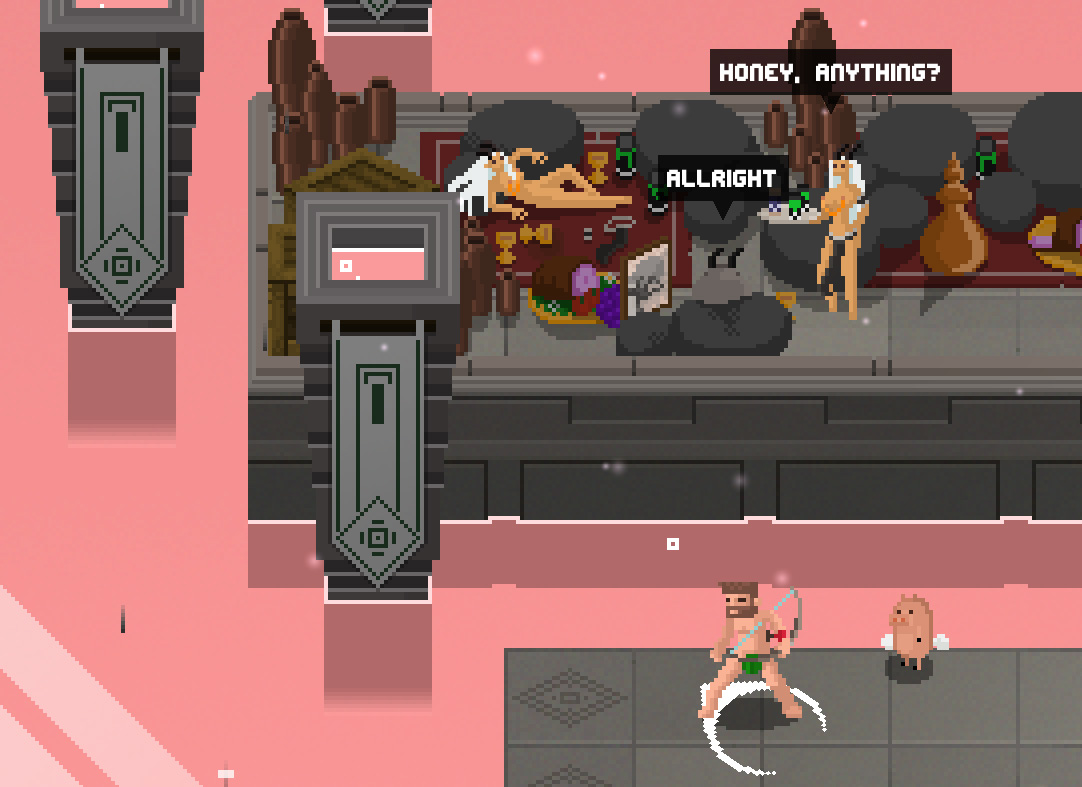 Nice to see you on indiedb guys!

You know you have our support:>