Looking for a narrative gameplay !

Like everyone, we love the GTA games franchise ! But the problem we encounter with all these mafia games (GTA, Mafia, the early Hitmans...) is that their gameplay focuses exclusively on action when there is so much more to feel in mafia stories.

In great Mafia movies like The Godfather, Scarface, Once Upon a Time in America or Goodfellas, the characters don't spend their time shooting around or driving fast cars. They do it when they need to, but what makes the flesh of the story is their relationships with each others. This relation evolves during the movie depending on characters' life and choices ending oftenly in a necessary violence. It's the way the viewer identifies himself with these tense situations and feels connections with the characters, that makes these stories so fascinating not only the five minutes of spectacular action that conclude them. Why should video game players be denied the pleasure of taking part into these strong human questioning ?
How can we create a gameplay based on story and psychology ? That is the question we've been asking ourselves at Narra Flux for more than ten years (this game is the second version of a Flash game published on Kongregate in 2008). 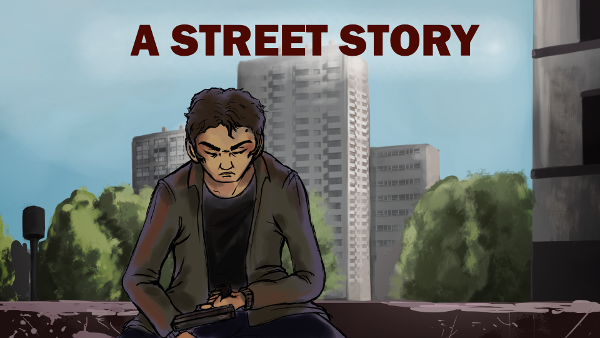 Developping the art of interactive dialog

Actually we've decided to strictly invert the proportions found usually in video games. Usually, 10% of the game time (and often much less) is spent watching non interactive cinematic dialogs structuring the story, while the 90% percent remaining are dedicated to the interactive action sequences. What we do is 10% or less non interactive visual graphic scenes (killings, SEX and such...) and 90% interactive dialog sequences.

Well, just look how audiovisual art has evolved ! In the 1920's, before talking cinema was invented, silent movies were mainly action with a few dialog cards in between to make the story coherent (look at the 1920 Douglas Fairbank's Zorro movie if you don't believe me). Modern audiovisual storytelling (I'm not speaking of Holywood blockbusters trying to go back to a primitive cinematic experience inspired by... video games !) such as the Game of Thrones or Hannibal series, are mainly constitued of dialogs, fleshed out by cinematographical work. Are these series more boring and less popular than 1920's silent movies ?

We've conceived the story around the interactive possibilities offered to the player. At the same time, we offer the player the larger choice of possibilities while staying coherent to our characters and our background.
In our first scene, for instance, the player takes part to the murder of a supposed traitor. The choice is given to the player to kill or to let the character be killed by his best friend. Why not allow the player to save this fellow ? Well, it's the beginning of the story : the hero still doesn't have much power in his gang. We want to show in this first fierce scene that the hero is dependent on the people he works with : his choices are limited, like they would be in real life.
Be reassured : every other murder in the story can be avoided. This is not a trick to force the story in a particular direction and we're doing our best not to display too many forced situations. Nevertheless, we still think that liberty in video games is more meaningful if enclosed in the limits of real interactions. If you just allow your player to kill anyone or destroy anything, you're making your story totally unbelievable : in real life, such an attitude would send a person immediately in jail. 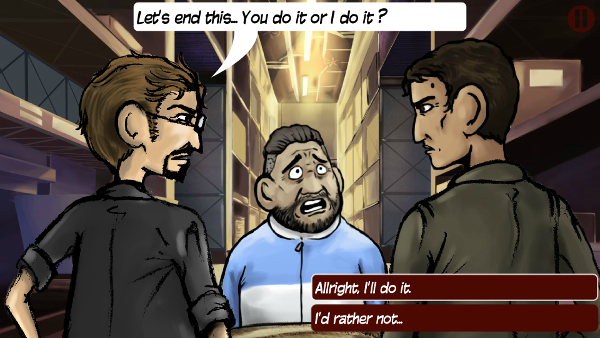 If we have decided to center our gameplay around dialogs, it doesn't mean that we despise every other form of gameplay or the importance of graphical language. We're just trying to make a game work only by getting the players invested in the story and the characters. That's why we did not include in our game typical trials or puzzles you find usually in video games : we didn't want to grind our narrative gameplay with these mechanics.
Nevertheless, the graphical aspect of the game demands a lot of work : we're creating a large set of visuals expressions for each of our seven characters. We have planned around 20 different expressions for each (more or less depending on the character) summing up to a total of 140 drawings. The graphics must convey our characters' feelings and give the illusion of life.

Our objective with this game is not to deny how great action games can be. We love the games based on action or puzzles but, we're experimenting on the unexplored possibilities of interactive narration. This dimension could allow video games to enter a new era of interactive storytelling and enrich their language and possibilities.

The playable character will be Mohamed, the one in the middle, that everyone appreciates and who is in a good position to manipulate the others. 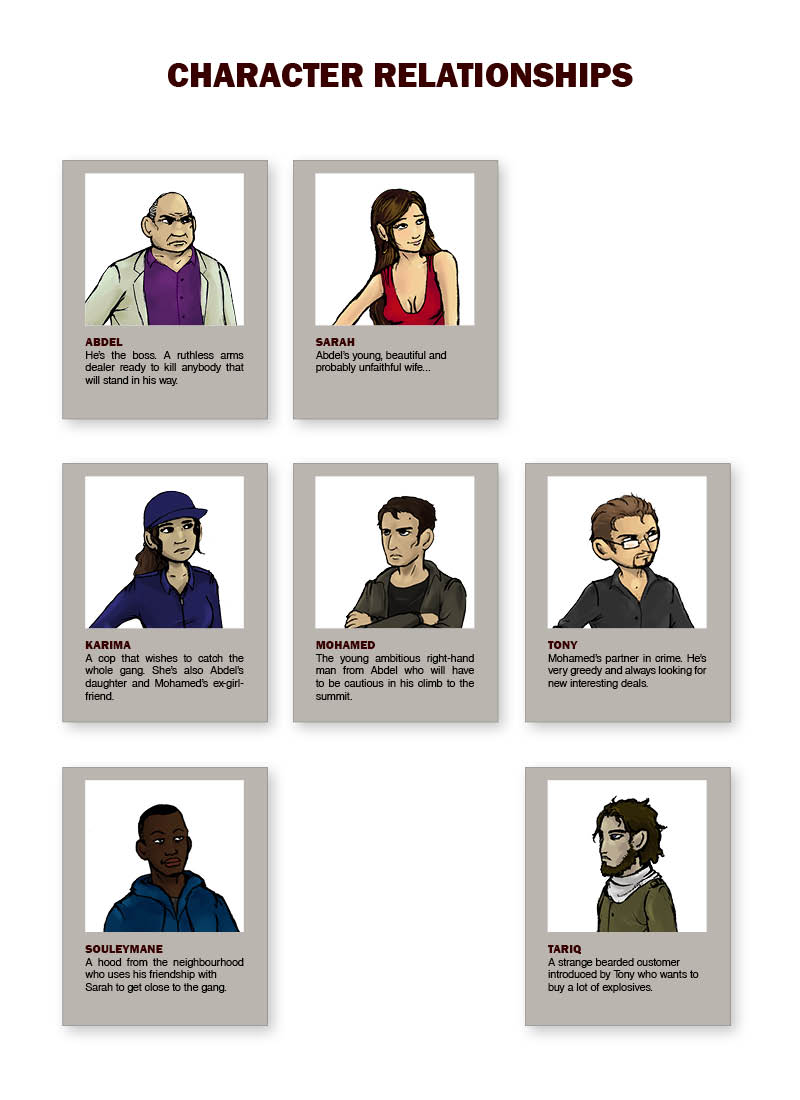 Our objective is to create tense dramatical situations between those characters making the moral choices more difficult for the player.

Tags
Embed Buttons
Link to A Street Story : heat in oriental Paris by selecting a button and using the embed code provided more...