Set during the Second Punic War and beyond, A Legionary's Life lets you play as a Roman conscript soldier. Rise up through the ranks and win prestigious awards or just focus on making it home in one piece; it's up to you.

This is a single-player game with RPG elements, extensive usage of attribute and skill checks, a turn-based combat system involving many variables (including morale, reach, confined space and high ground) and a touch of roguelike features. Among them, permadeath. If you are unfamiliar with the term, it means you'll have to start over if your character dies; but don't worry, the game is designed to be replayable and you'll see only a fraction of it in each run. Also, in non-demo versions you'll be able to spend points on your next legionary based on how well your most successful characters performed.

The demo includes the first three parts of the game and is available here.

The full game is now available on Steam.

After two years of development and five months in Early Access, A Legionary's Life has been released today.

A Legionary's Life is a mostly text-based RPG where you impersonate a Roman soldier during the years of the Second Punic War and the Second Macedonian War.

Before each battle, there is a Lull phase, usually spanning over several months, where you can train, buy new equipment or engage in other activities. Occasionally, random events and encounters will happen. 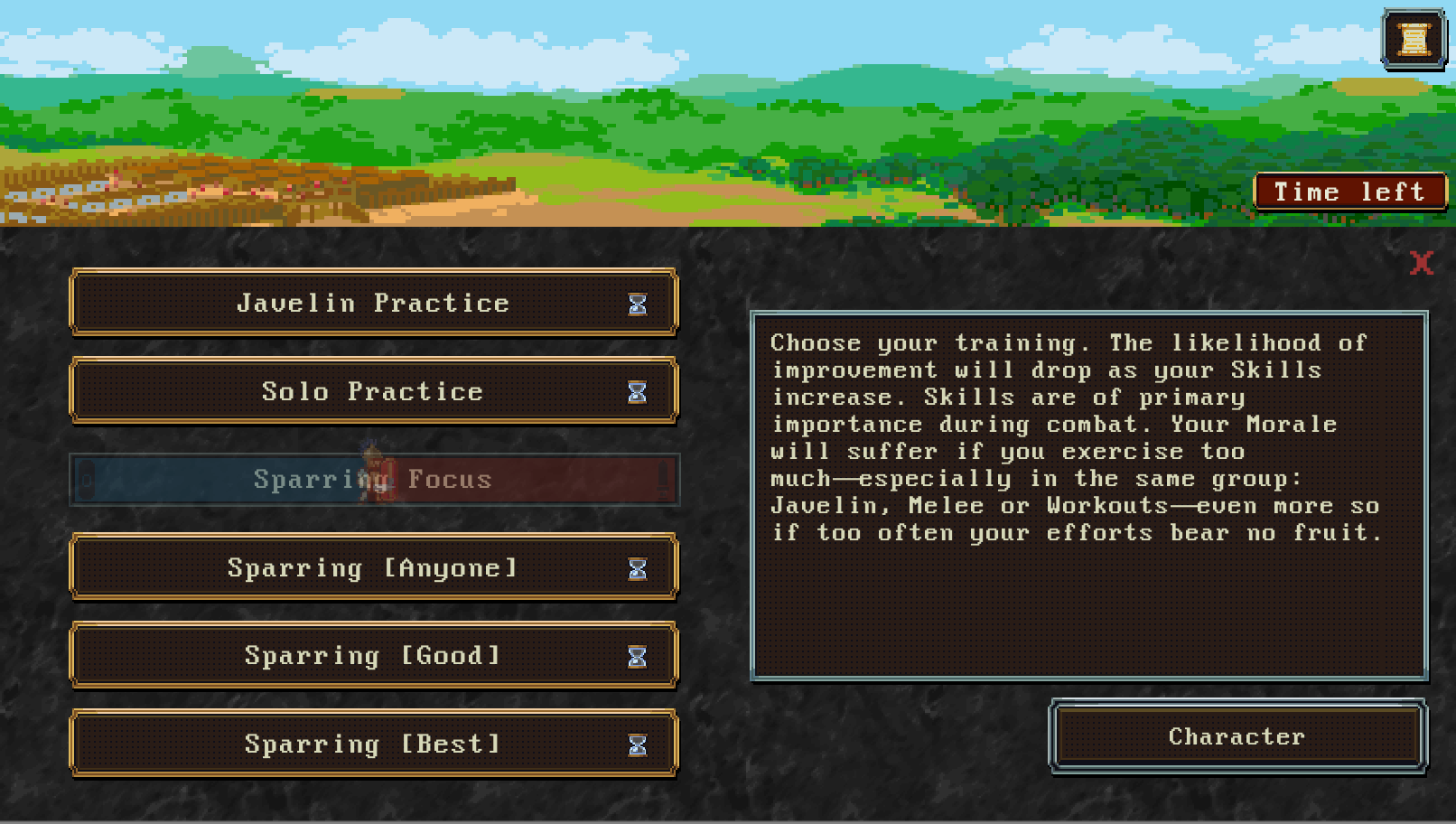 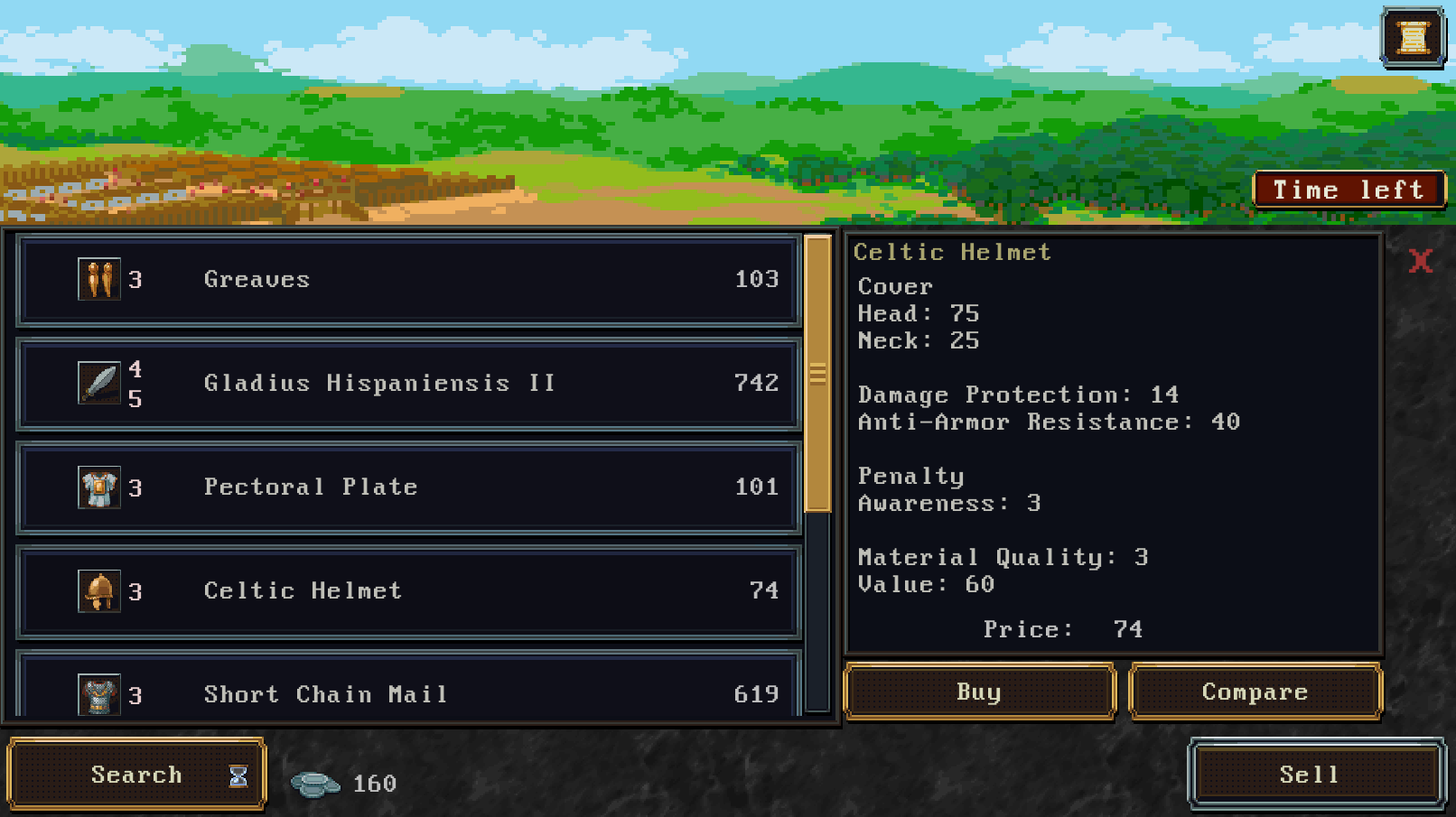 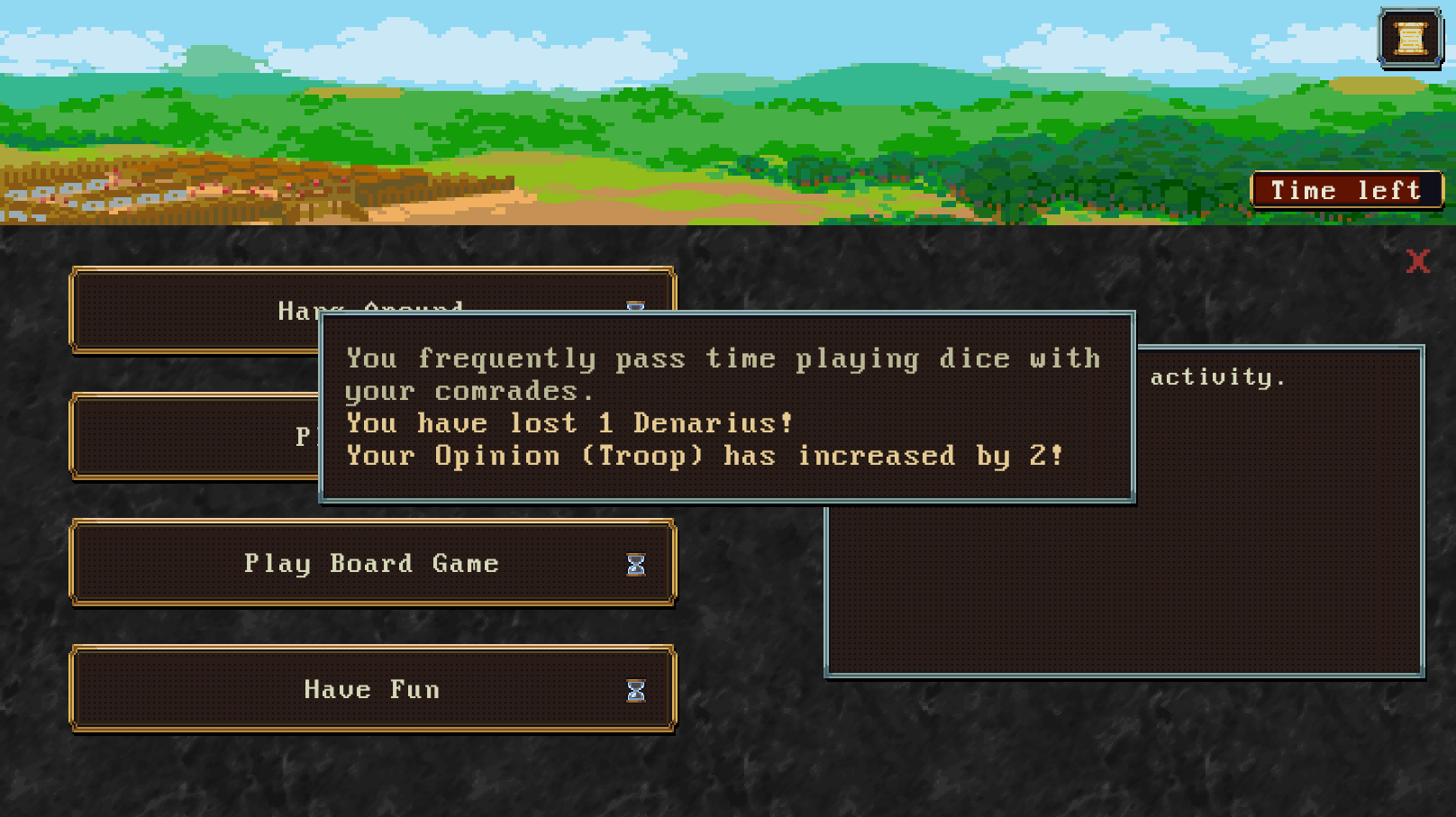 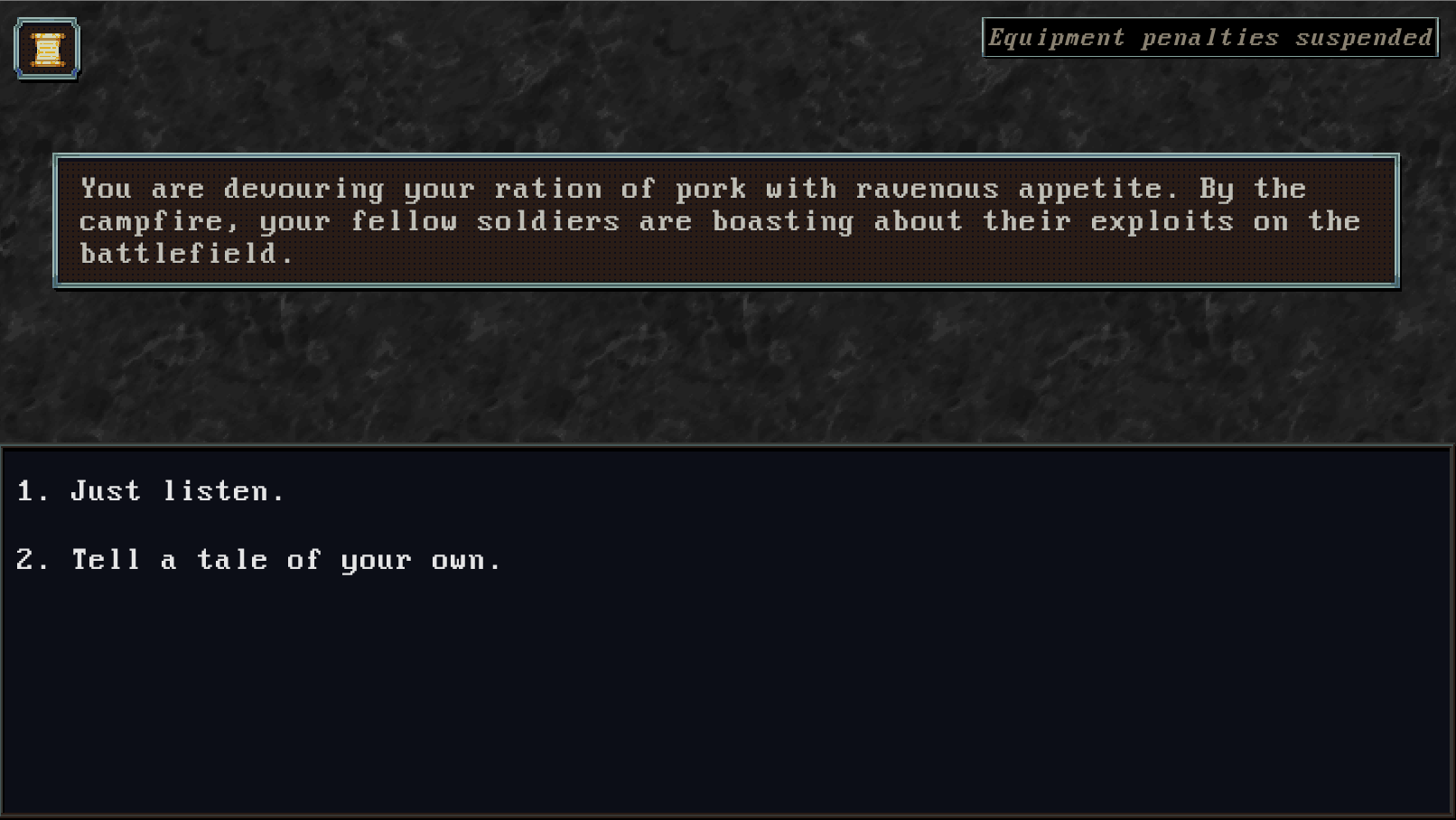 The campaigns and the main battles are heavily based on historical accounts.

Your stats are checked very frequently through the game. The higher the relevant stat(s), the better your chances, but each check has its own difficulty coefficient. For example, a check to avoid being left behind by your companions while crossing a swamp would be very easy, as you would have to do worse than all of them.

On the other hand, an Awareness check to hear a distant noise that all of your companions fail to perceive is very hard, and can be failed often even if your stat is good. 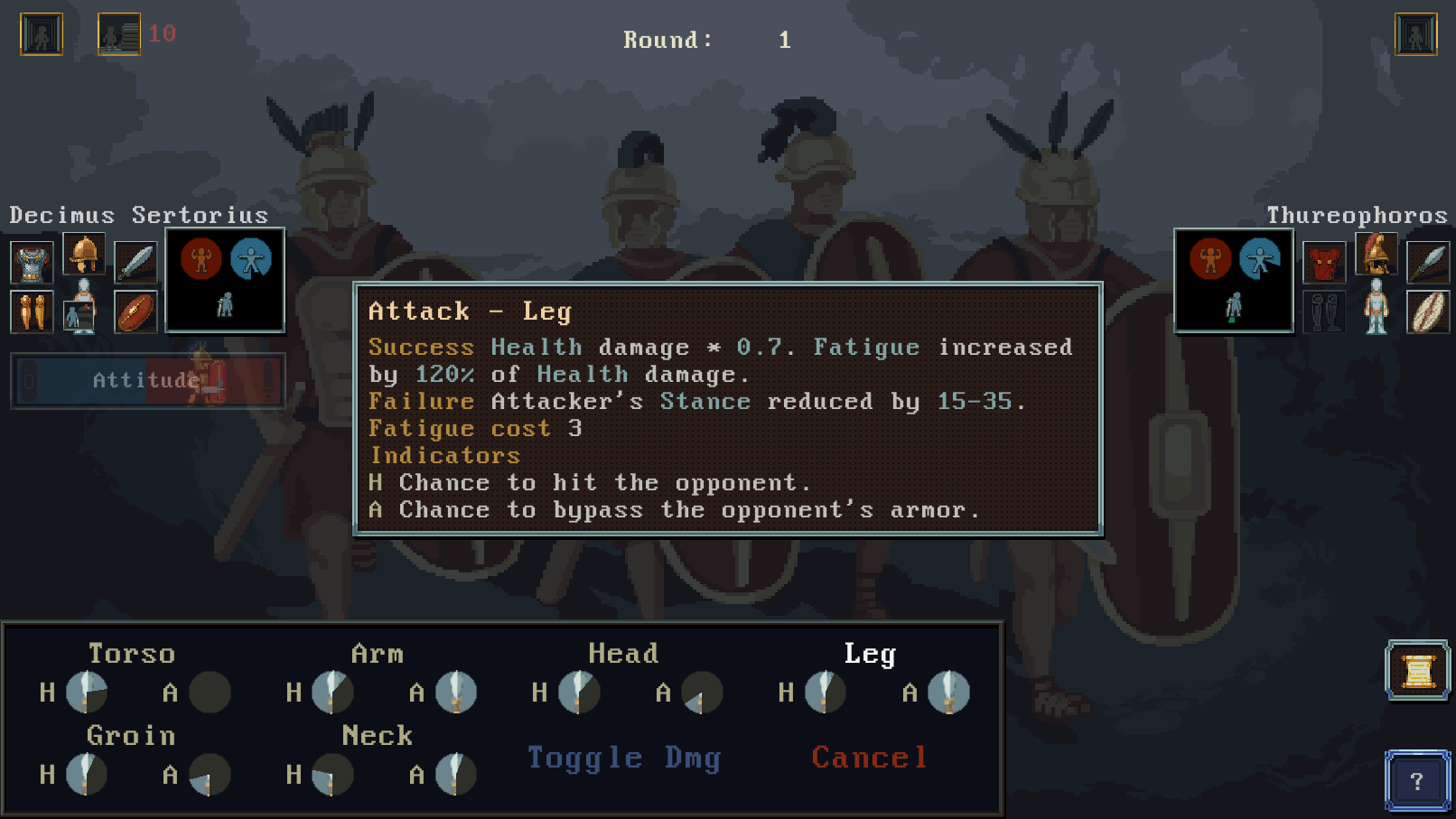 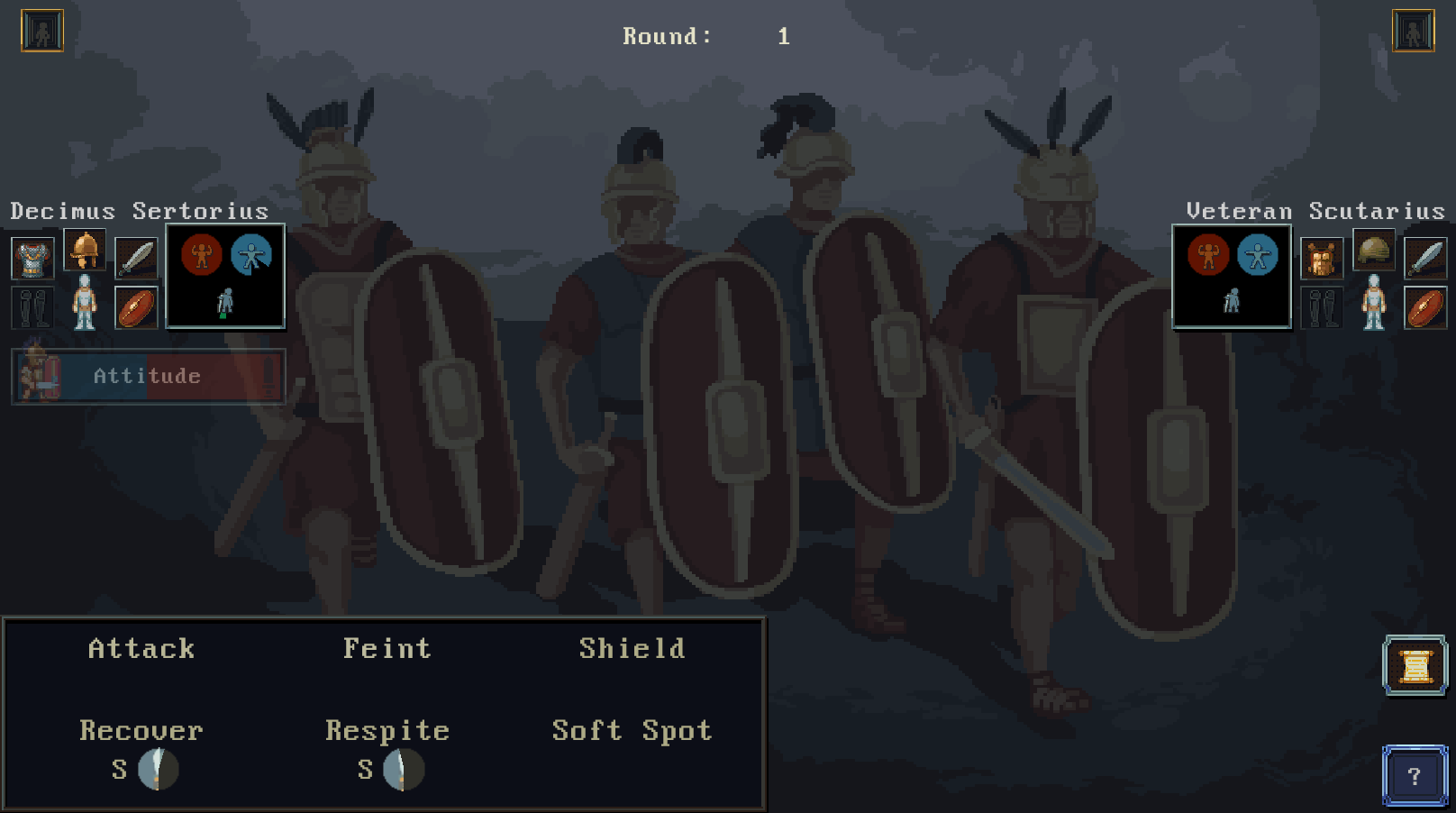 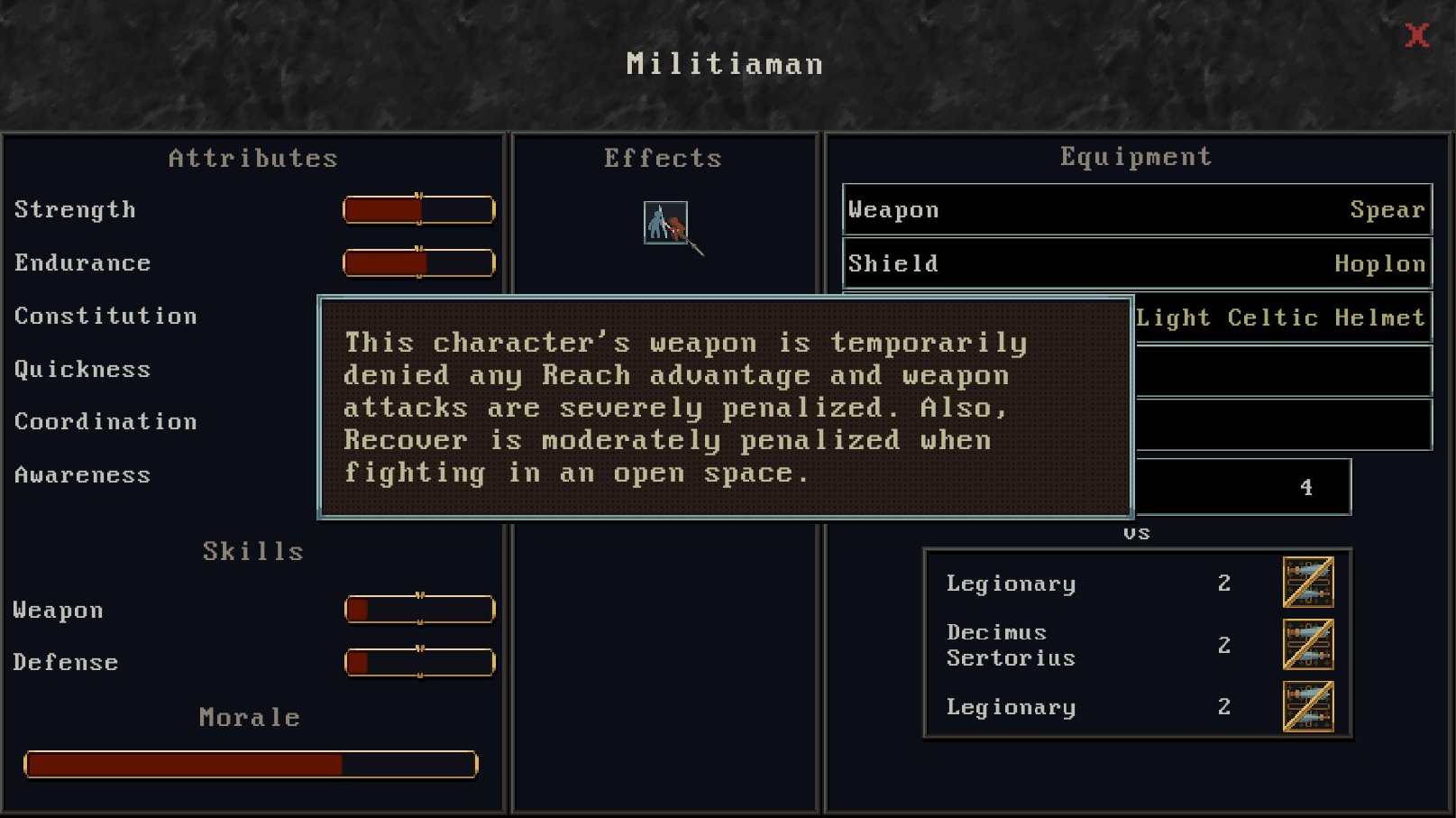 Permadeath is an important aspect of this game. Even though you get points to spend on future characters when your current legionary dies, it is much preferable to survive for as long as possible. The longer he survives, the more your character will change from a green recruit to an accomplished veteran.

Your choices will determine the difficulty level. A cautious style of play will dramatically improve your chances to survive. In general, the hardest fights are optional, though they are can be more rewarding.

The changelog for version 1.0 is here.

The Second Macedonian War, the third and last campaign in the game, is available at last!

On the road to Macedonia

This is the first major update after the Early Access version launched weeks ago. There have been many important improvements and changes, mostly based...

A Legionary's Life is finally available on Steam. Let's take a brief look at the latest news.

This demo contains the first three parts of the game. Unzip the file and run the installer.

LOVEEEEE IT. I buy it on steam an I want more. more campaings or games like that. Love the narrative and the history deepness! Thank you!

I bought this game this weekend on STEAM. I was really impressed how addictive it is. Choices matter and it is not an easy game. I usually goof around with it a little bit when I need a break from less fantastic endeavors.

Because I don't have a Windows pc at my disposal I can't play the game myself. However, I watched a few videos on YouTube and I am eager to start my career as legionary. Do you have any idea if and when it becomes available for iPad?

I congratulate you with the game as it is. How did you get the idea for this?

Unfortunately, I have not planned a release for iPad yet.

As for the idea, I had been wanting to make a game set in classical antiquity for a long time. When I read an account of the siege of New Carthage years ago, I thought it would provide an ideal starting point.

Could you explain the value of sword "handiness" in some detail? Clearly it seems to be worth a lot, just unclear as to how much value over other considerations. Very eager to play the completed game.

Handiness influences your chance to hit with weapon-based attacks, including feints. The higher the better.

Just managed to get two characters to survive the Italian and African campaigns, can't wait for the Greek campaign, this game has so much potential and you sir have done a damned fine job here.

This game is quite hard. I wish there was a save feature, where you could go to the last encounter (i.e. if you die while fighting the mercenaries in the citadel, you restart when you guys are fighting at the gates). Going through the training in the beginning time and time again can be a chore . All my characters have died at a score of 0, lol. I keep building up the green bar too fast, and I always try to attack, which I know I shouldn't do, but still. Bad strategy on my part, but when I see the 20% chance that I might succeed going for the neck shot, I'll always take it lol. Rest in peace Temdavius Poopooius 1 through 4, enjoying the game very much so far. Hopefully I'll improve at it very soon!

Just for the benefit of future readers: there *is* a save feature. You just can't reload if the player character dies.
I wouldn't want people to believe they have to play the game in one go. :-)
That said, I'm glad you're enjoying the game. Remember to always keep an eye on your Stance: when your attacks miss, your opponent is more likely to find an opening and hurt you, so going on the full offensive when the odds are sharply against you is a quick way to an early game over. Remember the optional fights are usually the toughest.

Woo! Just beat the demo. Quite a lot of things almost got me (bandit ambush, fighting the two people at the same time, etc.), but I took your advice, and didn't fight any battles I didn't have to. Some words;

First off, to everyone else reading this, I think the most important piece of advice I can give is, your goal isn't try to beat the opponent, your goal is to try to stay alive. It can seem frustrating when you keep missing your attacks, but chances are, your opponent is going to miss just as many of their attacks. Once you get to around round 20, either you rotate or they rout, and you'll live to see another battle.

The most important bar (circle, rather, in this case) during battle is your fatigue (green). Try to keep it low, it's more important than the health (red) or your stance (blue). If your stance is only down a little, don't waste your turn on recovering. Only recover when the enemy is also doing so, to have the best chance at succeeding. Respiting is very important, I try to respite every round, unless the enemy misses and loses significant stance (blue), which then can be used to your advantage and try to feint them and then attack/soft spot them.

I really didn't use the javelin or shield attacks much, so try to focus more on sword training, because I feel that sword attacks are much more consistent.

Not sure yet if there's a better way to play other than waiting for an opening and then attacking, but I've only tried to spec into javelins and shields once, and that character didn't really go too well for me.

Pay attention to the attitude bar when you're in battle, always try to be more defensive when you're respiting or recovering, and set it to be more offensive when the enemy is down on his stance (blue) and is trying to recover, so your attacks have more chance to hit. Don't worry when your losing your morale when you're defensive, morale isn't really that important, and can be gained back relatively easily, at least in this version.

Finally, a word to the developer; I felt that virtue wasn't really as big of a factor as I thought it would be, I read it would open up more encounters and stuff, but I didn't really see any opportunity to lose/gain virtue by choice, but that's probably more just on the length of the demo. On the subject of the shop, it was probably due to my low intelligence stat, but I never found anything good in the shop. I never found any leg armor/greaves, and I never found any weapons that had a reach of more than 2. Maybe make them more common to find, but it felt weird going into battle with an empty armor slot, or fighting an enemy with a spear when I only had a gladius.

Overall, great work and art direction. A bit hard for my taste, but I'm sure it'll be alleviated when the I figure out more into it. I can't wait to play more.

Well done, and thanks for your kind words!
Focusing on staying alive is one way to play the game. We could call it "easy" mode. Once you have figured out some of the basics, you can try a more daring and rewarding approach.

You are learning fast and giving some good pointers. You might be giving too much importance to fatigue, though, especially when fighting in a maniple and rotations occur regularly. Under different circumstances, for instance during a fight to the death, fatigue becomes a bigger factor.
Also, I think you shouldn't neglect your shield training–-your defense depends on it, but different play styles are indeed possible.

As for virtue, that's probably because you've played past the first battle only once. Every game is a diverse experience where different things happen. Besides, if you manage to obtain a promotion, you'll see even more. For example, you'll be occasionally put in charge of a foraging party.

As to merchants, I've just made a few tests and greaves popped out 20 times out of 51 attempts during Phase I and 12 times out of 29 attempts during Phase II. Maybe you just had bad luck.
You won't find spears on sale. The legionary's weapon is the short sword. You often fight in formation: using another weapon would be a disadvantage. There are 9 types of short swords anyway. Also, don't look just at the reach, a gladius has several advantages over a spear; for example, if you perform a successful strike on an spear-wielding enemy, he'll be in serious trouble, with his reach advantage denied and harsh penalties applied.