Initially a fork of 0AD, the realtime strategy game targetting city phases and fun play, it combines RPG and co-op features with RTS. It simulates world history starting at 200 000 B.C.E. and features realism like flow of time, lively atmosphere, civilization merging and foundation, day night cycles, seasons and an elaborated tech, commander system as well as a hybrid AI for RTS-RPG style game play (coop, p2AI, AI2AI, p2p). Travelling time may give rise to questions about the circles the world seems to be caught in, e.g. conflicts, misunderstandings and group, personal interests to the disadvantage of the beauty of the world and nature. 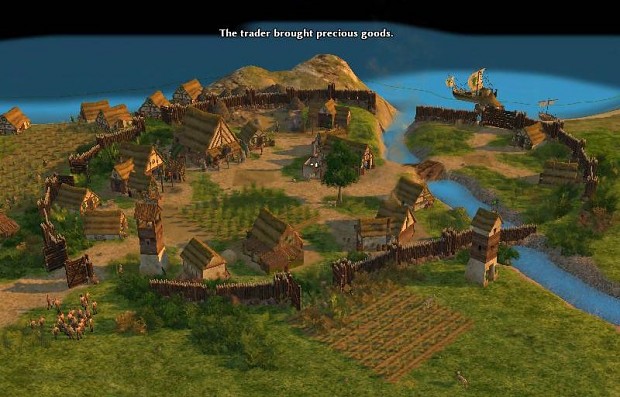 Screenshots of the great sceneries created by Niektb and Shieldwolf from the Council of Modders.
Wildfiregames.com

The series of videos and images may serve to give a general idea of the development state of the campaign system (one of the last missing blocks next to seasons/cycles and the capability system).

The campaign system in 0 B.C. (while proclaimed in other 0AD forks such as Byzen but never shown in action) consists of several layers, lower and higher detail, not being separated, but streamed, maintaining the previous state when entering e.g. a battle by loading a detail map.

The current insight shows the storyline machine that handles the overall story actions in a convenient way in addition to triggers.
If you ever tried to create a complicated story using triggers only, then you might see the preferences of a storyline machine (in case of 0BC Time Machine, several of these machines coexist and allow for multiplayer and dynamic reassignment, which next to minor C++ changes for building blocks may require a further rework of the JavaScript trigger system to allow for tighter integration of the storyline machines and add functionality the storyline machine depends on to be dynamic).