Download and installation instructions are available for Windows, Linux and Mac OS X. 0 A.D. is free of charge and always will be. You can redistribute it and modify it as long as you abide by the GPL. You can even use parts of the art and sound for your own projects as long as you abide by CC-BY-SA. No "freemium" model, no in-game advertising, no catch.

Top new features in this release

All-new dynamic territory design. Territories change throughout the game based upon the structures built by the players. Each structure has a "weight" given to it and a radius within which this weight has an effect based on the importance of that building, and these values affect borders proportionally. If one of a player's buildings falls into enemy territory due to shifting borders, then that building is planned to slowly lose loyalty until finally converting over to the enemy's side. (In the meantime, in 0 A.D. Alpha 7 it loses health instead, until it is destroyed.) This can be stopped and slowly reversed if the border shifts and the building comes back to the player's side. 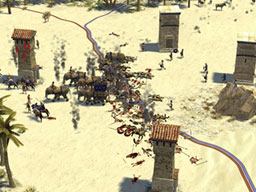 Screenshot of Hellenes (red) engaging in combat with Carthaginians (blue) across a dynamically rendered border. CC BY SA Wildfire Games.

An all-new and unique Carthaginian civilization, including: 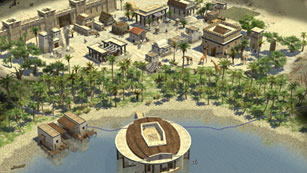 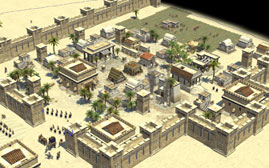 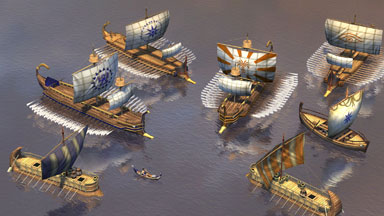 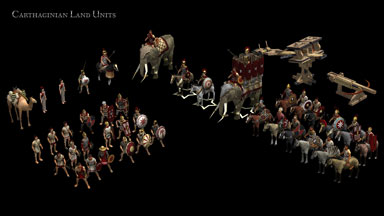 A brand new main menu design with new dynamic background, depicting the Spartan tradition of mothers sending off their sons to battle, telling them to come back either with their shield or on it. (Thanks, dashinvaine!). The menu and UI graphics have all been converted to the new style. 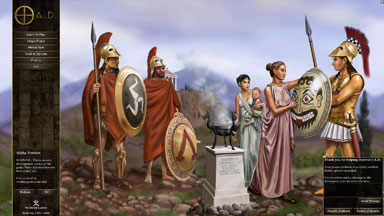 100+ new sound effects from the DynamiteSoundBytes team, dozens of them audible in-game.

(REPORTERS/BLOGGERS, PLEASE MENTION THIS! We need your help to finish the game. Thanks.)

We are seeking contributors in programming, art, sound, web design, taking YouTube videos and more. These roles on the 0 A.D. development team are great if you want to brush up on your skills and update your portfolio, if you're seeking a project for school with real-life applications, or if you care about the cause of free culture and software and are willing to work pro bono with a group of dedicated volunteers from all over the world.

Interested? Please register on our forums and start a new topic introducing yourself in the applications and contributions forum following these instructions.

Who were the Carthaginians?

The Carthaginians, or Punics, were an ancient civilization centered on the Phoenician city-state of Carthage, located outside what is now Tunis, Tunisia. The Carthaginian culture is one of the most mysterious of ancient times. Little remains of the Punics' literature and none of their history, except what was recorded by their bitter enemies the Greeks and Romans. From these sources we deduce that Carthage was originally founded by Phoenician nobility from Tyre, a city in modern-day Lebanon, and it gained independence around 650 BC. Carthage soon became a formidable force in the western Mediterranean, eventually taking over much of North Africa and modern-day Spain. Over time, Carthage established a network of some 300 colonies and many tributary states, and forged exclusive trading rights agreements with various partners, effectively turning it into an economic powerhouse. 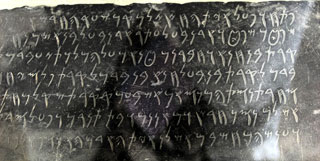 
Carthage was remarkable in other respects as well: Its political system was a mix of monarchy, aristocracy and democracy, which relied on a system of checks and balances and ensured a form of public accountability; It had a pantheon of several interesting gods, including Ba'al, Ishtar and Tanit; And it posed a formidable military force, with several great differences between its ground forces and its navy.

Carthage's ground forces were primarily made up of allied peoples and mercenaries, including Libyans, Numidians, Iberians and sometimes Greeks. Carthaginian citizens served in the ground forces almost exclusively as officers, and were only required to serve as infantry in special cases. This ethnic divide led to a deep suspicion of the ground forces among the Carthaginian elite. The Carthaginian navy was quite a different matter, though, as sailors were often recruited from the lower classes of Punic citizenry, which provided them with a stable income and career. No doubt, this contributed to Carthage going down in history as having one of the largest and strongest navies of ancient times.

Carthage went to war several times with Rome in a series of events that came to be called the Punic Wars. The First Punic War was a clash with Greeks and Romans over control of Sicily. By its end in 241 BC, however, Carthage had lost Sicily to Rome. Corsica and Sardinia soon followed. Later, Carthage conquered Hispania, sparking what would come to be known as the the Second Punic War (218 BC – 201 BC). By the end of the war, Hannibal had crossed the Alps in attempt to invade Italy from the north, and he had resoundingly defeated the Roman army in several battles, but never achieved the ultimate goal of causing a political break between Rome and its allies. Eventually, the war was taken to Africa, where Carthage was defeated at the Battle of Zama by Roman general Scipio Africanus. The end of the war saw Carthage's control reduced to the city itself. Carthage's vast area of influence was gone. 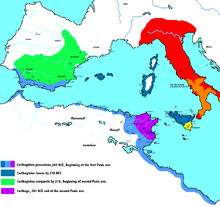 Carthaginian dependencies and protectorates through the Punic Wars.

In the fifty years since the Second Punic War, Carthage visibly restored some of its wealth and martial power, yet was still a client state of Rome. A weak Carthage was arm-twisted by Rome to go to war and undergo an extended siege, ending in the city's thorough destruction, in a conflict now known as Third Punic War (149–146 BC). All remaining Carthaginian territory was annexed by Rome, and over 50,000 people of Carthage were captured and enslaved. Thus, the Third Punic War ended Carthage's independent existence.

The Punic language and ethnicity continued in other Punic cities, however. Records of people speaking Punic date as late as the days of Christian theologian St. Augustine of Hippo (354-430 AD), suggesting that Punic cultural identity survived centuries of foreign conquest.

In 0 A.D. the Carthaginians will have many bonuses that match their historic strengths. These include:

We name our releases according to development status ("Alpha" or "Beta"), successive release number (1, 2, 3, ...) and a word relating to the ancient world, in alphabetical order ("Argonaut" for A, "Bellerophon" for B, ...). In honor of the release of the Carthaginian faction, we decided to dub Alpha 7 "Geronium". (Thanks, mrjeremister!)

Geronium was the site of a battle in the Second Punic War, in which Carthage, led by Hannibal, won a small tactical victory against Rome in 217 BC. The Carthaginians had cut a swath of destruction in their southward march from the Alps throughout the Italian peninsula, ravaging farms and property, and collecting provisions and prisoners as they moved. They were followed by a Roman army that mostly avoided open confrontation in pitched battles in favor of a war of attrition designed to wear the Punic army down. (This tactic was highly unpopular in Roman political circles.)

By 217 BC, Hannibal reached near the modern-day village of Casacalenda, in what is now the Molise region in Italy, and took over a town named Geronium, using it as the Carthaginian winter quarters, while setting up a forward camp next to the Roman forces. As the Roman general was summoned to Rome to defend his tactics under the guise of a religious obligation, his army was left under the command of his deputy. Under the deputy's command, Rome managed to kill many Carthaginian foragers trying to stock up for winter, leading to a Carthaginian retreat from their forward camp. This was rewarded in Rome by promoting the deputy to an equal rank to that of his general, which caused an internal division within the Roman army.

Location of modern-day Molise, Italy. Geronium was a town in this area.

In the Battle of Geronium, Hannibal and his forces laid an elaborate trap and successfully attacked one part of the Roman army, mauling it severely. The Roman forces, however, promptly received reinforcements from the other part. Both Romans and Carthaginians retreated, and only small skirmishes between the sides followed throughout the winter.

As for the remainder of the war, this battle had less significance than the subsequent resounding defeat of the Romans in the Battle of Cannae in 216 BC, one of the greatest tactical feats in military history. (Source: English Wikipedia: Battle of Geronium.)

For the next alpha, we welcome fan suggestions for words relating to the ancient world beginning with the letter H. Keep it original and within the 0 A.D. time-frame (appx. 500 BC - 1 BC)!

Wildfire Games will keep releasing new versions of 0 A.D. from time to time. Watch our news feed to get updates, or follow us by e-mail, RSS, Facebook or Twitter. And you're always welcome to join the 0 A.D. community on our forums.

Contact info for press, bloggers, etc.: aviv@wildfirePHALANXgames.com without the name of the ancient Greek military formation written in all caps.

Just a heads up, in the news post the first four paragraphs under "Top new features in this release" are identical.

Fantastic work. By the way, are you guys planning on adding ragdoll and real-time physics to building destruction, naval ships being sunk, and soldiers being killed in combat?

Manpower for a physics engine is limited. We could look into it if there was either a freeware or cheap alternative available. Right now we are focusing on stability, fixing various workload pipelines, adding new gameplay features and new factions, and tightening up pathfinding and AI.

What is this, a first person shooter? You are asking way too much. :p

Ragdoll physics and genuine real-time physics in an RTS isn't asking all that much. In fact, its quite standard to have that in an RTS game nowadays. Indie is a different story, but the question still stands.

This looks so much better than the last release. Can't wait to try it out.

Another great release... For a new Alpha, there's sure much changed. I like it! :)

:) I played this alpha for about 3 hours. It's in alpha-stage so no wonder there are still things to build and polish. But the overall feeling was great. I'm quite impressed. The user interface is quite light and so far I encountered a few minor issues:

1. The mouse is not as snappy as it is in the main menu. I got the feeling it's slightly lagging.
2. Sometimes the game chokes for some reason and moving around on the map is slow because of it. It happened even with few units in sight so I suspect it's not a rendering stuff. (my video adapter is a Radeon Mobility HD 3470 256MB RAM, Linux Mint 9 32bit - based on Ubuntu 10.04)
3. Using too many gatherers (15-20) to get meat from wild animals will make them block each other, especially when the animal is on the edge of the map.

These are probably known issues considering I heard many people talking about 0 A.D. but maybe it helps. Great game so far! :) Many thanks to everyone involved for your effort and hard work! :)

Are you going to add sticky walls that don't leak in enemies? :) Me and my mates are having a bit of problems with that... Also is there a posibility with garrisonable walls in the distant future?

I LOVE the game, it's really fun and looks great!