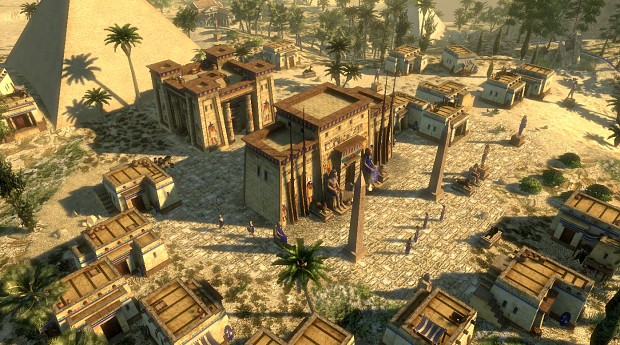 Amazing, it's great that you are including the Hellenistic successor states!

love the attention to detail you guys put in

The Egyptians couldn't just be missing from an ancient-themed game. Great work!

I agree, it was this game's greatest flaw, the lack of Egypt, its just needed in an Ancient/Classic Age game, that plays around the Mediterranean.

This game is looking awesome so far.

But how are you Wild Fire crews going to distribute this marvelous game when it is done?
Wish I had a better machine by then.....

We will distribute the game via the Internet for free. When the time comes, we will look into releasing the game via as many avenues as possible, Steam, Indie Bundle, etc.

The lighting in this is gorgeous :)

Enrique and the Art Dept has been busy whipping up a whole new faction, the Ptolemaic Egyptians. While the units aren't ready, the buildings are coming along nicely. Here is a sneak peek.

"The Ptolemaic dynasty was a Macedonian Greek royal family which ruled the Ptolemaic Empire in Egypt during the Hellenistic period. Their rule lasted for 275 years, from 305 BC to 30 BC. They were the last dynasty of ancient Egypt." - Ptolemies 0 A.D. civ profile.