An introduction to Orkward, the space ork dating game.

Hello, I'm Joe, and to my surprise, I've spent the last two months on sabbatical making Orkward: the space ork dating game. It's in active development but available for free on itch.io. This the story of its development. 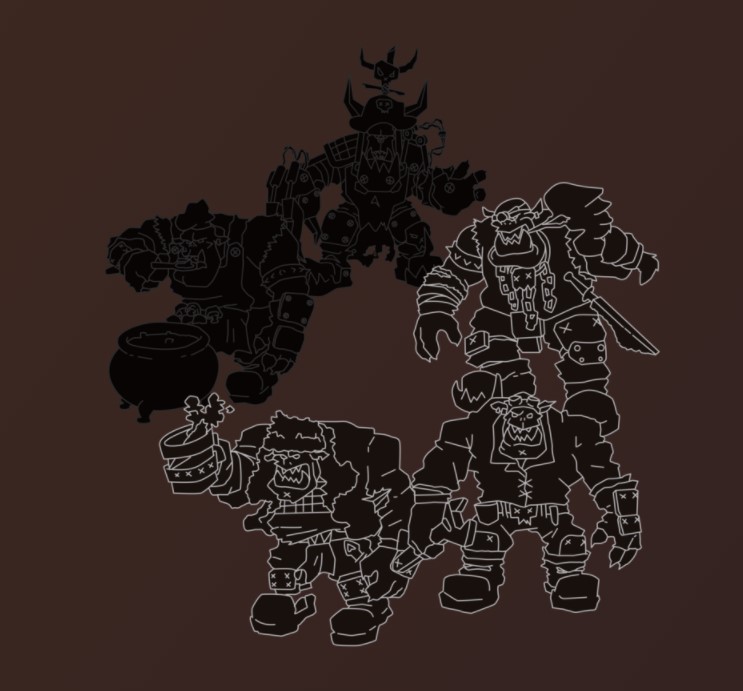 Orkward is a lightweight visual novel, or a piece of interactive fiction with a few pictures, made with Ink (a scripting language by Inkle). Over the course of the game you get to chat to five different orks and unlock three different endings. Content is still in development but there's about 5,000 words right now. You can hit an ending in about 10 minutes, but there's probably about an hour's worth of content if you want to go through and do everything.

How did it come to this?

I don't really know what compelled me to write a space ork dating game.

The idea sort of came to me a couple of years ago, while I was arranging my tiny collection of Warhammer Orks. You see I painted half a dozen orks in the autumn of 2011 - blissful days spent hunched over in dubious light with music playing - and never got around to finishing the set. But the boyz have been sat on my desk ever since.

Anyway, a couple of years ago I was dusting them down. I'd just joined instagram and was thinking about creating a series of something to post: poems, perhaps or maybe cartoons. And I thought: wouldn't to be funny to post a picture of an ork with a sort of tinder profile. Like, "Chompa - likes shootin' stuff, goin' fast and long walks on the beach". Here's a mockup of the sort of thing I was thinking about: 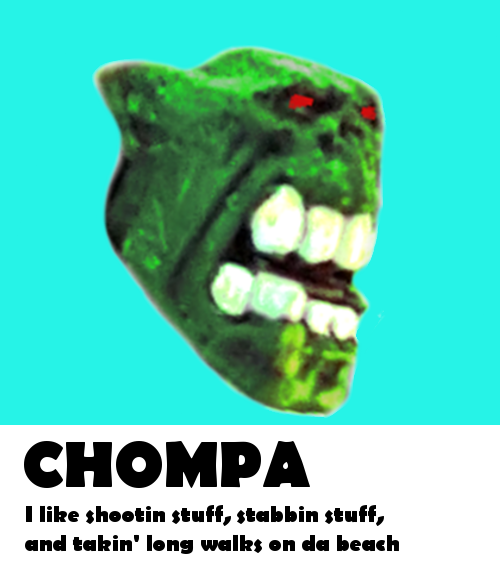 Well, I thought it was funny

This idea didn't go anywhere, obviously. That's partly because I couldn't be bothered with all the work involved in trying to make it funny. But mostly because it was an awful idea.

Time for a Break

A few weeks ago, I left my job. I've been feeling tired and burned out for a while. I've been getting impatient and frustrated, struggling to be creative and totally unable to write (I'm a writer and words have historically been my primary coping mechanism). I figured the best thing for me was to take a break and recharge my batteries.

I'm very fortunate to have saved up a bit of money over years, so I'm blessed with a short runway to sort myself out. I'm very aware that not everyone gets a chance like this.

So, without wanting to put too much pressure on it, inducing more stress and burnout, I wanted a project. Something to work on during the day with a fairly chill routine, like 10am til 4pm, maybe just four days a week. Something to keep the brain ticking over and get the creative juices flowing again.

I absolutely was not going to spend the time playing Fall Guys. Nope.

I scratched around for a week writing some truly terrible fan fiction. And the weird thing is: it worked! I put out about 20,000 words in a week and published them to a dark corner of the internet under a secret pseudonym. I felt great!

For the first two weeks or so I was trying to work out what to do with my time.

I wanted a project I could deliver before I ran out of money. Three months, at the most. I'd been working on some game prototypes but I'd never get them into a releasable state in that time. I've got a few novel ideas I could work on - but again, I couldn't see how I'd get a draft together by Christmas. 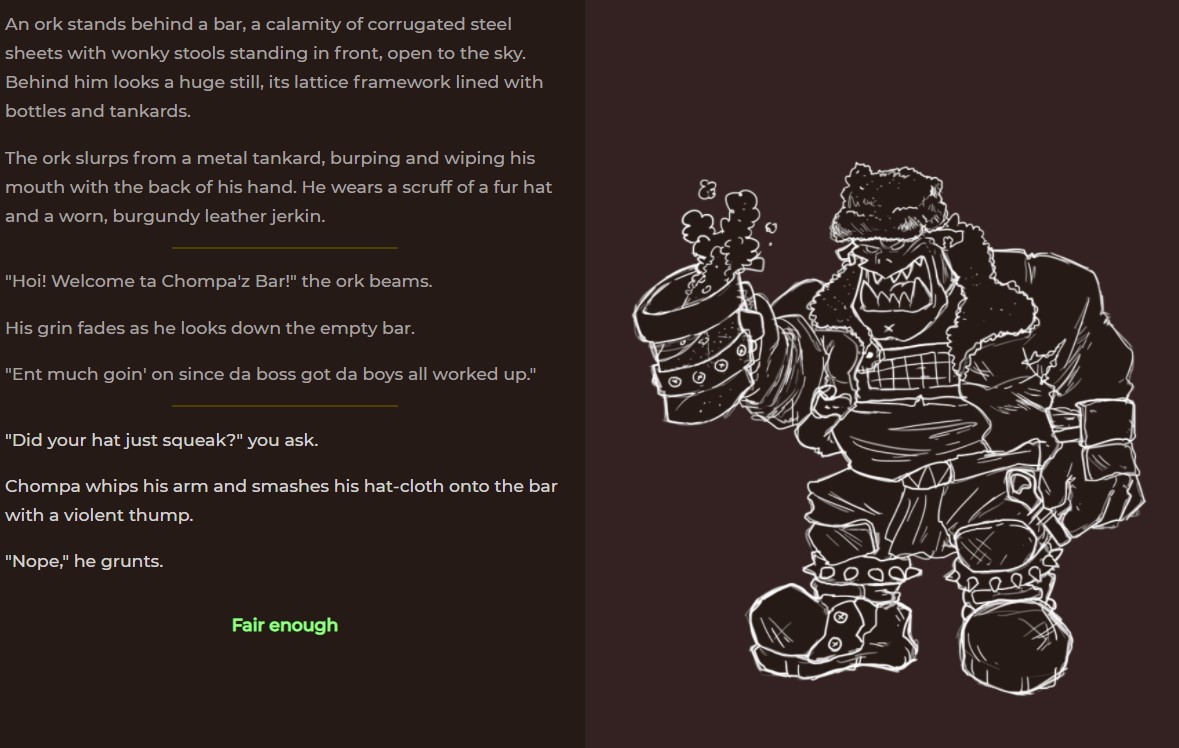 Then the ork dating thing popped into my head, late one night - and I couldn't resit. An ork dating simulator. A visual novel where you have to chat up - well, survive a conversation with, really - a bunch of orks. And upon chatting to the orks you discover their secrets. Not a romance game, more like a text-based adventure where the puzzles are conversations.

For quite a while it was called Ork Dating Simulator and I wasn't really sure how seriously I wanted to take it. I knew I wanted to release it on itch, but how much time, money and love did I want to give it? The first version only took a week to string together - was that it? 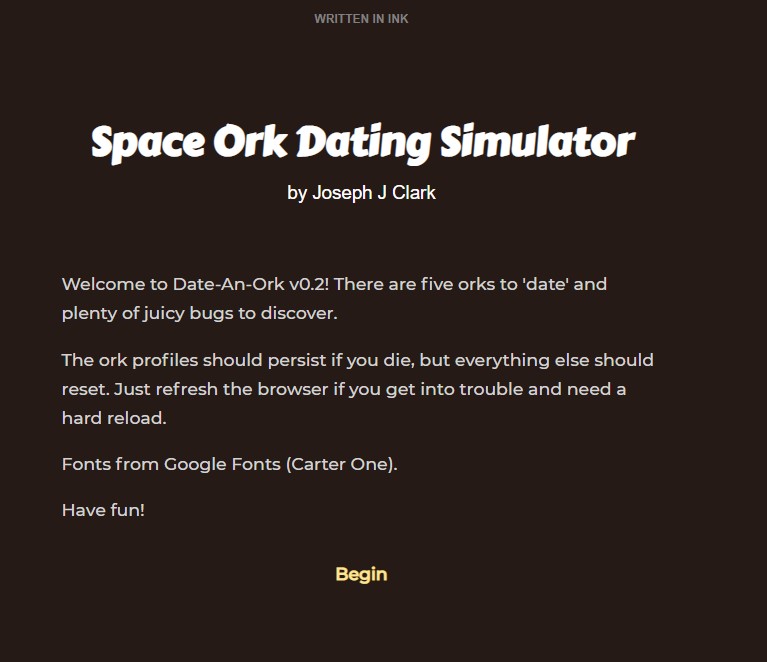 An early title screen, made with Ink

Then the title hit me: Orkward, as in a play on 'awkward', but also as in 'towards the orks'. I mean it was just perfect - and then I knew I had to make the best game possible with my time.

It's been quite a journey over the last few weeks. I've learned a lot and had fun with it - so I thought I'd share some of my experience in a developer journal.