A HUGE new open-world roguelite singleplayer game mode is coming to Bossgard, as well as a Viking Versus Viking Multiplayer Mode. Check this out...

Autumn is upon us and we deemed it only natural to answer to Nature’s seasonal changes with changes of our own, in the form of a series of huge updates. To that end, the tl;dr verison is this: Viking versus Viking is this week’s upcoming Multiplayer game mode AND a Singleplayer rogue-lite open-world mode is coming to Bossgard. Buckle up, it’s a long read :)

The Vikings are here to undo Ragnarok and set history right, but the war against bread continues and the Bosses, avatars of the ever-elusive Eye remain as much of a threat as before. As friendships are tested and new fellowships are forged, the Vikings look for new ways of tempering their fighting skills.

And what better way is there to do so if not through a friendly bout? 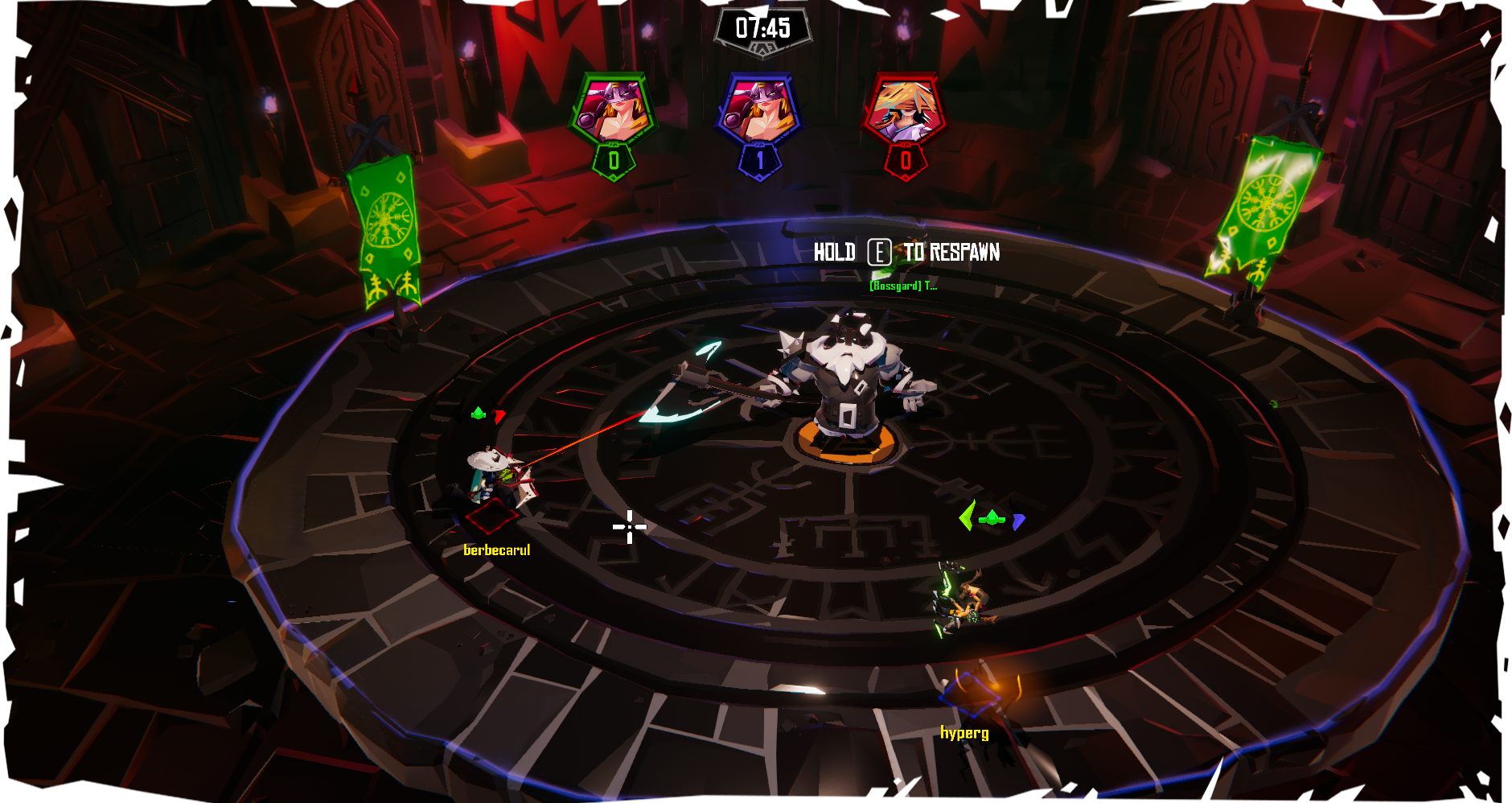 Our latest update for Bossgard brings forth a feature we’ve been wanting to do ever since we finished our combat mechanics. Because hey, if 2 VIkings can fight a bread Boss, why couldn’t they fight each other?

That being said, this update comes with 2 possible game modes for Viking Versus Viking.

It’s each Viking for itself in this chaotic battlefield filled with skeletons, sentry guns, poisoned shots and feral sabertooth pets. Deploy every weapon in the Viking’s arsenal against your frenemies and make sure that Kill count goes up for you and you alone! First Norseman to reach a target score or to hit the highest number of points by the end of the timer, wins! 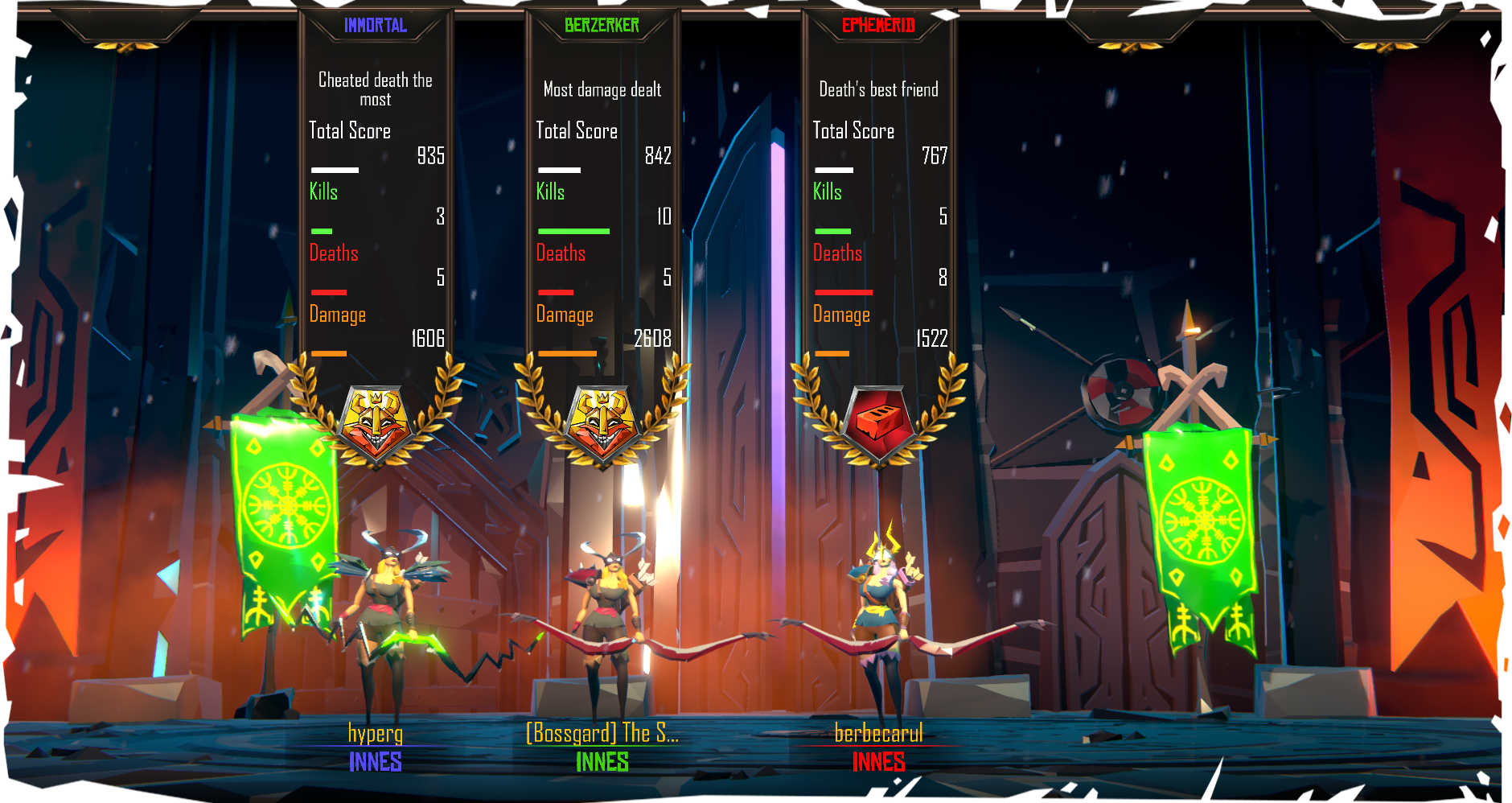 Up to 6 players can join in 3 v 3, 2 v 2 or 1 v 1 matches to settle to score and see who’s the toughest warband in Valhalla. All the usual combos apply so you can Gankorama, Sicken or Slo-Mo your enemies all the way down to Helheim. Split roles among you and find the optimal team composition!

The journey into Viking Versus Viking has just begun, Free-For-All and Team Deathmatch being our earliest and simplest incursions into symmetrical PvP lands.

Here are several game modes we want to bring to the game sometime soon.

Two opposing Viking Clans have set up strongholds and are trying to raid one another, hoping to prove themselves as children of Odin. Waves of Minions march against the enemy Clan and brave Viking Heroes come forth to maintain the momentum of their faithful henchmen. Across the battlefield lay dormant Giants, waiting to be challenged by the warring Norsemen, so that they may grant their loyalty, joining the ranks of the stronger Clan. As the last stones fall from the besieged Stronghold, the losing Vikings fall prey to desperation and turn their prayers to the Evil Eye, who joins the losing side in the shape of a great Boss, in hopes of proving that true, evil power will succeed where futile bravery had failed. Should the Boss fall as well, only then will the most righteous Viking Clan claim dominion over the afterlife.

This is still way under progress so we won’t expecting Ragnarok Mode to hit Bossgard for another month or so, but we wanted to let you know what’s in store for PvP.

As you step on the cold stones of Valhalla’s corridors, way beyond the whisperings and mumblings of the Gods, you see a great gate, larger than any of the doors before it, colder than the most shivering Viking thoughts and stronger than the bindings of Fenrir. It is the only thing that separates Vikinghood and Godhood from complete oblivion. It is the Gate of Bossgard - the frozen wasteland caused by the distortion of the end times, the result of the Evil Eye’s meddling in Viking Chronology.

After ages of battle against the Bosses, avatars of the Evil Eye, the Gods deemed you ready - ready to step through the Frozen Gates and into madness itself. Only by your hand can the Gods hope to undo Ragnarok and set history right. Steel yourself, Hero, the journey will not be easy. You will fall. You will fail. You will try again. And again.

And again. But blessed is your immortal soul for here, in Bossgard, time and nothingness are eternal. What once stood upright will stand so once more, even after a fall.

Rise again Hero, shake off the snow and dust and venture forth once more. The Evil Eye must be hunted down. History must be undone. But make haste, the Gods’ favor and warmth can only keep you alive for so long, lest you should fall and try again.

Hunt for the Eye, defeat Evil itself and undo Bossgard.

Shortly after we set off to make Bossgard, we started thinking of how we could develop a solid, self-contained singleplayer experience.

We always wanted to create a part of the game that would be more immersive and more player-centric than the party-game side. We needed a play space where everything cooky about the game could come together and start making sense. Bossgard is just that, it’s Nordic mythology, mixed with silliness and our personal twist.

This whole new chunk of the game would have to be replayable and feature a completely different player point-of-view (3rd person) but would have to play out using the same combat system as in Multiplayer.

The idea of a rogue-lite quickly sprung to life and seemed the most plausible approach given our team’s size and possibilities. We started looking at what other titles are doing (and doing well) and we came up with a shortlist of features drawn based on other video games we look up to (including Risk of Rain, Warframe, Crawl, Dark Souls, even Gothic).

A singleplayer rogue-lite open-world experience where you must traverse and survive the frozen wastes of Bossgard in an attempt of locating and defeating the Evil Eye.

Roam the white desert clinging to landmarks, shrines and anything that can provide aid and safety in the face of adversity.

Locate the Guardians, defeat them and summon the Boss. Bossgard is protected by the Evil Eye’s strongest Minions, each with its own gimmick.

Bossgard features a new player perspective and is a spin-off of our Multiplayer combat system. Face the Minions of the Evil Eye in glorious 3rd person view! Deal Mighty Blows, deploy Shields and Heal yourself just as you would in Versus Mode. 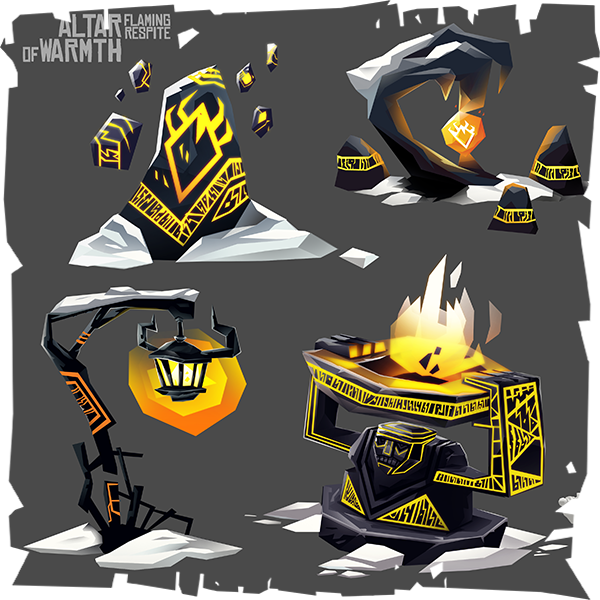 The race is against the clock as you can only survive as long as the Warmth of the Gods is active. This wears out and you need to find ways to replenish it. 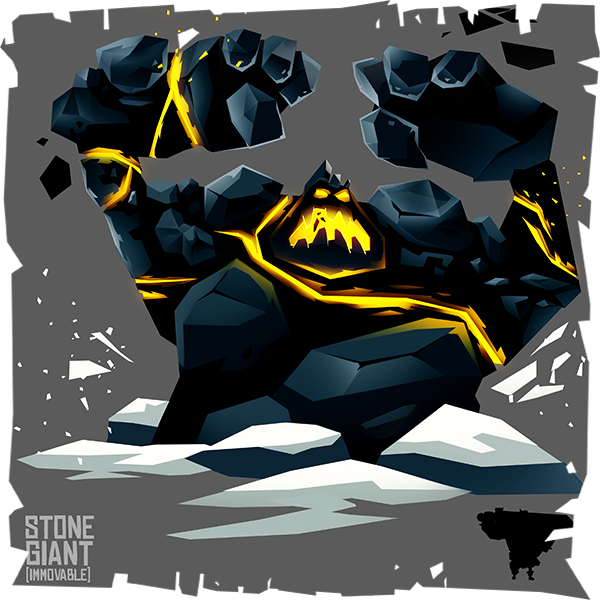 Level up and upgrade your character. Various stats define your Viking, making it possible to adapt your Hero to your playstyle. But whatever your spec might be, Bossgard will challenge you on all fronts. 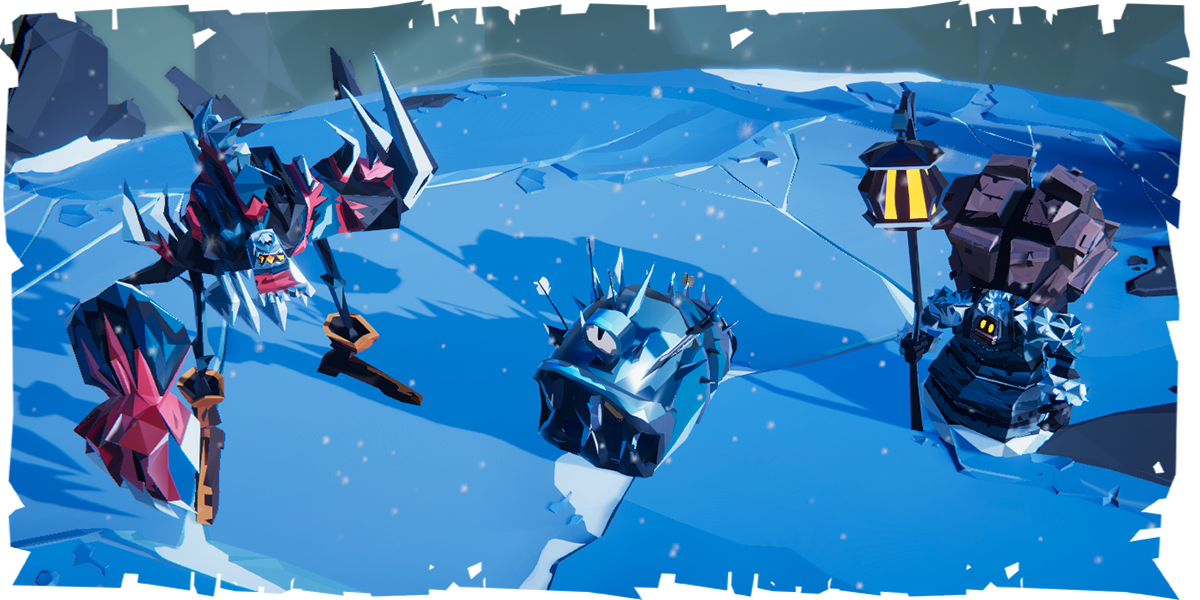 Bossgard is dangerous and roamed by various creatures. Some you have already met as minions of the Bosses, but there are many other creatures that lurk the wastes. But beware, the weaker you are, the stronger the Minions of the Wastes grow. 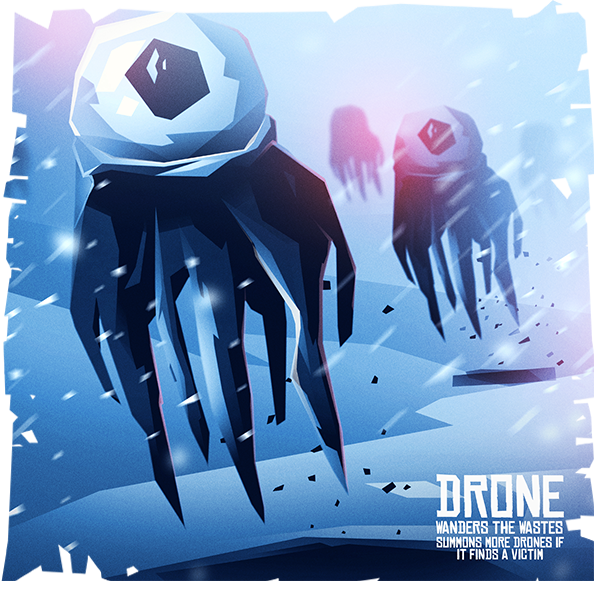 Monsters are broken down into tiers and factions. Everything from hordes of simple Crumblings and Bloaters to specialized groups of casters, warriors and rangers roam these lands with one sole purpose: to see you fail. 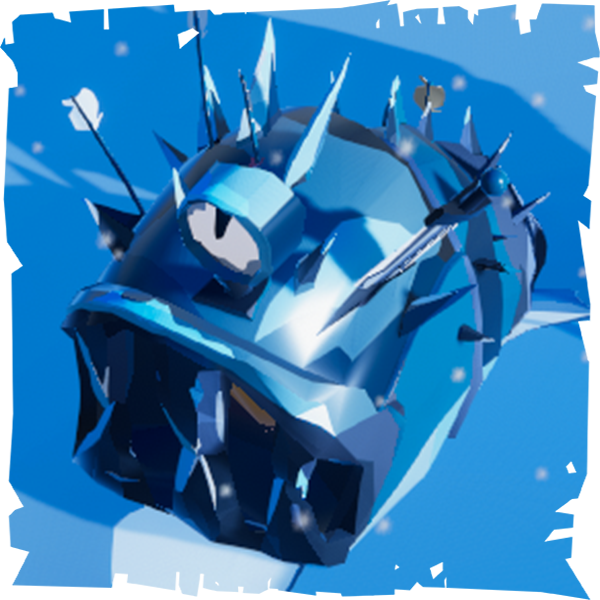 What you earn in Singleplayer carries over to Multiplayer. The loot you get in Bossgard is yours to keep (should you make it out alive). There are also Bossgard-specific items you can show off in Multiplayer once you learn to master the Wastes.

As you can see our it’s a pretty huge chunk of gameplay and we’re striving hard to meet our own ambition. By the end, Bossgard should feel like a well-rounded game that can be enjoyed by a variety of players, in a variety of ways. 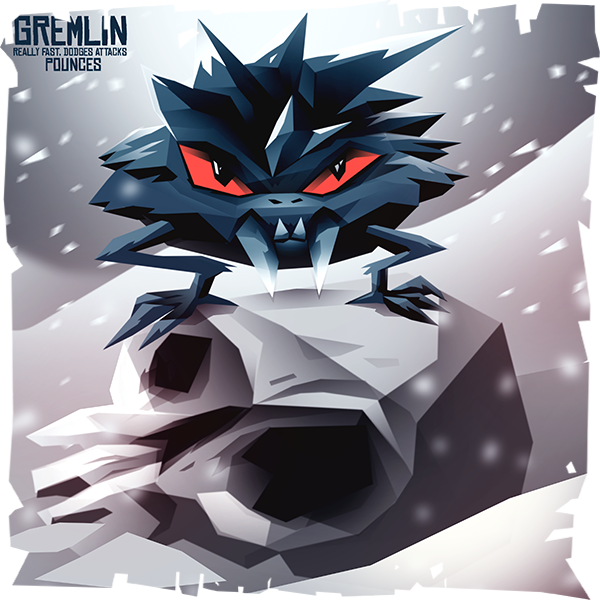 Do let us know what you think, we’ll make sure to keep you posted. Till then, we hope you’ll enjoy the upcoming Viking Versus Viking game modes.

Thank you for reading! See you in-game!