Welcome all to the top upcoming Apps of 2014 as picked by you! It was a stiff competition this year with a great variety of apps up for nomination. So without further ado, We are delighted to present your Top 5 Upcoming Apps. We are also announcing the Top upcoming Mods and Indie games, you're invited to check them out!

Ember Guards is an exciting game with amazing graphics and dynamic gameplay in the best traditions of the Tower Defense genre. Dive in the Ember Guards world - choose from one of the guardians, repel the waves of enemies and fight adamant Bosses. Show your best strategic traits arranging defense towers, use various magic spells and save the world by returning the stolen Artifact. The increased difficulty mode is available for hardcore gamers. The game is coming to iOS, Android, Web and other platforms.

Altostratus is an upcoming game for PC, Mac, Linux, Android and IOS. Based on Nello Fontani's artworks and illustrations. Altostratus is a shoot'em up videogame currently under development, a fresh new experience for a classic game genre. Fly through different levels at the same time, above the clouds and beyond! Features: Enjoy old fashioned shooter gameplay on an innovative multi-layer 3D enviroment. Be inspired by fresh steampunk design and concepts. Find all the combinations on the power-up crafting system. Chase your enemies with the "Reverse" mode. Master the sky elements!

Blockadillo is an arcade game for Android where you smash colored blocks with a furious, color changing Armadillo! The catch: The Armadillo moves the whole time up and down by itself and you can only steer it left and right. Within the beautiful levels you will find deadly traps and lots of blocks with different abilities. Discover the remains of an ancient culture and use their old machines to cleverly solve the levels.

A recreation of Valve's huge hit game Half-Life from 1998 for your mobile devices! Game pads and bluetooth controllers supported. Game is currently in Beta form, may not represent final release.
Half-Life:Mobile uses the Unity 3D engine and no copyrighted content from the Steam game Half:Life

Graveyard March is a mobile game that mixes side-scrolling action with strategic approach by indirect control. This means you can summon hordes of monsters, but can’t tell them to turn away from an imminent death. Take the role of an undead overlord who was recently awaken from millennia of sleep and go on the amazing adventure filled with slaughters and massacres. You’ll meet a delightful bunch of zombies, skeletons, and other monsters. With them you will decimate elves and dwarves alike, and ultimately destroy mankind. 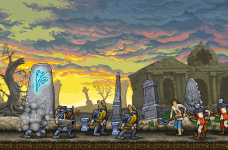 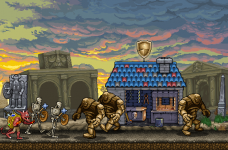 All of it will take place on ten different levels set up in the city, cave, swamp, and other, more eldritch, locations. We won’t leave you helpless there: assist your reckless troops with sorcery and lots of items. This game will take you back to the nineties in all their glory. It has a sweet pixel art style, lots of humorous allusions and difficulty level that would make a grown man cry. There is a casual mode, but we strongly advise to try hardcore.

Congratulations to all nominated upcoming apps and all the best with your future releases, don't forget to track your favorites to ensure your always kept upto date.

Wow! Thanks for voting for us! Third place is awesome! :)

Congratulations! Can't wait to play it for myself :)

HL mobile? Didn't know that something like that existed ._.
I have to check it out!

Cool list the nr 1 i did not know thanks for the info.

Thanks for supporting Graveyard March!

Thanks everyone for voting and congrats other winners!

Thank you everyone for the votes! and congratulations to all!
I wish you a great new year!