Today I will present Ibram, the angry thalasai monk out on a vengeance after losing everything dear to him.

Welcome to my series of features covering the heroes of Arelite Core. It's now on to the fourth playable character in the game, Ibram, the Thalasai monk. This article follows three others which covered other heroes who appear in Arelite Core, including Karden, Jaemon and Lleana.

Ibram was created a bit differently than the other heroes, which might explain why I had such a difficult time giving him a proper purpose. Most of my characters came from a vision, usually a personality trait I wanted to emphasize. A lot of them came from looking at heroes from other games, understanding what I didn't like about them and designing around that. Ibram was instead born out of need from a specific section of the game, the Thalasai area, to break up the pace and add another hero to the team.

The Thalasai area is a desert area which is fairly unique since it has a different style of houses and an obviously different culture from the other human locations in the game. As such, different looking characters were also created to represent that area, inspired by middle eastern looks. Near the village of Sand Thalasai, I added a monastery which had fallen into enemy hands, leading the monks to flee and take refuge. 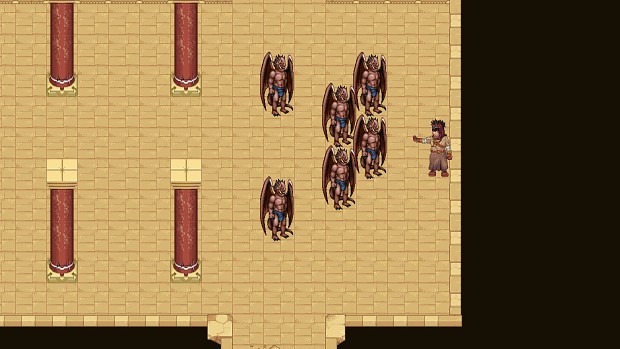 Ibram fending off a horde of grotesques

Due to dire circumstances, Ibram was forced to became the leader of these monks, who have since fallen into despair. As a leader, I wanted him to be strong, but he also needed to distinguish himself from Karden, which led to him having a wife, Surah. As Karden reaches Sand Thalasai however, Surah has died and Ibram is left to fight to reclaim the monastery on his own.

When the player encounters Ibram in game, gone is the level headed leader he was. Instead, he has became a beacon of anger, destructive and resentful of the world around him. I didn't want to make him a villain outright, but rather to present an aggressive and vengeful facet which the other heroes lacked.

The character evolved a lot throughout the development process. He started fairly tame, which in turn made him less interesting, so I added new events for him to contend with, I gave him an antagonist in the form of the dark magician Peletier, and all the while his motivations grew and it gave him a reason to stay with the team. 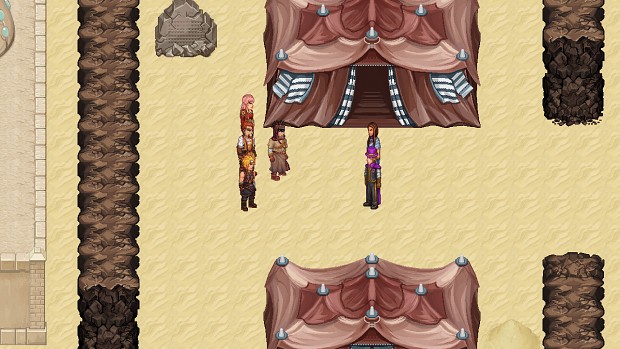 Ibram and Peletier, two rivals meeting for the first time

In fact, he is separated from the party at some point in the story and the moment when he rejoins and why was changed several times. Before it was simply circumstantial, which felt quite weak from a story-telling perspective. Now, when he joins again with Karden, it's a means to his own ends, and his own motivations. From a purposeless character, he became driven.

Ibram's name changed fairly late into development. For a long time, he was known as Yasim, but I grew tired of the name since it felt more “made up” than I wanted it to be. Since I had taken a lot of inspiration from middle eastern culture, I looked up names and came up with Ikram. That was later changed to Ibram because I kept making mistakes when I wrote it. 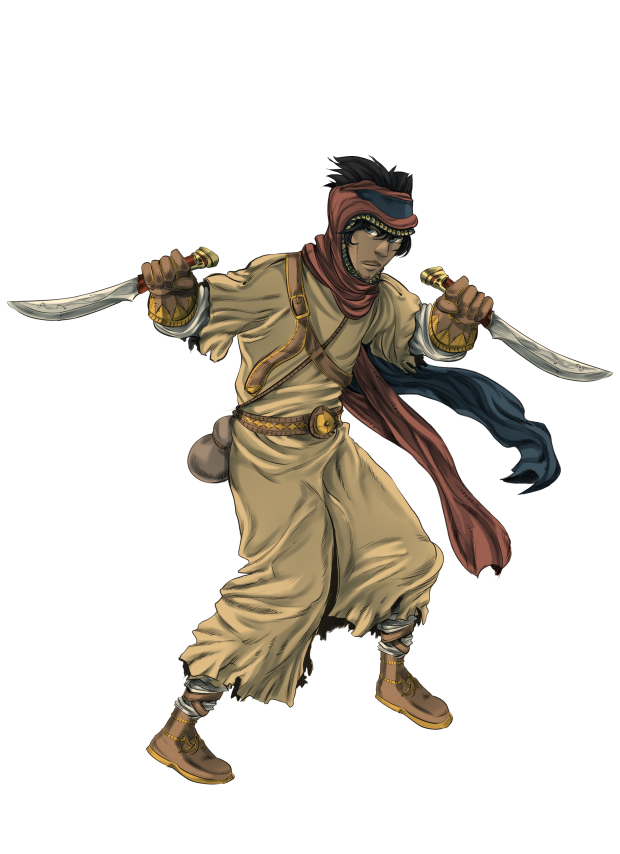 In battle, Ibram is a mix of physical fighter and offensive spell caster, with an emphasis on status effects. I wanted to convey his torment and anger through his moves, so rather than dispatching enemies quickly, he's all about restricting his foes and playing with them in part because he is brash, but also because he has little regard for his own well being, Ibram has a bit less defense and instead relies on rushing down his opponents. A lot of stance modifiers make him stronger as he receives damage, for instance, by building up blitz.

I chose twin daggers as his weapon of choice because I wanted something quick, close and personal, but I didn't want to use claws nor a sword. Daggers work because they make it possible to give him some interesting martial arts moves as he keeps mobility.

He also has limited magical abilities which at first glance could make him similar to Lleana, but where Lleana's attacks deal great damage to a lot of enemies, Ibram's magic is a bit weaker and aims to inflict “decay” and “sluggish” on his opponents. He also has the ability to go berserk, giving himself “Frenzy” and allowing him to attack the enemy harder. 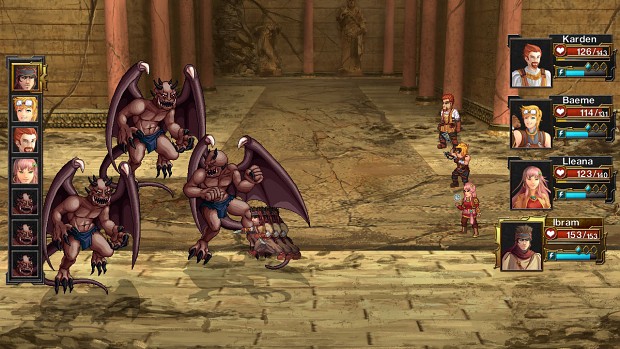 Like Lleana for the spacii, Ibram became the baseline to create the Thalasai area in general, and the monks specifically. He exists because I wanted a desert region and as I started working on that culture and the story of how they were abandoned by their king, a representative became necessary. He's definitely my least favorite character, but in turn that does mean that I spend a lot of time with him and his story arc, as I try to make it stand out equally with all of the other characters’ story arcs. I'm hoping that players will be able to connect with his anger and sense of loss, as well as the way he reacts to it.

Next week, it'll be the turn of the second non-human protagonist in the game with Aurek, the Madox shaman. Aurek is a bit of a different character, with less back story and instead acting as more of a support character for those around him. Still, a lot of time was spent making him stand out, especially when it comes to the way he fights. I hope you'll enjoy what I have in store with him.