Today Screwtape Studios officially announces Invasion!... Again. It's been a long journey and there have been at least four incarnations of this fun arcade game along the way. Here, we talk about the path we took to get there, the ups and downs and the story of how we just couldn't not finish this game (double negative intended).

My name is Anthony Wood, and I’m the Creative Director at a small game developer called Screwtape Studios.

Today, I’d like to officially announce our next game. Before I do however, I’d like to tell you a story. It’s the story of how our game came to be. It’s the story of false starts and high expectations. We lost people while we made this game, more than one in fact. They didn’t die or anything, they just left the studio, but sometimes that’s nearly as bad.

It’s not really a cautionary tale, if you’re starting out in game dev, you’ll make similar mistakes no matter what I say. Making games can be hard, especially when you are making your own, so many things can go unchecked, things that can literally have a huge impact on every aspect of your life. So anyway, here’s the story of our latest game, Invasion!

The plan was simple, spend a couple of months making a quick game so that we could learn all there was to know about making it on the app store. Conduction was a twist on the match three genre, one that certainly hadn’t been milked for all it’s worth before we got there. There we sat, a programmer and a producer with a great, original idea and the skills to pull it off.What was originally a three month cycle inexplicably turned into an eight month cycle, at the end of which I had learnt how to submit an app to the app store, kinda. We had taken nothing into account, we didn’t know what we didn’t know, and that’s the worst place to be in. Conductions first day sales were, if I recall, around 16. These were all friends and family. To date we’ve had about 400 downloads, and that’s after we made it free on Android.

Based on what we learnt from Conduction, we devised a plan that would grant us all the glory that we knew for a fact was owed to us for our tireless efforts. We asked ourselves, “What makes the big boys successful? It’s certainly not millions of dollars worth of marketing and research, or years of industry experience that included countless stumbles and canned projects. No, what makes the big boys successful is that they know how to create an IP and leverage the crap out of it”. So the answer was simple, we just needed to create an IP that millions of people will connect with in a personal and profound way, and sit back and wait for the toy manufacturers to make plush toys from our characters.If you’re still reading, you might be starting to form, or indeed have already formed, the impression that the reason we didn’t do so well is because we’re all about the money and have no souls. But, gentle reader, let me assure you that this is not the case. I personally, am one of those “Games can be art!” losers who actually thinks our medium can change the world for the good. I am also however, a realist who understands you can’t change the world without a marketing budget.

Plan Mom (or Mum for our BE audience) 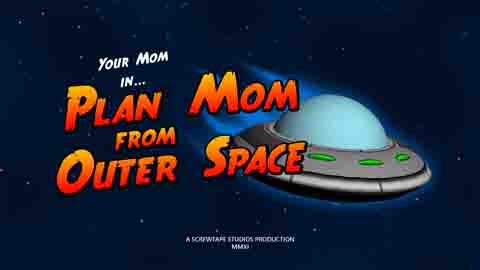 Our grand plan started with a conversation about what our amazing IP should be, it jumped all over the place and ended with a brilliant idea, there’s already an easily accessible character out there, one most of us love and have a deep connection with. Your Mum. How cool would it be if your mum was a secret agent, or a famous archeologist, or, in our case, an interstellar warrior. She’d bake by day (or indeed anything that a man would do) and then by night she’d keep us all safe from the horrors of the world. We could make literally hundreds of games featuring your mum, everyone would be playing with your mum all over the world. And so, “Your Mom In: Plan Mom From Outer Space” was born.Plan Mom was a 1950’s themed space shooter in third person, for iPhone and Android. The idea was the game would be in black and white, but as you progressed through the game it would slowly become color. It was a dual thumb stick game, and personally, I’m generally not a fan of those, the controls always seem clunky andyou end up covering half of your screen, we persisted however. The enemies came on in a classic shooter kind of way, if you’ve ever played 1942 you’ll know exactly what I’m talking about. The only difference was, it wasn’t top down, it was third person, so it ended up being more like a shooting gallery, or a batting cage. 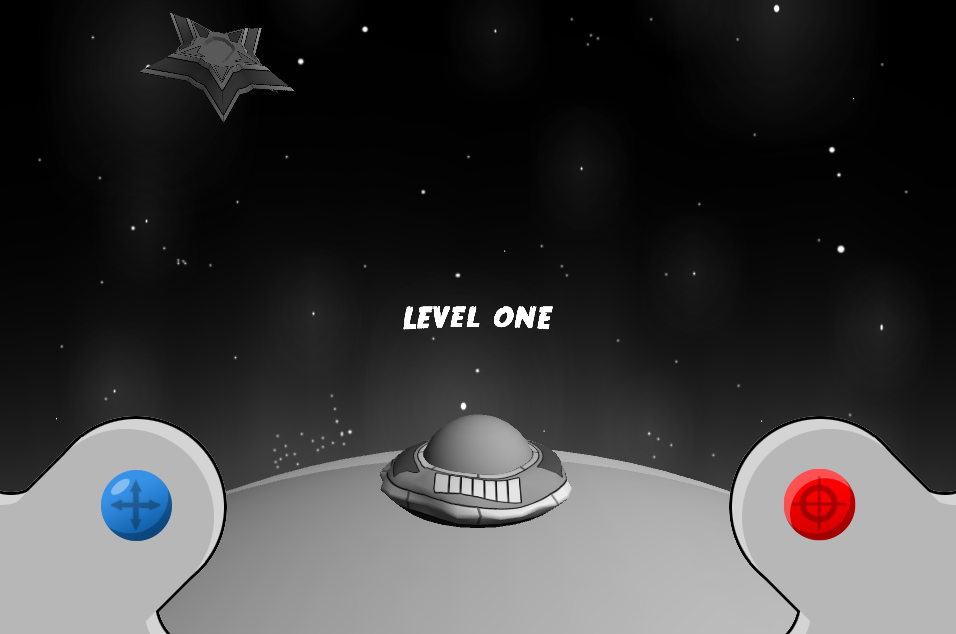 We spent a couple of weeks creating a demo that we could send to a publisher who would take a look at it, realize that we were geniuses and sign us on the spot. To our utter surprise, no one was interested in a series of games starring your mum. We wasted a lot of time on Plan Mom.

The First and Second Invasions!

We were down but not out, there was something here, we were sure of it, we just needed to work it a bit harder if we were going to see success. We though the biggest problem must have been the input. We should have gone with out instincts and not had two “analog sticks” we’ll change some stuff up and send it back to the publishers, and this time for sure they’ll be banging our doors down.We thought the third person thing was a good idea, we wanted to keep that, whatever happened, we said, it would be a third person game. So, how could we make a third person shooter without movement or fire buttons. We briefly flirted with accelerometer and a fire button, but then we thought better. What was the thing about this space shooter that was holding us back? Then we realized, it was the shooter part, “Let us not shoot things!” we said, “Let us swipe things!”. And thus, the space swiper was born.

We also ditched the mum thing, cause the joke got old, and we were adults who wanted to be taken seriously. So here’s where we landed: Two warring races, the Reds and the Greens have been fighting a long and tedious intergalactic war, once members of the same race, the Reds and the Greens were the children of a long line of evolution. They were our Morlock and Eloi. What made these aliens cool, was that instead of firing bullets, a pair of arms would come from the bottom of the ship holding a weapon, and as enemy ships approached, the player would swipe them, and we’d play a cool animation that was 1:1 with the direction of the swipe. We’d be millionaires for sure.We worked on it for a couple more months and we still had issues, the biggest problem was the third person bit, shit. So, with teary eyes, it was cut. We tried a gesture based system where you had to match a pattern, we tried crazy combos, we created a crap load of weapons that all had slightly different effects and it still felt like we were wading through the mud of mediocrity, when we should have been swimming in the clear blue waters of genius. So we, once again cut it all.We decided to follow the only rule that I remember from the second grade, KISS. We had failed to Keep It Simple Stupid and had attempted to cover up poor design decisions with more complexity. It just does not work.
We went back and just worked on the core game, took out all the crap and tried to refine it to pure fun. It’s debatable that we should probably have given up at this point, and an outsider surely would have. But we’d spent so much time making this thing that it just had to see the light of day. We embraced our inner Halfbrick and pulled out something that we thought was quite a bit of fun, and on a Tuesday afternoon in January, we showed off a trailer for “Screwtape’s next game” Invasion!.


We also sent it back to those good old publishers, you know, the ones who were going help us sell a million copies.

Most didn’t reply, which was cool, cause, you know, they get hundreds of world class games submitted to them everyday, so they need to be picky. The ones that did weren’t interested in space games, or they thought that the game looked like crap (I’m paraphrasing, they were all very professional). It was such a kick in the guts. It’s easy to get disillusioned at this point and just hate on everyone and everything for not getting it, and spit out the same old crap about men in suits not being in it for the love of it blah blah blah... but it’s more productive to sit down and look at yourself and what you want to get out of this in the first place. We were too close to Invasion! and we needed to step back. So we put a pin in it, and decided to rob a bank.

With Invasion! on the back burner, we decided to make something else, the plan was, in three to four months, to make a mobile game that we could use to make a little bit of money and get our name out there (History repeating maybe?). If people were aware of us a little, then maybe we’d have the cred to play with some bigger peeps. We came up with Bank Job and we’re really proud of what we managed to accomplish. We joked and said if we hit 10,000 downloads in the first month after release, we’d put out an update, cause it’d be worth the investment. Imagine my surprise when we passed 10,000 in the first weekend!

We’d done something right, no we just needed to figure out what!

I was ready to give up on Invasion! why go back to an old idea, we hadn’t touched it for four months and we could just move onto something new. I brought the two other key Screwtape members together one night and told them I wanted to pull the plug. Why do something that clearly no one was interested in? Those two convinced me that there was still something there, hell, we’d made all these assets, we may as well release something. I said, cool, one final dash to the finish line. I took all the assets and started again, and slowly, and surely we threw out all the junk and created what we all think is a fun little game, it’s not going to change the world, we’re not going to be rockstars anytime soon, but we’ve got something that only a couple of people will give us a one star review for. 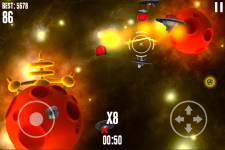 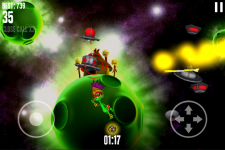