A look at the design history of Nowhere Prophet, how it started and changed into what it is today… Featuring some nice vacation pictures...

Today we’ll take a look at the design history of Nowhere Prophet, how it started and changed into what it is today…

Funnily, the game about a journey started, when I was on a journey.

I began work on Nowhere Prophet almost 20 months ago. In May 2014, just after finishing a motorcycle trip through france and italy.

I was at an emotional low and decided to spending some time on the road to just focus on myself and get myself out of the rut. And funnily enough, at some beach somewhere in France it worked. And then, after getting back I decided to delve back into a larger project. Looking at an idea, that I had been thinking about for a while now.

A few pictures from the trip

I’ve been fascinated by the idea of an abstract conflict resolution system for about a year. A system that can handle all kinds of conflict equally, anything from combat over a vehicle chase to a negotiation.

In many games the mechanics for fighting are a lot more engaging than those for conversation or other aspects of the game. Because of that picking a fight is generally a lot more entertaining than any other option. And I wanted a system where there would be no difference in fun, so that the decision between violence and debate is free from concerns of “fun”.

On example where I had seen that work well was in the very simple but extremely charming browser game Fallen London. There drinking tea with someone or breaking the nose was the same random dice roll. However I was looking for a more involved system.

To get there it first requires an abstract system, one that does not aim to actually represent what’s happening. My initial thoughts were about a timing-based gameplay. So that by timing your actions right, you could defend or attack properly, whether that’d be a punch, jumping into cover, slinging an insult or dismantling an argument.

I also knew I wanted multiple participants on both sides to provide an interesting flow and the added decision of targeting. 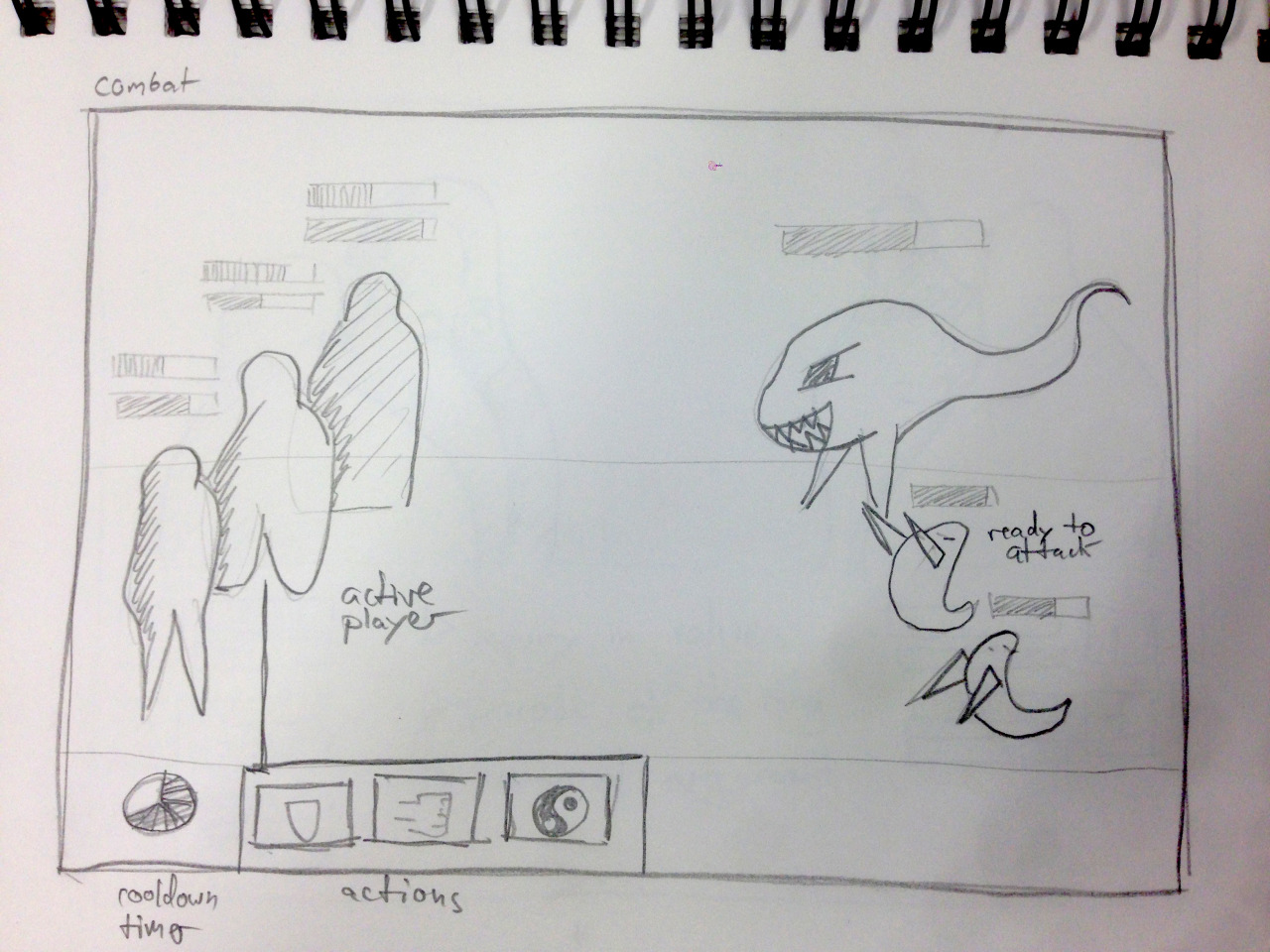 An early sketch of a possible setup

I started by scribbling some screens and interfaces and to try to imagine how the game would flow, pressing on the paper to emulate the sort of faux-timing I imagined, trying to figure out if there’s some rhythm that works.

I’ve then quickly built some really simple prototypes and while the timing gameplay, seemed to work, I noticed that it stops working once you have too many possible actions. Since you’re under a strong time pressure, thinking about which action to trigger becomes stressful. It stopped being engaging and just became overwhelming quickly.

So to condense the breath of actions down but to still provide some options I had the idea of a card metaphor. By only showing a small selection of all possible actions of a character that made deciding on the fly a lot easier. Again prototypes were built and tweaked. It worked a lot better but it was still too confusing.

The fact that you had to both pay attention to your offense and your defense at the same time was too stressful. Especially since I wanted a party on both sides, to provide interesting targeting options. So to counteract that, I’d put in two phases: Attack and Defend. That way players could focus only on one type of interaction: Playing a card or discarding a card to block an attack. 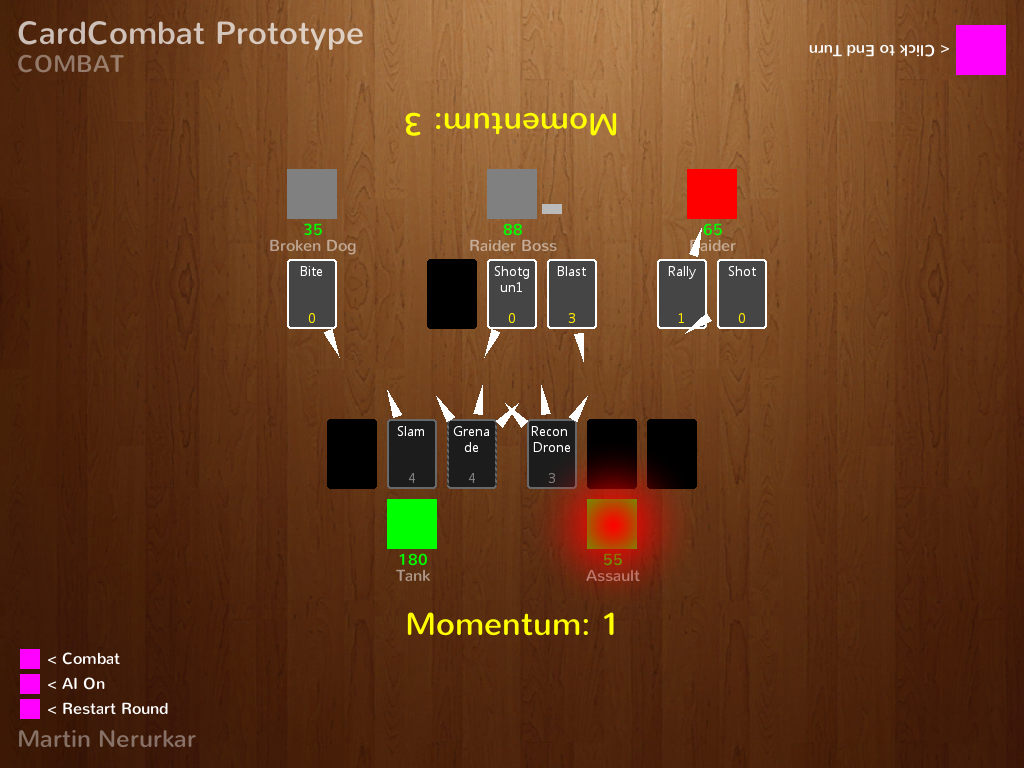 A screenshot of an early prototype

Now the game started to be fun. I realy liked the real-time mechanic during the opponent’s turn and the advanced skill that came into play when you let some attacks pass to block the strong ones that came afterwards. Yet when I tested it with a few friends I quickly noticed that it didn’t seem to work for a lot of people.

The hybrid between turn-based and real-time wasn’t intuitive. Especially since card games are generally turn-based and so I wildly diverged from the expectations of the common player.

So, what to do? I tried a few options but in the end I decided to slow down even more and go fully turn-based. As the game became slower it could in turn get more complex. More interesting cards and effects could be added without overwhelming the player and suddenly the system started to sing.

There was still a lot of details that were tweaked and improved as the game evolved. For example the Armor system was overhauled multiple times until we finally had something that was intuitive and remained fun. Also the additional actions besides playing cards went through many minor iterations until they interacted well with the rest of the game. 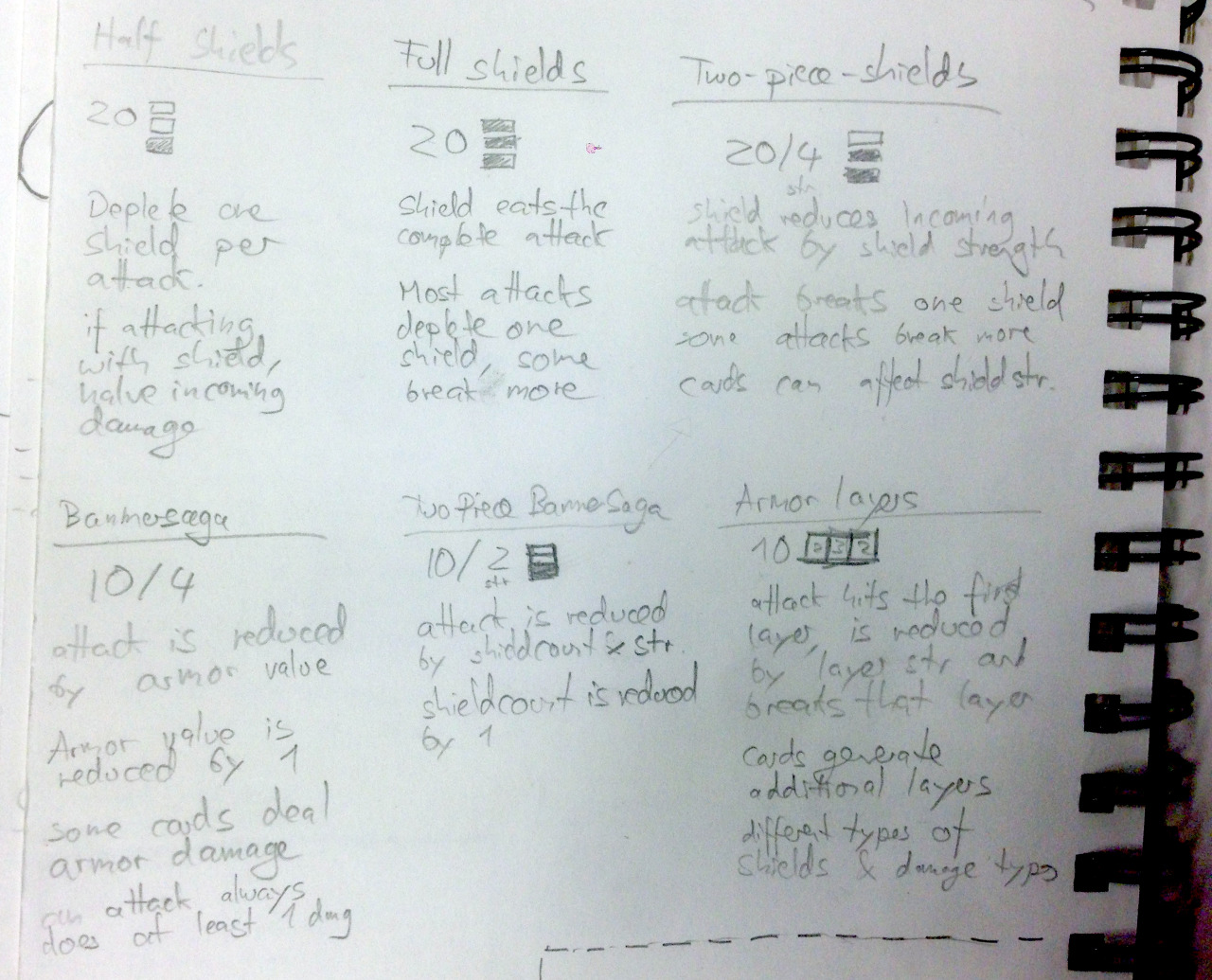 Some thoughts on possible armor systems from my notebook

As development progressed and I started to look more closely at the deck building part of the game, I noticed that with the three person party, having both a physical combat and a social conflict deck to manage was too much of a burden on the player.

Add to that the fact that we ended up with less funding than we were aiming for and we had to make choice. So with a heavy heart I decided to focus on the physical conflict and remove the social conflict from the game, even though it was the reason why I designed this system in the first place.

That just goes to show that sometimes the process of finding something new gets you somewhere, but not quote where you expect to get to. As long as you’re careful about each step, the result will be worth it. After all, we made it from a social-physical-real-time-conflict-system all the way to a turn-based-card-combat, and the game is all the better for it!

So, and that’s it from us for today. See you again next week!