In this penultimate article, I will be covering the Madox shaman Aurek. Aurek is a lot more physical, with an assortment of wrestling moves, along with the ability to speak with the dead.

Welcome to my series of features covering the heroes of Arelite Core. In this penultimate article, I will be covering the Madox shaman Aurek. If you want to learn more about the other heroes of the game, please check out the features on Karden, Baeme and Lleana and Ibram.

Aurek has a bit of a different creative history than the other heroes of the game. Unlike most of the other heroes who exist for story and pacing purposes, Aurek came about simply because I wanted a minotaur like party member. As such, he was initially conceived before there was even a story, and in time his species evolved into the Madox, and Aurek into a fighter shaman.

The Madox are very unlike most of the other species, in that they don't have a specific racial story arc attached to them, nor do they even have a specific hometown. Instead, they are found across the southern continent as members of the society ruled by the Holarii. I long debated whether or not to give them a village in the mountains, but I felt that it would feel too similar to Karden's own hometown of Arreal, which is also set in the mountains. Besides, I had no plans to have Aurek interact with his kind in a meaningful way, so I didn't need a Madox haven per se. 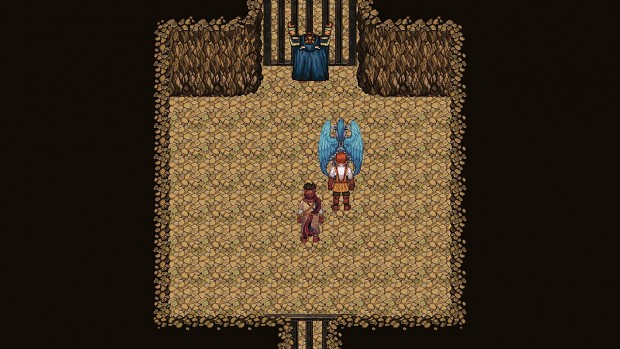 I did have a war planned between the Khane and the Madox for some time, but I didn't feel I could properly develop that facet, so I took that out as well. There's still time to give them their own unique purpose in the world, but as it stands the Madox are just another race and really I'm fine with that. They bring their own colors and culture, visual variety, without the need to emphasize them specifically.

I initially didn't have a lot to offer Aurek from a story perspective, and he probably has the shortest character arc for that reason. Rather than being someone who grows a great deal during the journey, he acts as a mentor for the crew. He's a calm character in general, observant and wise, fully dedicated to helping Karden in his journey. Because of Aurek's abilities as a shaman, he knows more about the villain, Talameq than most. He has the ability to communicate with the dead, a skill which has it’s full purpose come into play as the story moves forward. 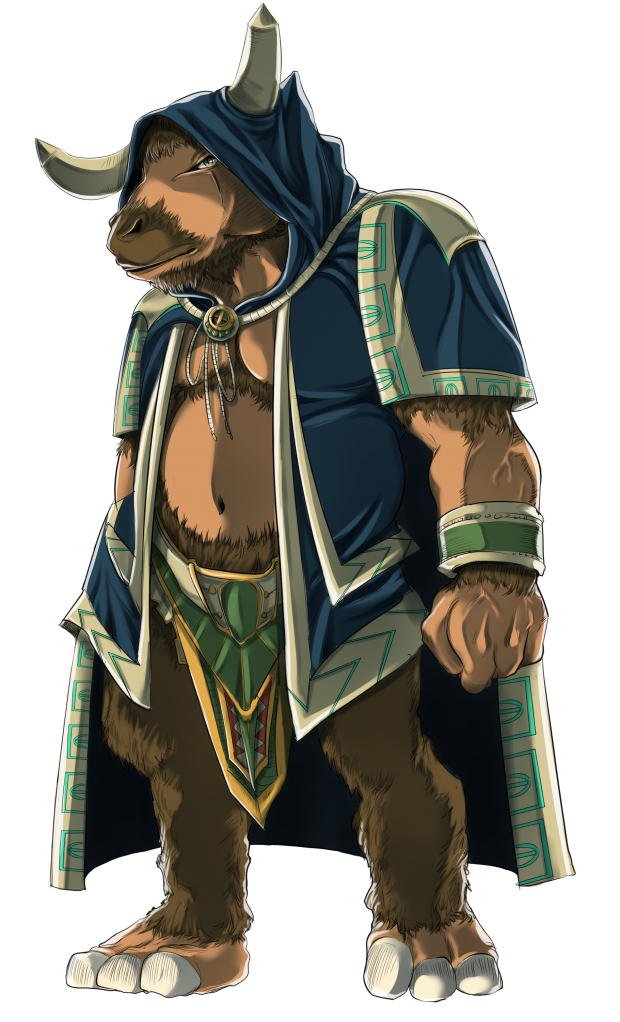 Though Aurek doesn't have as deep a storyline as some of the other heroes, one place he does shine is in combat. Thanks to his Madox heritage, the fighter shaman is very strong, and his shaman abilities gives him access to attack and healing spells. I decided not to give him any weapons, so instead he fights with his bare fists, which in evolved to giving him wrestling moves such as a drop kick. Aurek also has some very visually unique blitz moves such as his piledriver attack where he lifts a monster into the air and slams him into the ground. That attack was inspired directly by Sabin's suplex in Final Fantasy VI and was added after watching a speedrun of the game. 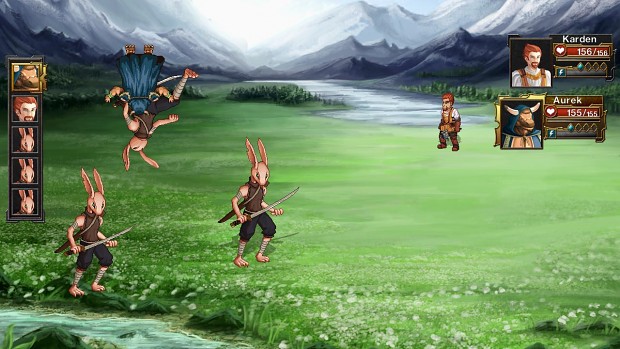 Piledriving a ninja rabbit from the sky

Aurek also has the ability to summon monsters to attack the opponent. The move doesn't actually change gameplay, as summoned monsters do not remain in play for instance, but I feel like those are the kinds of touches which add variety to the game and keeps the player's interest high. When making a 2D JRPG battle system, it's easy to get lost in systems and numbers, and Arelite Core certainly has it's list of systems once in combat (combos, stun, blitz, etc.), but it's also important to consider how attacks are performed. Sword strikes, fireball, shower of meteors, the genre has an endless list of tropes, and providing attacks which are a bit out of the ordinary, it adds personality to the character.

In the end, that's what Aurek's role in the game became, not simply to follow his path in the story and in battles, but as a baseline of what I want other characters to be and to do, especially in battle. After I designed and implemented the piledriver, I felt that other characters needed to stand out more as well. A few characters saw their blitz moves evolve to look more fancy and I'm still on the lookout for whatever I can do to make every hero more interesting. 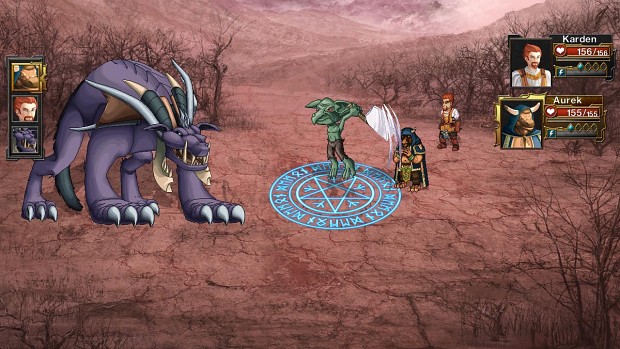 Aurek summoning a goblin against a Tyran

Though he didn't originally start that way, Aurek eventually grew as a melting pot of stuff I enjoyed from Final Fantasy. He has Sabin's suplex, he can summon monsters, and his skills in battle are unparalleled. He might not have the most in depth story arc, but that's fine because Aurek isn't about taking center stage. Instead, he supports those around him and acts like a father figure. Rather than learning about threats, he already knows them and can inform other characters, as well as the player, when needs arise. And besides, he's a minotaur shaman with wrestling moves, that in itself should be enough to pique player's interests.

Next week we come to the conclusion of articles on the heroes of Arelite Core with Pharj, the Holarii captain. Pharj is probably the character closest to Karden; A more heroic character but she also has her own perspective on the unfolding events due to her Holarii heritage. I hope to see you then.