Post feature RSS The Many Moods of the Target Reticle

I tried putting as much useful information into the target reticle as possible. Here's how it all works.

No, that's not the symbol of some far-right organization, it's the target reticle/cursor in Patent Blaster. I've tried to put as much useful information into it as possible. Here's what it tells you: 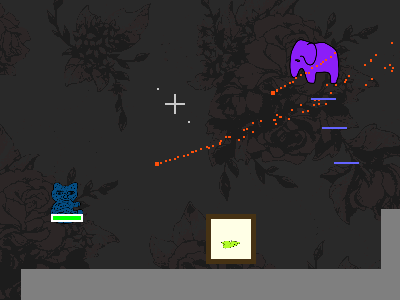 The reticle itself displays two things: is your weapon ready to fire, and is the point you're aiming at in range? The former is indicated by color: a grey reticle means the weapon's ready, while a red one means you're still reloading.

The latter is indicated by shape: if the center is missing, the point you're aiming at is out of range.

Finally, the reticle is flanked by what I call the "targeting sundogs". These show the inaccuracy of your current weapon: how far to the left or to the right the shot might come out.

Patent Blaster's randomized weapons have a central quality measure that's tied to their power level, which means that more accurate weapons tend to be less powerful. Still, it can be faster to land three shots than repeatedly miss with one powerful attack.