Check out our feature introducing the Director of our picture and how he'll make the player's life difficult when he gets bored. And what the heck is a MacGuffin anyway?

Posted by Hard-BoiledSoftware on Sep 8th, 2015

The Director and The MacGuffin

Hello again! Lead designer Dwayne Douglass here again and this time I’d like to introduce you to the Director of Killing, My Friend. He’s known simply as… the Director. Think John Ford mixed with Akira Kurosawa with a large helping of Cecil B. DeMille and more than a dash of Warner Herzog. He’s a perfectionist who doesn’t care about the wellbeing of his actors. He just wants that perfect take. That perfect shot. And he’ll go over-the-top and over budget to get it. To do this, the Director plays the part of the game’s announcer, the AI director and pretty much the main villain. All at the same time.

The Director as Game Announcer:

The Director is played by the very talented and very funny Jeremy Carter of the Superego podcast: www.gosuperego.com If you haven’t had the pleasure of listening to one of the funniest improv podcasts out there, then treat yourself to some very funny and very NSFW audio. We’re grateful to have such a talent working with us on Killing, My Friend.

The Director’s job is to let you know what’s going on, where it takes place, and what the back story to your scene is. He’ll comment on how you are doing, and he will definitely let you know how he feels about your performance, good or bad. He's both the announcer and your enemy in Killing, My Friend.

Here are a couple of samples:

The Director as AI Director:

When the Director gets bored because the players are doing too well he’ll up the ante and make it the game more difficult. If he is disgusted with how poorly you are doing he’ll make it easier by firing some of the extras he’d planned to use as cannon fodder. And likely insult you for it too. To make the game more difficult he can throw more bad guys, make the bad guys he throws at you harder, throw a big, bad boss into the game, or perhaps improvise new plots aka MacGuffins on the fly.

(Lead designer note: a MacGuffin, in fiction, is a plot device in the form of some goal, desired object, or other motivator that the protagonist pursues, often with little or no narrative explanation. Think the ark in Raiders, or the Maltese Falcon from the film of the same name. The specific nature of a MacGuffin is typically unimportant to the overall plot. What better way for an egomaniacal director to improvise than to throw a new MacGuffin at you?) 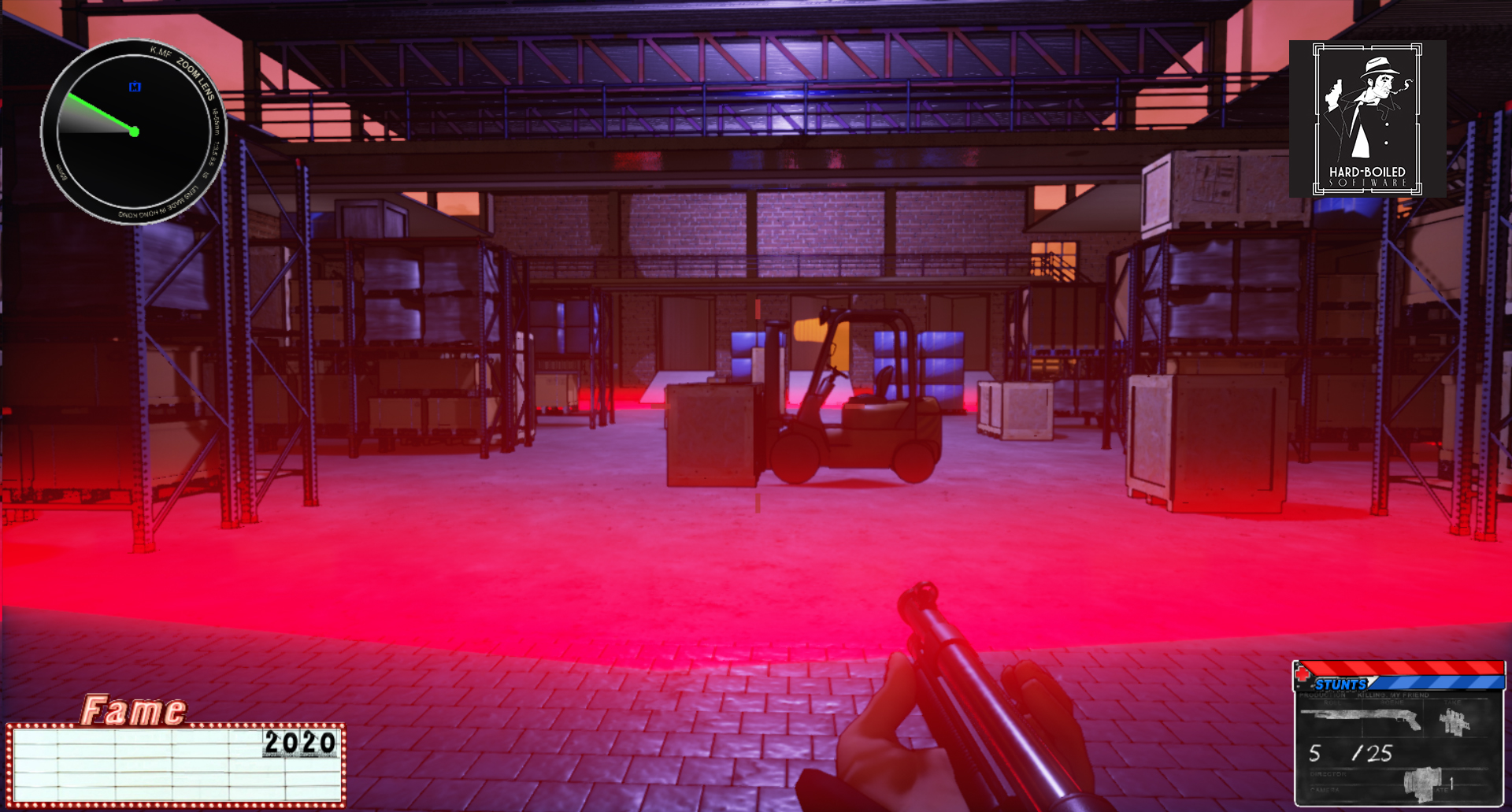 In Killing, My Friend MacGuffins are gameplay goals that the players have to complete before moving to the next take. They can take many different forms in Killing, My Friend. And due to the nature of the MacGuffin, plot point can be a thing, usually themed for the particular map. A briefcase of money. Or drugs. A birdcage full of black market weapons. Perhaps it’s a Western themed map where everyone is a cowboy and the MacGuffin is a treasure chest full of Spanish Doubloons! It really can be anything you can imagine. (What was in that briefcase in Pulp Fiction anyway…?) At any rate, the MacGuffin itself is less important than what the Director wants you to do with it.

Most MacGuffins can be played with 1-4 players but there are a few that only work if there are more than one player and so are only available when playing Killing, My Friend cooperatively as noted below:

Assassination: Take out four targeted Henchmen or Arch-Nemesis in sequence within a time limit. Time is extended after each kill. After all four targets are killed, the players must wipe out the rest of the enemies until the Take is complete.

Secure the MacGuffin: The players must capture and hold four specific points around the map in sequence within a time limit. The more players that are near the capture point the faster the point is captured. After each capture, time is extended. Co-Op only.

Find the MacGuffin: The players must search a specific area of the map for a specified amount of time. The more players that are near the point the faster the MacGuffin is found. 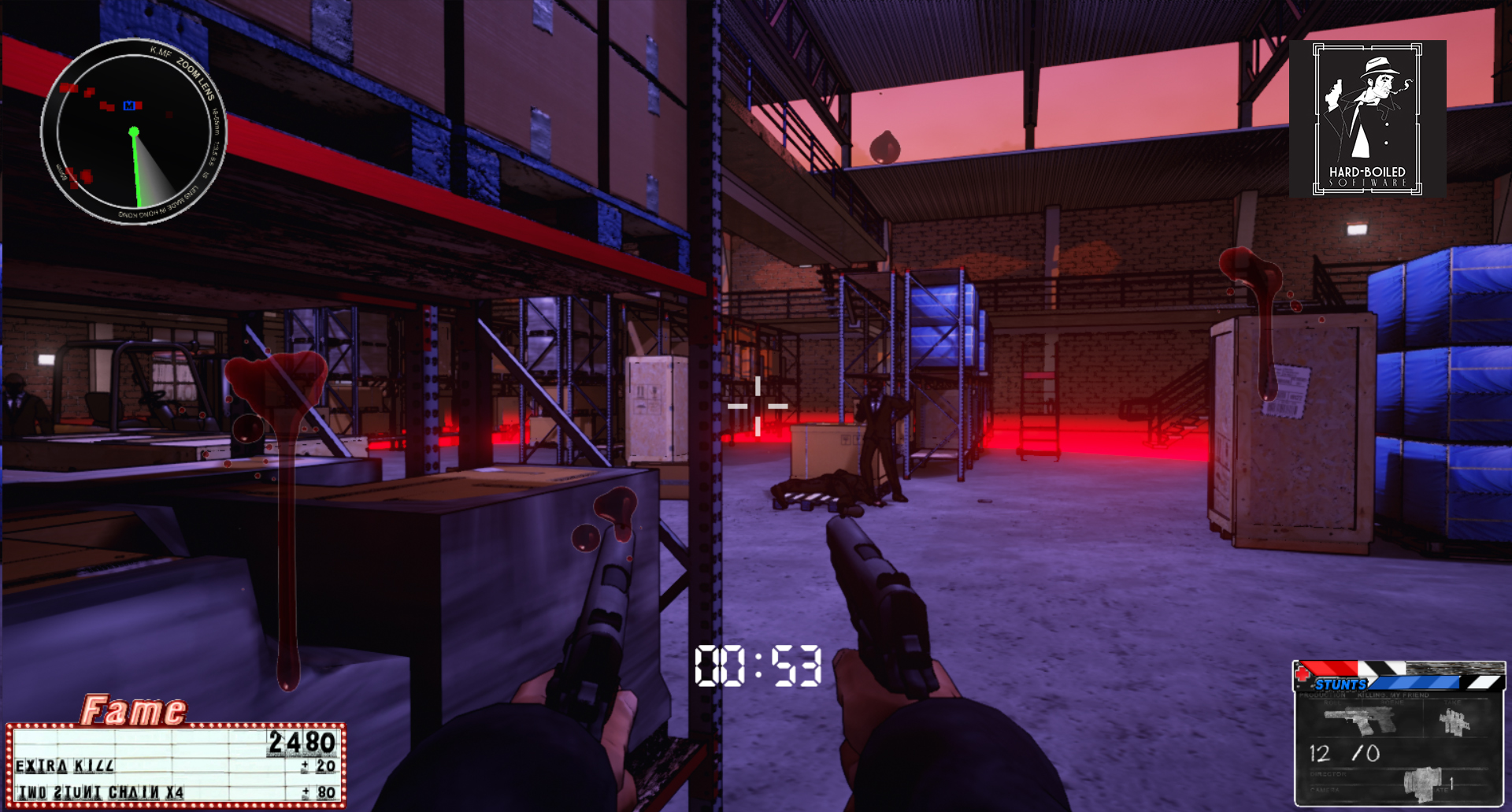 Deliver the MacGuffin: A reverse of Grab the MacGuffin, but the MacGuffin must be delivered to a point on the map - a well guarded location with a particularly difficult enemy to fight. Think of it as delivering drugs or planting a bomb.

As you can see, the director has quite a few tools to keep the players on their toes. And many of them are designed to foster cooperation between you and your teammates. To complete a game of Killing, My Friend the players have to survive 10 “Takes” (waves of bad guys) and escape. Which will be hard enough as it is, but with the Director calling the shots every game will be different, even on the same map. And no two games will play the same.

I hope you enjoyed our preview of the Director and the MacGuffin goal system. Keep an eye out for another feature coming soon where we’ll cover the Bad Guys you'll be facing and some Co-Op elements of Killing, My Friend.