Some thoughts on the symbolism and psychology that went into the game.

Posted by TwistedJenius on Mar 8th, 2013

I really like villains and particularly villainous protagonists. This idea was central to the creation of Twisty's Asylum Escapades. One of mankind's oldest basic types of stories is that of a hero going down into a dark place to face a monster. Going at least as far back as Beowulf, these kinds of tales have been a staple of storytelling throughout human history.

Even some of the first, popular video games have utilized this basic premise; games like Super Mario Bros. and The Legend of Zelda. It's the idea of a hero having to go down into a dungeon and face a monster or a threat. In fact, it's likely because of this familiar trope, that the word "dungeon" has become a common gaming term.

I consider Twisty's Asylum Escapades to be an inversion of this classic premise. Instead of playing as a hero going down into a dark place; you're the monster coming up out of it. In this game the player is forced to essentially empathize with a villainous character and the game leaves no real question as to who the bad guy is. Twisty is a true monster in every sense of the word and I imagine that this fact might cause some moral confusion on the part of some players. 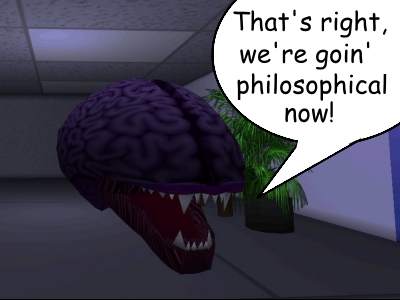 Moral decisions are nothing new in video games, but in this game there is no such decision. You play as the monster or you don't play. This isn't a game where a human is going around killing monsters, or even other "evil" humans. This is a game where a monster is basically mauling hospital staff which are trying to more or less do their jobs by keeping him contained; supposedly for the good of society at large.

I'm sure that different gamers will handle this situation differently and some may jump into the part enthusiastically, while others may be completely repulsed by it. It should be noted that some effort was made to make this premise more palatable to more people by doing things like designing the characters to be cartoonier and in some cases giving them oversized weapons to make them look more threatening to the player.

One thing that we can learn from games like this is that morality is ultimately subjective. Humans seem to have a natural tendency to assume that they are in the right and history has shown that we have an almost limitless capacity to justify anything. No matter what we're doing we always assume that we're the good guys. And if we happen to find ourselves playing a game where we're represented by an avatar that is a floating murderous brain, then I'm sure that there are plenty of us who are willing to go with it.

Video games are a unique medium in that the audience member (the player) can be even more psychologically connected with the main character than in any other type of non interactive medium. It's been observed by many great storytellers that villains are often the most important and interesting characters in fiction. I think that more games should allow the player to experience the thrill of being a blatant bad guy.