A closer look at the gameplay mechanics governing spellcasting and the spell school system in Cosmonator, with some examples!

So, yes, it's a spaceship, and yes, it can cast spells. Let's just get that out of the way again. Cosmonator is a shoot-em-up with all the upgrade/character progression trimmings of an RPG, including many of the upgrades and spells that you'd normally expect. It doesn't make that much sense really, but it's fun and interesting, and that's what's important.

(The 'Fire Spirit' spell, which creates a fiery entity that destroys enemies with rotating orbs of flame)

Of course, players can choose to play without buying or using any spells: simply build a passive 'warrior' type character with passive only upgrades (firepower, missiles, drone, armor, shield, etc, etc). This is a totally viable way of approaching the game, and there are still a ton of diverse passive upgrades, so it won't be boring. (Also it's much less labour intensive, so surely there'll be many players who prefer such a simple style of playing - you just hold down the fire button, like in old school arcade games.)

But in our opinion Cosmonator is much more exciting if at least a few spells are included, as this really opens up a sandbox of different playstyles, and it allows players to react in clever ways to specific situations that the game throws at them. (Basic example: a spell that is useful against a bunch of weak enemies, like Shockwave for instance, might be quite useless against a single strong opponent - so you have to think strategically when choosing your arsenal of spells, and when casting them in battle!) So while using spells will not necessarily make you more overpowered than not using them, the game was designed for spellcasters to be able to deal with a wider range of challenging situations IF they use their spells cleverly. This works both ways: a spellcaster who simply chooses spells at random and doesn't think about how they use their spells, will have a massive disadvantage.

Spells are divided into Attack and Support spells. The Force Field spell (left), one of the game's most powerful support spells, creates an impenetrable barrier that deflects enemy bullets. EMP Bomb (right) does large area-of-effect damage, and disables enemies' weapons systems for a while

Because we wanted to try create a more complex play experience than what most classic / arcade shmups have been offering, we spent a lot of time making a wide variety of different spells - spells that work together in different ways; spells that attack or defend; spells that do both; spells that make you more powerful; spells that are super tactical; spells that are completely useless for certain builds but totally awesome for others. Even more complexity is added by the gem augment system, which allows players to use gems - a rare, special currency found in some levels and after defeating bosses - in order to augment spells, so that the nature of the spell changes altogether. Gems can also be used to buy special feats later on in the game, some of which boost your spellcasting ability in unique ways: meditation, for instance, allows you to replenish spellcasting energy at twice the normal rate while you are not shooting - ideal for a mage type build that has low firepower anyway.

(we are working on some new ones!)

Then there is the spell school system, just to add some more depth, in case there was not enough already! Spells belong to different magic schools (e.g. Fire, Time, Spirit, Poison, Energy, etc), and advanced players (once you reach a higher rank) can become masters of those schools by purchasing the relevant Master Upgrades. Once you master a school of magic, all your spells that belong to that school of magic become more powerful, and you unlock some special spells that are not available otherwise. For instance, a Time Master will become more powerful in the Flash, Time Slow, and Time Sphere spells (all of which manipulate the flow of time around you, allowing you to slow and freeze bullets, enemies, etc) and will additionally unlock the super powerful Time Warp spell, which slows down everything around you slightly for a long period of time, making dodging and precise aiming easier. 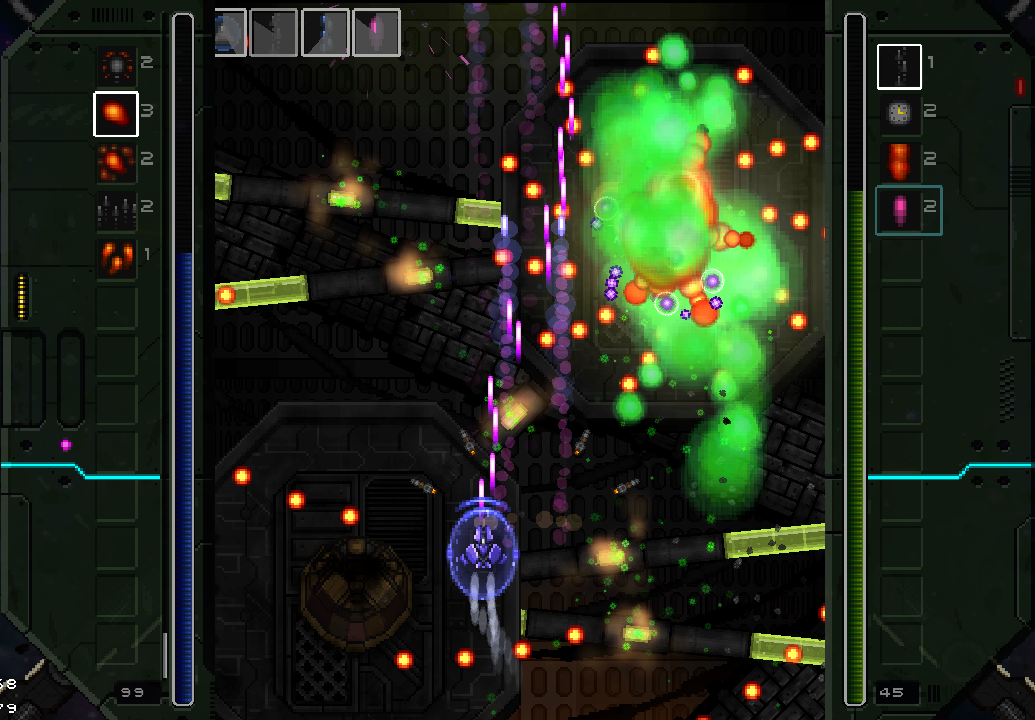 Because all of this can become pretty complex, and because the complexity can be either confusing or useful depending on how much you know about the spells that you're using, it was crucial to us to achieve a high degree of transparency regarding the spells and their gameplay mechanics. So we tried to make as much information as possible available to players: in the Spell Shop screens, you can select your spells and check out in detail exactly how much damage they do, how long their duration is, in what ways they improve you (and by how much), and how they work in whatever other ways, depending on the spell in question. Since spells can both be upgraded to higher levels with cash as well as augmented with special gems, this information can be crucial if you are deciding whether or not to upgrade a spell to a high level or whether you want to spend that gem or not. 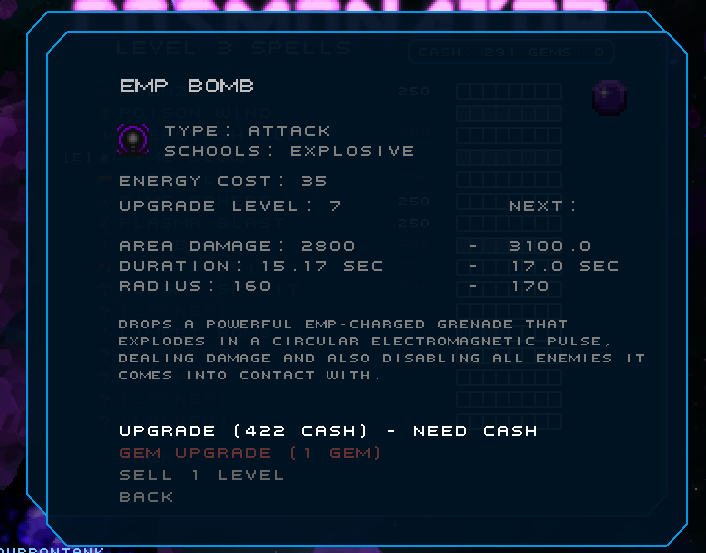 Above: The spell detail info screen of the EMP Bomb spell. The spell has many different features that are all documented here: the damage it does to its area of effect, the actual size of that area of effect ('radius'), and the duration of the EMP stun that will be applied to its targets. On the right hand side of the info screen (under 'next') you can see by how much each of these variables will be increased if you upgrade the spell by one additional level.

(Above: Once you become more comfortable with juggling more than one or two spells, spellcasting can become increasingly complex! Here the player has cast two Mystic Ball spells, creating those two purple defensive orbs; they then follow up with a multicast Firebolt from behind the cover of the Mystic Balls.)

Here is an old (beta gameplay) but pretty cool gameplay video that showcases a 'true mage' type build, which relies on 0 firepower and only casts spells in order to survive. It's a really technical build - definitely not for Cosmonator first timers - but quite powerful if you know what's going on, and if you can keep focusing on what spells to use at what times!