After many months of studying and researching old scriptures from different sources, both official and fan-made, we have created a compendium of Etherian lore. Warlords and warladies, today we would like to present the knowledge we gained about the Undead race. 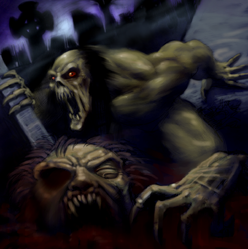 A result of The Sundering, the undead are soulless, emotionless puppets who serve only the bidding of their master. A form of daemon in their own right, the undead linger and haunt ancient ruins or battlefields, never resting until their task is complete, which is usually to return the living to dust. Some come into being through dark magic known as necromancy, whilst others manage to return through some unseen power in order to seek retribution for their short lives.

As soon as the daemonic god of death stepped into Etheria, his power seeped throughout the world, cursing the mortal and immortal alike with the profanity of living death. Born of the coldest, darkest thoughts of the daemon-mother Balora, death was given form and henceforth took the name Bane. New and dark magic awoke at his arrival, and since that moment, all grew to fear the name of death, which is spoken only by those few maddened fools who desire power at any cost or who wish for the end of all things. Those who think that they can gain and manipulate the dark god’s power for their own selfish use do not realise that, ultimately, they are manipulated and used themselves. Those who befriend and employ the dead pay a horrible price.

However, unknown to Bane, there are a few who know undeath who have not succumbed to his powers or who have escaped them through divine aid. Humans, elves, dwarves and all of the living have, in the past, united against and defeated Bane with the help of the Pantheon, showing that even the dark god is not infallible. Regardless, death is a part of all living things. Even the gods themselves greatly fear the cold, dark embrace of oblivion. The power of Bane and his undead children is so profound that, if left unchecked, the world would wither and die.

All fear his name!