After many months of studying and researching old scriptures from different sources, both official and fan-made, we have created a compendium of Etherian lore. Warlords and warladies, today we would like to present the knowledge we gained about the Fey race. 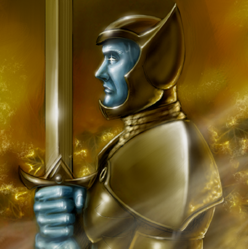 Most know the immortal faeries only in folk tales told from parent to child. They are the origin of many legends, regardless of which race the storyteller is. All have their own names for the mysterious faerie folk, though most commonly they are known as the fey. So inconspicuous are they that some do not believe in their existence at all. Since the new age, fey have had to rely on illusions and trickery to conserve and protect their own peoples. Those few who ever manage to meet with such a creature will observe their comparatively minute and frail figure and their clear ties with the supernatural. Some are frivolous and jovial while others bear only hatred and malice towards almost all other races, due to countless events in Etherian history. This can make them appear to be introverted, selfish and xenophobic isolationists among even their own folk.

The dawn of their people is a tale almost none know. Long ago, before Etheria even existed, a battle between gods was waged in the future realm of the pantheon - a battle not of good and evil, but of truth and denial. Within, all things sprang from the transcendent mud called the Primordia. Some came to be through design by the will of the gods, while others rose from the mud’s surface from stray energies and thoughts. During their battle over creation and existence, the Primordia became particularly disturbed. It was at this time that horrors and otherworldly beings of tremendous power rose from the mud’s surface and scattered into the infinite cosmos. Some bided their time, slowly gaining power in the hopes to influence creation. Others, however, had power enough to make a part of creation their own. One such being was the Fey Queen, Tylanen.

Born from the battle of gods, she slipped away, awaiting a chance that she may influence creation. Eons passed - moments in the lifetime of a god - while Tylanen shrouded herself until the creation of the world of Etheria resounded across the cosmos - felt by every manner of supernatural aberration. It was at this point that she used her incredible powers to create a dimensional gate to Etheria and to populate the world with her own progeny. Claiming the world as her own, her people spread across much of Etheria, growing in power and prosperity. This age was known as the Age of Twilight, but it was not to last. Other beings of immense power had also taken advantage of the world’s creation.

Great flying lizards with scales of steel and magical breath made their home in the east, where the world was still being forged by giants of Emrik. The dragons’ presence was hated by the Fey Queen, who believed all the world belonged to her. In her arrogance, she sent a messenger to the dragonfathers - the most powerful of all dragons, requesting they either leave the world or be subjugated by her people. To a dragon, there was no greater insult; in their fury, the messenger was incinerated, and the Dragonwars began. Each side decimated the other, using powers equal to that of gods to rip open the land, raise mountains and tear the atmosphere to shreds. Such an event wouldn’t happen again until the Sundering, when the world would shake once more. The fey and dragons fought until much of their people were no more, each side equally decimated. Their powers now diminished, each side hid themselves as the gods of Etheria came to repair the world and usher in a new age.

No longer are the fey so powerful. Where once their civilization spread across the entire world, now they are forced into hiding within their pearlstone, crystal castles in the Twilight Woods. As new, dangerous races were created, the fey have had to give up almost all of their domain. Though their existence is now treated as nothing more than a source of entertainment on the other side of the world, the truth of the fey is incredibly dire. To the north in Maran, goblins and dark dwarves sow destruction for the profit and technological progress of their people. To the east on the Twilight Isle, the sacred magical convergence point of Vivellius Madra has been disrupted by primitive barbarian invaders, throwing chaotic energies across the island. To the south on the Daran Plains, merchantmen of Diraq, Selentia, Thalassia and Goldor deal with one another in a lucrative business, obtaining fey artifacts and slaves. To the west at Windstone Pass and the Mouth of the Worm, the daemonic scartauri consume and devour everything in their path.

On all sides, the fey are met with powerful enemies held back only by the waning power of a bygone age and their sole-friendship with elf-kind. Worse still, ancient rivals from other dimensions pour into Etheria, and the mighty dragons are steadily returning, putting even greater pressure on the already-strained resistance of the faerie folk. No matter the odds, the fey are determined to persevere and regain what they once lost. Violation of the sacred land of the fey is unequivocally met with a cold and terrible wrath.

A very interesting read and quite an intriguing creation myth. One really gets the feeling that Etheria is an ancient world with rich and complex history.

It is funny that they are presented as a rare and dying race, when their whole playstyle is about numbers and speed.