After many months of studying and researching old scriptures from different sources, both official and fan-made, we have created a compendium of Etherian lore. Warlords and warladies, today we would like to present the knowledge we gained about the Empire race. 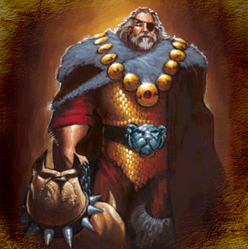 Much like the Agarian Knights, many human empires once derived from Aryan barbarians who migrated from the south-east of Etheria in 730. Imperial humans have both taken part in preservation and destruction, respect and manipulation, good and evil. Some are deeply religious, whilst others believe only in the might of the Emperor. Imperial governments are constantly in flux as individuals vie for the power to enact their own ideals. As such, many races are very wary of imperials, for they deem them fickle and untrustworthy. Over the passage of time, the empires have both prospered and fallen, but human tenacity has always prevailed no matter how difficult the obstacle.

Most imperial humans hail from the remnants of the old Lysean Empire, which was one of the biggest powers of Etheria before their unpredictable nature and disregard for life or their environment brought them to the brink of annihilation. A corrupted emperor sought for his own gain and foolishly provoked the orcs of Kor by stealing a spiritual artifact. This eventually led to the destruction of Lysea in 2332. Much of imperial history is filled with glorious conquest, governmental diplomacy and riots, which continues to this day. The ruthless history and propaganda of the old Lysean Empire has warped much of its population into either the belief that their emperor was chosen by the Pantheon, and as such is a divine figure, or that the emperor himself is placed above the gods, and to him all other lives and races are irrelevant.

Dark elves of Doomwood took great part in the founding of the Lysean and Selentine Empires. Their corruption seeped through the lands, inciting countless rebellions and ultimately leading to control of the two empires from the shadows. Even though their interest in Lysea has waned, they yet partake in the affairs of one of the biggest and most powerful empires that yet remains – the Selentine Empire. Formed from the K'Selen and remnants of Lysea, Selentia was created by the half-daemon empress Selentia herself. In time, the daemon-worshipping K'Selen's ideals diverged and the empress was dethroned. To the public, Selentia is a profitable and respectable empire. The reality, however, is that the daemon-worshipping underworld organisation known as The Dark Path still controls much of the empire.

For most imperials, the curse of their bloody past continues to haunt and linger over them like a formless shadow. But not all imperials are haunted by their past. Some have grown to yearn for nothing but peace, to explore and learn in the world they live in. Many such imperials have emigrated from their old war-torn lands to seek new lands overseas. This movement became stronger after the destruction of the Lysean Empire and has led to the founding of new colonies, including parts of the Diraqine Empire. Despite this, many imperials are still driven by thoughtless greed and have sailed overseas to claim land and its treasures using the name of the emperor, believing their actions to be nothing less than divine mandate.