After many months of studying and researching old scriptures from different sources, both official and fan-made, we have created a compendium of Etherian lore. Warlords and warladies, today we would like to present the knowledge we gained about the Dark Elf race. 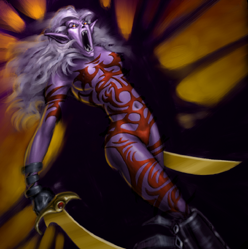 Exiled from their ancestral homelands for almost three millennia, dark elves are twisted creatures who desire nothing more than to control Etheria from the shadows by any means necessary. They share a similar grace and beauty with their kindred, but all else, especially their minds, is tainted by malicious hate, grief and the whispers of daemons. Dark elves value secrecy above almost anything else and as such are shrouded in mystery, along with their myriad and intricate plots.

One truth that all are aware of is that a dark elf's presence almost never means well. Often they would betray each other just for the brief taste of power before they themselves are inevitably betrayed. Due to their nature, dark elves have few they can call friends or allies and many of these observe the corrupted elves with utmost scrutiny for fear of finding a venomous blade protruding from their chest.

In the early days of the high elven calendar by which all things are measured, there was internal conflict within the government, the population and even the immortal White Council itself. Prince Mordaine, grandson of Queen Ehlanna II, supported the research of dangerous magic, reasoning that Gornak Elfeater's merciless assault and any future attacks like it would be unstoppable without new magic. Against those principals stood Prince Inarion, grandson of King Keldurin and Queen Ehlanna II. The political power of the two elven nations, Ehlariel and Lunariel, were swayed in Inarion and Ehlanna II 's favour and in time Inarion was named the next Moon King.

In disgust, Mordaine fled to discover more of the forbidden magic. Within five years of magical experimentation, Mordaine learned of the true nature of Etheria. The prince had to make sure, for the future of Etheria, that his magic would be used against the hidden enemy. When Mordaine returned to Lunariel, he appeared to have changed ever so slightly. The prince's truth served only to divide the elves even further, spreading bitterness and resentment in the normally infallible hearts of the elder race. A terrible anxiety manipulated their thoughts and actions and during the strife, and soon Queen Ehlanna II was found dead. Out of fear, the White Council reacted to the foul act of a single elf by exiling Mordaine and his followers, decreeing that their beliefs were nothing but heresy against the government.

Believing that the future of Etheria rested on his shoulders, Prince Mordaine prepared a spell the likes of which Etheria would never see again on the island now known as the Sundered Isle. With every syllable, the island hummed and crackled with raw magical power. The tides of magical energy from all over Etheria was collected at one point. With the last word, the power was released. Etheria itself was shaken and torn apart under the immense magical stress. The tides grew into tsunamis and washed away whole civilizations. Through the gateway Mordaine created, four beings strode. Despite the prince's incredible magical power, he fell to the floor, completely helpless. His eyes met the creatures', and he instantly knew the mistake he made. Before them, he was nothing. As the beings moved past him, he screamed as his body twisted and writhed in intense agony. His skin became a sickly, pale green. Maggots writhed within his flesh, illnesses which were beyond imagination ripped away at his very being. Coughing and spluttering, blood poured out of Mordaine as he shrieked his throat raw and clutched at his head. The prince collapsed into a pool of his own decay, his body aging and withering away every second. The sweet embrace of death never came. One of the beings, a vile and ominous creature born of purest hatred, picked Mordaine's body up by the skull, and cast its gaze into his mutilated eye sockets. Just when Mordaine thought he may be released, a blue fire burst out of his eye sockets and travelled up the dark creature's skeletal arm and into its own skull. What was left of the prince's body finally became limp and lifeless, and the creature threw it onto the ground, shattering it into dozens of fragments. The price Mordaine paid was almost unthinkable. For all eternity, he was cursed to forever remain in agony as he sees the world through the eyes of death.

Unholy waves of sundered magic blasted across Etheria, giving birth to new, terrible magics and creatures. At that moment, the exiled elves cried in unison as elements of death, pestilence, war and famine tortured their minds and warped their bodies. From then on, the exiles were known as dark elves, who knew only of emptiness and loneliness. The Sundering had more effect than even the elves knew, for another alien being once cloaked in obscurity and hidden from the eyes of the Pantheon revealed itself to a chosen few. Speaking lies and false promises, it claimed all dark elves as its own and gifted them with its demonic children. Now, with the power from another universe, the dark elves seek revenge on their brethren, to control Etheria and ultimately to present it as a gift to their new extra-planar goddess, Aranea.

What about Kargoth? I though he was the main deity of the Dark Elves, and their Titan.

There isn't much info, but according to WBC wiki, he is a transformed elf chosen to be Aranea's mate. Aranea then devours him and chooses his replacement. This is, however, not canon. No idea if it's canon for The Protectors.