After many months of studying and researching old scriptures from different sources, both official and fan-made, we have created a compendium of Etherian lore. Warlords and warladies, today we would like to present the knowledge we gained about the Daemon race. 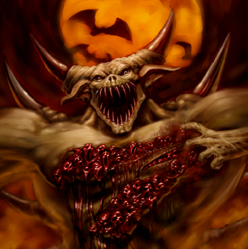 Twisted monsters and lost souls alike, daemons are the creation of the goddess Balora. Before all existed, there was only the transcendent mud called the Primordia. From this sprang all things - and a conflict that would last until the end of time. The first to crawl from the mud was the god Sirian, the allfather. He alone bore the knowledge of his existence, and despaired. From this, another creature rose from the mud - Balora, who knew as much as Sirian and represented the ultimate truth. The emotions of these gods were so great that another was created from the Primordia - the goddess Iris, who represented both belief and denial. Together, Balora and Iris are the nature of all things. Where Iris saw good in the nature of existence, Balora only saw evil. These conflicting moralities led them to the greatest battle to ever exist. After many eons, the battle favoured Iris, who created a new plane of existence so that Balora would be isolated. However, unknown to Iris, Balora desired isolation, for she had managed to accumulate a part of the Primordia during their battle.

So Hadesha, the world of nightmares, a land driven by despair and evil under Balora’s rule, came to be. Her children populated the world - every manner of horror, abomination and monster imaginable roamed the barren wastes and volcanic mountains. Some were truly malevolent beings, exercising the darkest thoughts of the daemon goddess, while others were mindless, seeking only to persist or end their own existences. These beings came to be known as daemons - immortal creatures who exist to assimilate and destroy. The most powerful of daemons were equal to Sirian, Iris and Balora. In order to combat Balora’s world, another world was created by Sirian and Iris, who together formed the pantheon. In this world of Etheria, separate from all other planes, lies the hopes of the gods, that on a dark day when daemons gather, the mortals of the realm may rise up and save their own creators from Balora’s will.

Every so often, the boundaries between the planes weaken. At these intersections, daemonic monsters and other alien aberrations break through and enter Etheria, especially so with the help of a summoner’s dark magic. Though spells exist which can summon and take control of daemons, they bow to no mortal master and will inevitably find a way to escape their bonds. Most daemons who have any form of consciousness are bloodthirsty, brutal creatures filled with furious hatred, though some can also be envious. The most dangerous daemons however, are those few with great intellect who are gifted with powerful magical abilities from the dark realms. The smallest and weakest of daemons can often be sorrowful, mischievous and fickle wretches whose agenda changes as quickly as the wind. Only the darker races and peoples can ever truly bear a daemon and they will often fight for superiority should they not be enslaved. Only the most powerful mortals whose goals align with Balora’s can ever freely command the monstrous races of Hadesha.

Just like many other races, daemons are capable workers when not using slaves or magic to fulfill their work. The most skilled of daemons can craft incredibly powerful, cursed artifacts which rival if not even succeed ancient elven works. The creations of daemons are highly distinct; they are frequently decorated in serrated points and with grim, gothic-looking monsters and symbols, including daemonic runes - a twisted, magical dialect of the dwarf god Morannin. Often bone, sinew, flesh and skin are used to adorn their works. Those with less skill are enslaved by stronger monsters or left to wander the plains of nightmare, either to die a horrible death to some mindless abomination or to fight against other rejects. Death for daemons holds no real meaning and none are afraid to die. Ceasing to be is such an inconsequential state that it has become a joke - killing others is a type of humour to them. The dead beast’s soul will simply reincarnate as a new daemon, born from a mockery of the Primordia.

It is said that the most wicked of mortals in Etheria may be reborn as daemons in Hadesha. Fueled by an unstoppable wave of nightmares and evil, the forces of Hadesha are some of the most powerful and dangerous to ever exist. Should they ever have the chance to unite and invade Etheria, both the world and the pantheon of gods would become the new plane of darkness and nightmares, ruled over by the supreme silver goddess Balora - so that all may come to realise her sombre truth.