After many months of studying and researching old scriptures from different sources, both official and fan-made, we have created a compendium of Etherian lore. Warlords and warladies, today we would like to present the knowledge we gained about the Barbarian race. 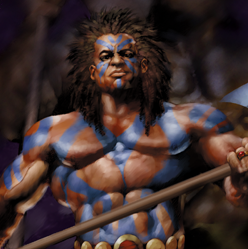 The nomadic tribes of Etheria from whom all humans derived are called barbarians. They appear as all other humans except with jet-black hair and a pallid, grey skin. They also tend to stand a little taller than most humans and have more muscular builds. Barbarians are masters of survival and of the horse, capable of moving and adapting to almost any environment, whether boiling hot, freezing cold or almost completely lifeless. As such, barbarians range throughout all of Etheria.

By many, barbarians seem to have a very turbulent and haphazard life. Their many tribes or clans can both appear and disappear within weeks. Tribal warfare is extremely common and can be fought over anything from land, inheritance or religion to something as petty as the ownership of a single horse. Warriors from defeated clans are likely to be adopted into others – even if the clan they are adopted into is the one which destroyed their own. Despite this, warriors adapt to their new roles and treat their new tribe like their own family. It is both dishonorable and punishable by death to commit a crime against one's own tribe. The weakest and least fortunate tribesmen are employed as slaves and are treated as property. All strong barbarians are trained in combat from an early age and have the right to challenge another barbarian given any reason, no matter how small. At the age of sixteen, all warriors undergo a trial to prove their worth and ascend into adulthood. In this way, tribesmen actually share the same interpretation of honor as their knight relatives. They almost never use underhanded methods and prefer to face their enemies out in the open. It is for this reason that many believe barbarians are as brave as they are simple, but this interpretation overlooks their martial cunning and quick thinking. Most barbarians may not be able to form particularly complex plans, but their strength, speed and skill can surprise and ultimately result in the death of many of their enemies.

The nomadic peoples worship nearly as many gods as there are tribes. Some of these are the major gods of the Pantheon or dark gods of the other realm, whilst many are minor spirits or even superstitions regarding strange phenomena (such as the sun, moon or stars). Their belief in these gods is absolute, no matter how little evidence they may have that these entities actually exist. It is for their simplicity and illogic that they are deemed to be primitive by most civilized peoples. There are, however, a rare few who are born with extraordinary insight – and it is these rare few who also share an affinity with the plane of magic. Such children are witch doctors and shamans, whom tribesmen believe to be servants of their gods. These people are usually the only few who can live long enough to be called 'Elder', and they serve as their chieftain's council and spiritual guides. Most of the time, however, barbarians can be as stubborn as a dwarf, brave as an Agarian Knight and foolish as a goblin in a dragon's nest.

Barbarians and nomadic humans epitomise freedom. Preferring to live in the wild as opposed to building settlements, tribesmen are nigh-unconquerable. So long as they live, so does their tribe. This freedom has not only safeguarded their survival in the past, but has also promoted their amazing capacity for adaptation. However, this same culture of resourcefulness may eventually lead to the end of the migratory lifestyle that fueled it, as some nomadic humans are discovering more complex crafting techniques and hence are beginning to settle. Using the skills they accumulated over past generations, barbarians have proven that they can withstand astonishing dangers and survive wherever they wish.