The first steps of designing the Asylum, the game's environment

Posted by TwistedJenius on Mar 5th, 2013

My elementary school became the inspiration for the insane asylum. Before we could really begin designing the specifics of the game, we needed a basic layout, a blueprint to work off of and I decided that the simple yet expansive hallway systems of the building in which I attended grades kindergarten through 5th, would be a good place to start.

The asylum, as it is in the game consists of the basic layout of my elementary school; multiplied by 6. The fictional building has three stories, each one made up of two mirrored, but slightly altered versions of the school's hallway system as I remember it. 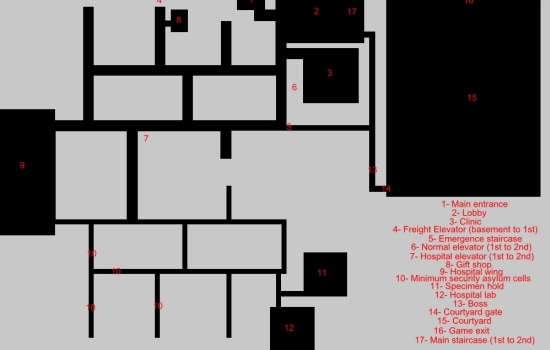 Aesthetically, it seemed appropriate to make the game feel more "institutional". From a practical game play standpoint, one of the reasons why we chose to have these long and mazelike hallway systems is because that allowed us to have a limited space which we would have to fill with content, props, textures, etc. while still creating plenty of area for the player to cover. Of course this also made it creepier and more confusing which adds to the atmosphere and exploration element of the game.

When designing the hallway systems we came up with a 2D blueprint of the building, and based on some of our stand-in characters that we were using, created a system of virtual "feet", which we used to create measurements and determine the size of various sections of the hallway. After establishing these "units of distance", we then began to decide how long it should take to travel through these hallways based on the units of distance and the speed at which we wanted the player to travel. This, in turn, helped us to get an idea how long we could expect the overall game to be. 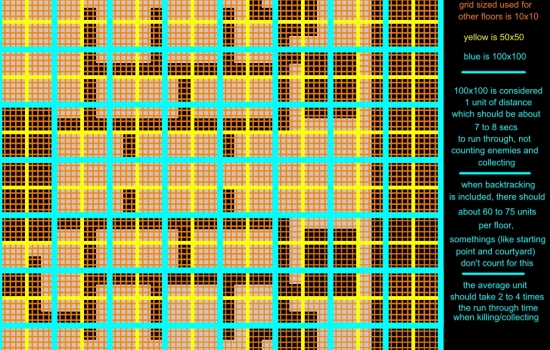 We then altered the height and width of the different hallway spaces according to the type of aesthetic feel and gameplay that we wanted for them. Some of the hallway sections have lower ceilings or are narrower than others depending on what part of the building you are in.

Because we were creating 3D hallways in what was a virtual, abstract space, we relied on temporary character mockup models to determine the relative sizes of what everything should be and used them as the scale for everything else in the game.

In some ways I would argue that the asylum itself is a character in the game and this is why we took such care with its design. The environment in which the player will be immersing themselves is a very important element to any game and this should not be underestimated by the developer. Your game's environment can have a large impact on both the aesthetic and emotional feel of the game, as well as the game play.