After thinking about this, I've decided to use "save spots" in Enola. The next step was to decide whatkind of object to use for those save spots.

I usually watch "let's play Enola" videos, and I've noticed that many never save in the game, so whenever they die they have to start from the begining. Maybe it's because the game is not complete and thus their first priority is to explore the game, not to actually "finish" it (because you can't finish it yet, anyway).

However, due to various reasons (the one described above being one of them) I decided to use "save spots" in Enola. There's also the fact save spots are some sort of "standard" in some horror games. For example, in Silent Hill 3 you use the halo of the sun icons to save the game, and in Fatal Frame you save at the glowing lamps. Also, I realized that using these save spots removes a lot of problems caused by "on demand saving." For example, in games like Half Life you can save while you're riding an elevator, or while you're moving something, and the system will save the state of every single object in the game (including the elevator's position). On the other hand, using save spots lets me focus on more specific (and more important) things.

After deciding I'd use save spots, the next step was to decide what kind of object to use. I knew I didn't wan't to use the usual poster/lamp/glowing orb/whatever. I wanted something that keeps some sort of relationship with the story. After thinking a lot about this one I decided on using the "treasure box." 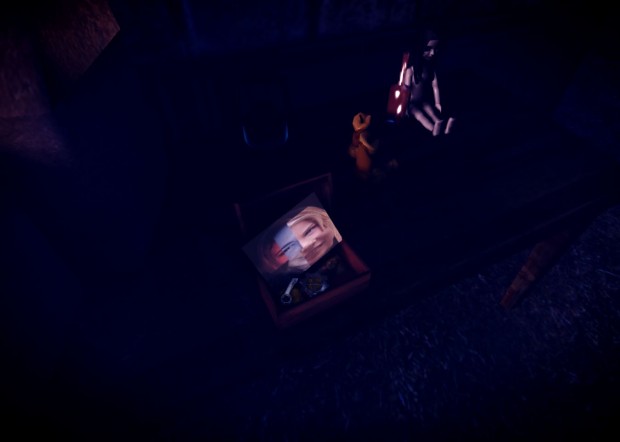 The treasure box is an item with a few elements inside it, each of them with a meaning. Also, the idea behind the "treasure box" is that it's used to store things for "safe keeping," meaning, things that are important and need to be kept so "you will remember." Using this logic, gameplay-wise the idea is that you, the player, use it to put "what's important to you" in a "safe" place (in this case, you save your game there).

One of the ideas behind Enola is that the majority of objects should have some underlying meaning, even if only the guys working on the game know what it means, and the treasure box is just one of those elements.