Hey guys! I’m going to be interviewing my fellow team members throughout the campaign and posting those interviews to IndieDB. The first person I had the pleasure of sitting down and speaking to via Skype is Wilmar Arroyave, the man responsible for creating ANU and HEX, though that doesn’t even begin to cover his contributions to the project!

Our campaign is LIVE!

Hey guys! As I’ve said in previous posts, I have the privilege of working with some IMMENSELY talented people. Unfortunately, we’re all so busy with our own responsibilities on this project and our lives beyond it that I’ve rarely had the opportunity to sit down and get to know any of them one on one. Now that our Kickstarter is live and our efforts are being focused on the campaign and demo, I’m happy to say that I’ve found that opportunity. I’m going to be interviewing my fellow team members throughout the campaign and posting those interviews as campaign updates. I’ll also be posting them to the development blog I’ve now been maintaining for a little over a month, so if you’re interested in getting an insight into The Center that’s still the best place to look!

The first person I had the pleasure of sitting down and speaking to via Skype is Wilmar Arroyave, the man responsible for creating ANU and HEX, though that doesn’t even begin to cover his contributions to the project. Will joined the team about six months ago, around the same time that I did. We were both introduced to the project through a mutual friend, Caris Frazier, a professor at Full Sail University in Florida who is credited as a business consultant on The Center. In fact, Caris was responsible for referring quite a few people to the project, so you’ll likely see her name come up a few times.

Anyway, without any further ado, here’s my interview with Will! 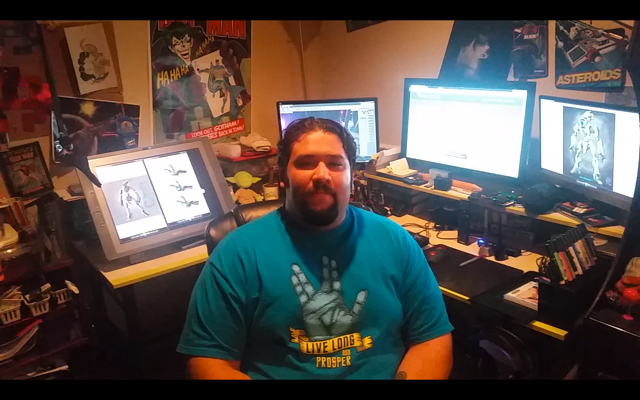 Will as he appears in the promotional video for The Center: Act I – AXIS.

How did you get started in game development?
Ever since I was a kid, I’ve always been an artist. I’ve always had a pencil in my hand, always sketching or drawing something. Whenever I’d watch TV, I’d go straight to a piece of paper afterwards to try to recreate what I saw. I used to watch Knight Rider and just fantasize about that car. Cartoons, too. I’d draw whatever blew my mind. 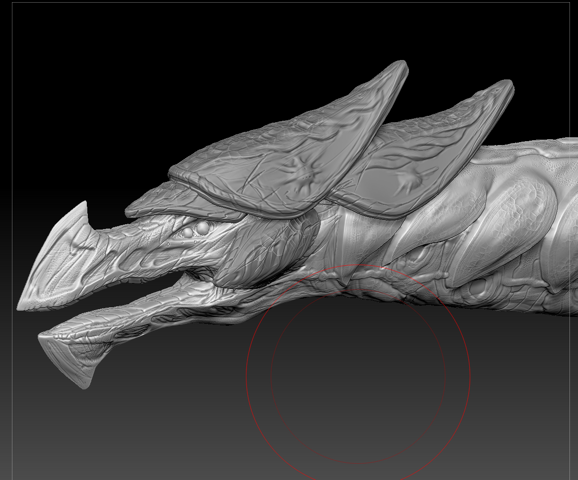 As time went on, I knew I wanted to do something that would incorporate art with my other interests. I also got into video games, and for the longest time I was told video games were a waste of time, designed to rot your brain, stuff like that. One day I was looking at a magazine and saw there was a bunch of stuff about making video games. I just sat there thinking, “video games are made by somebody… somebody actually makes them.” It was the first time I’d ever really sat there and thought about it like that. 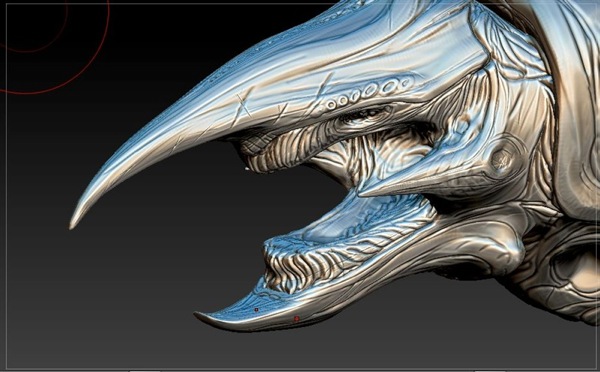 At that time, video games were making a transition into more visual stuff. It wasn’t just about the programmers and the math anymore. I realized that that’s what I wanted to do, so right out of high school I looked into art schools. There weren’t a lot of video game design or game art programs back then, though, and I wasn’t making any progress, so eventually I started to think I should try something else. I went to ITT Tech for their graphic design program but nothing really came of that, either. I had heard about Full Sail a couple of times and I decided to look into it a little bit more. I managed to give it a try, and I started to really learn the ins and outs of game design. It was probably the best thing I ever did… the best time in my life.

What made you want to work with Studio Daisho?
One of my little guilty pleasures is mechs. I love mechs and mechanical beings… I watch so much anime it’s disgusting, especially giant robot anime. Everybody at school knew I was the “mech guy.” Caris Frazier had been working on this project, and she put the word out that they needed somebody to create a mechanical character. Eventually it got to me and I reached out to her and we talked about what it was that they needed. She introduced me to Jason and John, they looked at my stuff, and we went from there to the first concepts of ANU.

What are your ‘tools of the trade,’ so to speak?
My primary 3D modeling package is Maya. I’ve found that it’s the most fluid. It’s not necessarily the best, but that’s relative… I actually started with 3D Studio Max, and if you would have asked me four years ago what the best package was that’s probably what I would have said. I used Maya at Full Sail, though, and I learned pretty quickly that Maya is a lot more fluid and a lot less technical than 3D Studio Max. It can do just as much, just in a different way. I also use ZBrush, which is fantastic for sculpting high-res 3D models. It’s a lot like working with clay, just a fantastic program. 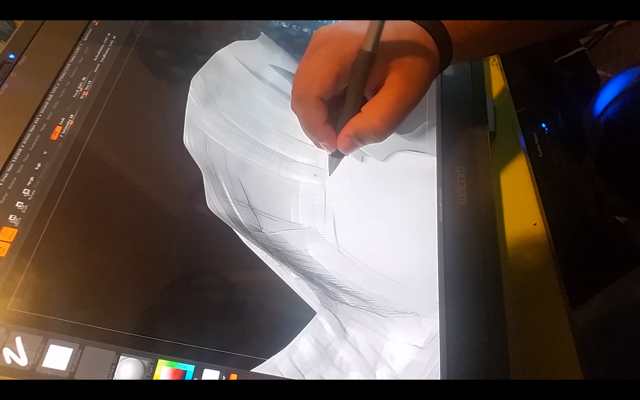 Will at work on his Wacom Cintiq 21UX.

Of everything I use, though, Photoshop is what I love using the most. You can do so much with it… I could do Photoshop pretty much all day long. For this project, I also work in Unreal, but that’s a completely different animal. Right when I got out of school, I was proficient in Unreal 3, but when Unreal 4 was released a few months out of school they had changed so much that I didn’t really have any idea what I was doing with it. It’s definitely been a learning experience. 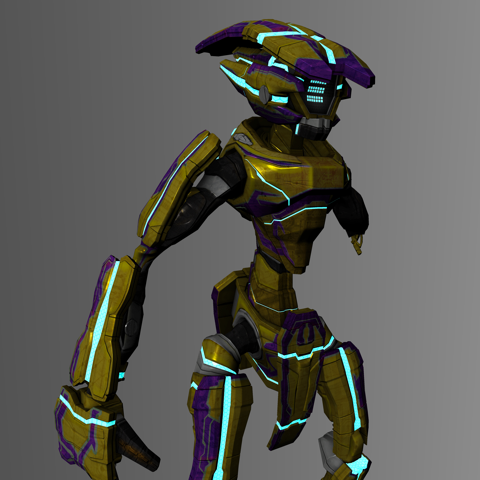 Which of the characters you’ve designed for The Center is your favorite?
So far, probably HEX. He’s not flashy, or covered in spikes and armor and all that. He’s just a really simple shape, but he still manages to get across a lot of emotion. These guys have animated him in a way that really brings him to life, and he’s just so much more than the sum of his parts.

And you came up with the concept for HEX’s “plates” too, right?
Yeah, it just kinda hit me one day. It’s just such a cool way to make a character do so much more with just a few extra parts. The character can be any shape it wants, and we can do anything with those shapes. When I came up with that I was so excited to tell them, and I’m so happy that they decided to go with it. 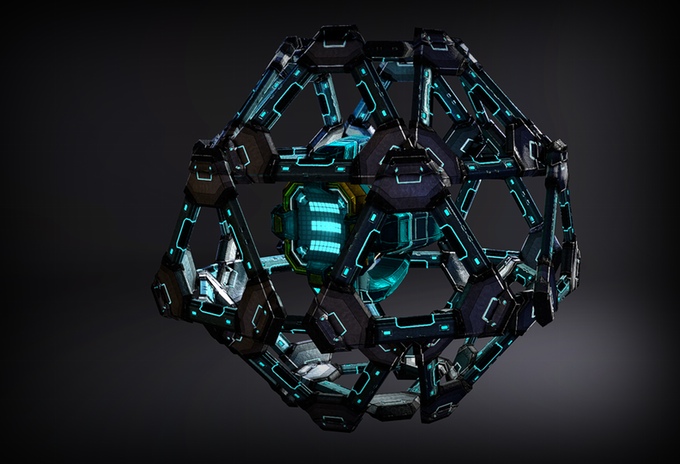 HEX using his “plates” to form the Cryosphere ability.

Do you have any prior experience with Kickstarter?
I’ve used it on one separate occasion. It was a first person shooter with a WW2 theme. It was a cool experience, my second year into Full Sail. The problem there was that we just didn’t really have very much. There’s a big difference between that project and this project, where we already have so much, and know what we still need to do. I think our Kickstarter can definitely go places, and I love Kickstarter because you can basically start a project from the ground up and take it to completion through it. You can just show your project to people and have them support you while you bring it to fruition… it feels like having a big web of support.

So… what’s your favorite game?
*laughs* So many people ask me this… I don’t actually think that’s a question I can answer. There are so many things I like, so many games. It’s a tough one. If you were to ask me what kinds of games I play, what I would say is that I love two types: I love games that get my mind off of everyday stuff through mindless shooting and killing of bad guys. Halo, Call of Duty, stuff like that, I love them. They’re not necessarily the greatest, deepest or prettiest games out there, but they’re just so good at helping you forget your everyday problems when you have them. 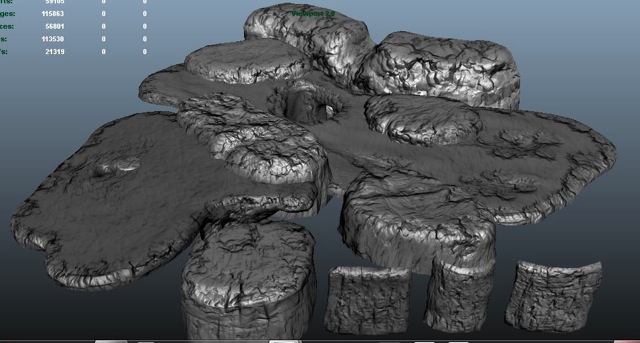 In addition to character work, Will sculpted and textured The Center’s environments.

And then there are the games that make you feel, the ones you can really get something out of. Games like Kingdom Hearts, Final Fantasy and other RPGs. Story based games like The Last of Us. The latest Tomb Raider too I thought was fantastic, great story, great visuals. Every now and then I’ll dabble in casual stuff like puzzle games, but those are mainly the kinds of games I like to play.

I admire that you can say you enjoy both types of games… it seems like gamers are too often divided into one camp or the other.
Yeah… I get a lot of crap from my ex-roommates and my friends from school and stuff, but I’m not ashamed to say it. I enjoy Halo and Call of Duty as much as the next guy.

I play Dynasty Warriors, so I can definitely relate.
Ohhh yeah… nothing like killing the same enemies over and over again, thirty at a time! *laughs*

That’s it for now, folks! Getting to know Will was certainly a treat for me, and I hope it has been for you as well. For my next interview, I’m planning on speaking to Paul Bennett, the lead programmer for The Center: Act I – AXIS. For those of you who are more interested in the programming aspect of our development than the artistic, you won’t want to miss it! If you’ve enjoyed this post and haven’t yet backed our project, I hope you’ll visit our campaign to check out all of the stuff we’ve been working on. It’s chock full of gifs, high-res images and information about Studio Daisho – who we are and what we stand for. Feel free to follow us on Facebook and Twitter for the latest news regarding our campaign and development, and don't forget to visit our website if you're interested in downloading our playable demo!