Today, we introduce you to the signature character of our current development version and, even more important, to the person who influenced our protagonist Nathaniel the most. Yes, we are talking about Omar El-Amin, justice of the peace in Al-Hamra, leader of the Clan, the man who joined Chayim Rosenthal a decade before the game takes place and took his son Nathaniel in after the gruesome murder of Chayim himself.

1828: Omar El-Amin is born as the son of an Ottoman officer and the daughter of a local merchant in in Jerusalem. 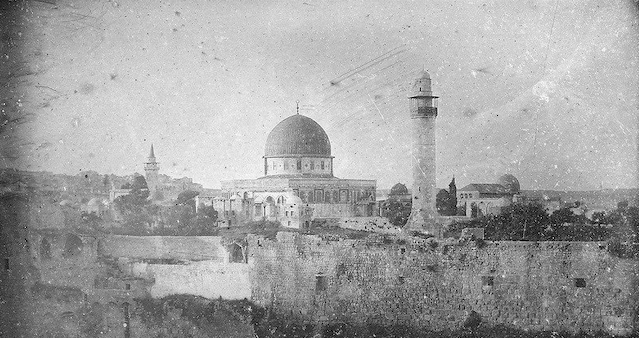 Jerusalem, first half of 19th century

1838 - 1848: Organized by his father, Omar receives the best education at hands, including private lessons from Persian scientists and Coptic monks in a remote monastery. It is rumoured that he befriended a young monk there who would later become the Abbott.

1849: Against the will of his father, Omar joins the Ottoman army and receives cadet training in Constantinople before being stationed in an Albanian garrison. 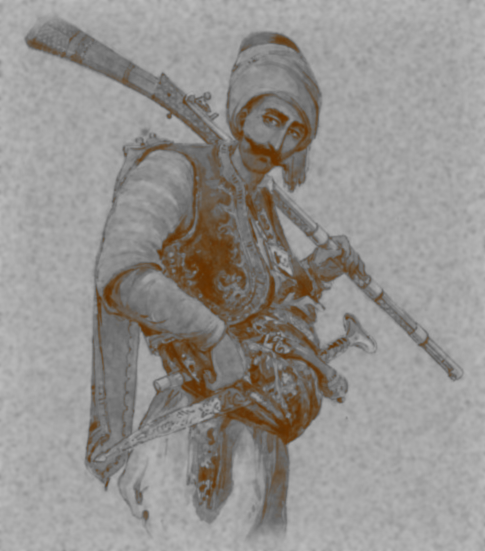 The harsh Albanian environment hardened Omar in many ways, but also opened his eyes for the needs of the poor and neglected.

1853 - 1856: With the outbreak of the Crimean war, Omar is sent to the frontlines and participates in the battles of Oltenitza, the siege of Sevastopol and the siege of Kars. Earning several battlefield promotions for wise tactics in small-scale skirmishes led by him and impressive courage in the field, he is assigned directly to the staff of Omar Pasha, fighting under his supervision until the end of the war. 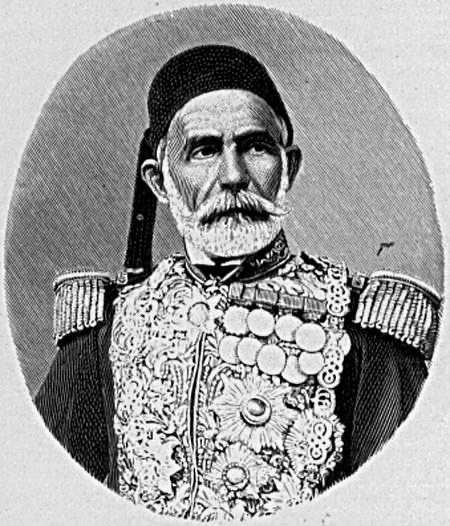 1861-1862: Being called to front again in the Montenegrin - Ottoman war, Omar El-Amin earnes a promotion to Major after taking Ostrag, but suffers from a severe shrapnel wound to his chest. He is discharged with full honours and a small pension from the Ottoman Army.

1864: Omar El-Amin is married to Niesha and takes over the map shop of her parents in Al-Hamra, in addition to that he starts acting as the justice of the peace in Al-Hamra.

1864-1876: Twelve years of peace and tranquillity are interrupted occasionally by the more and more pressing issue of bandits starting to interrupt the trade routes in the Holy Land. European merchants, representatives of European companies and adventurers start to roaming the desert. In a case regarding extended land rights, Omar rules against a young European adventurer named Chayim Rosenthal, but befriends him later.

1877-1878: Although far too old to be drafted by force, Omar is asked to return as Colonel into the Ottoman Army for the Russo - Turkish War. Seeing the Ottoman army being challenged by Russia, Romania, Serbia, Montenegro and Bulgaria at once, Omar is reluctant, but finally gives in. A horrible war turns the tide of fate for the Ottoman Empire... 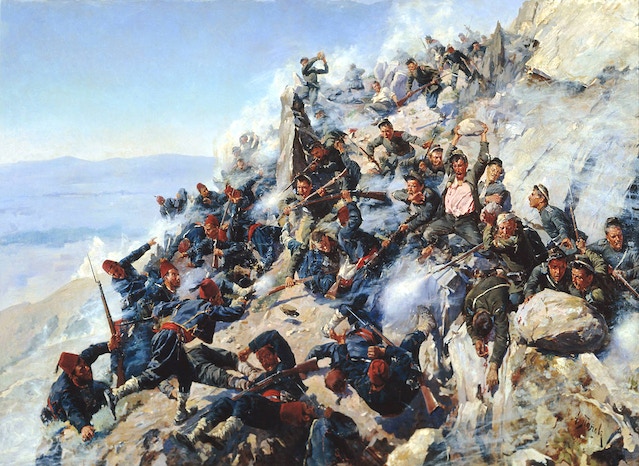 The Battle of Shipka Pass in August 1877

1878: Omar El-Amin is among those officials who negotiate the terms of peace after the disastrous defeat the Ottomans suffered in the war. During those negotiations, he actually befriends one of the Russian ambassadors. Still, there is nothing Omar can do to prevent the massive loss of the Ottoman Empires influence. He quits the army for good and returns to Al-Hamra.

1882 - Begin of our "alternate history": The crumbling of the Ottoman empire continues. The grip on the outer regions of the once vast empire gets weaker, chaos arises. Chayim Rosenthal welcomes the first settlers from the first Aliyah and urges Omar El-Amin to create a civil society and establish common, just laws for the region. Together with the local military administrator Hussein, they form an informal band they call "The Clan" with a vision of an own, independent, prosperous country for all of them.

1882: Betraying Omar and Chayim, the administrator hires foreign mercenaries, adds them to his own loyal troops and seizes power. In a surprise assault he slaughters Chayim Rosenthal and his family - except of Nathaniel, who is saved at the last moment by Omar and his most loyal men rushing in. A fierce battle is fought over two days and ends with a tactical draw. Husseins men withdraw back to The Capitol (our fictionalized Jerusalem), Omar and his troops set base in the mountain city of Al-Hamra. 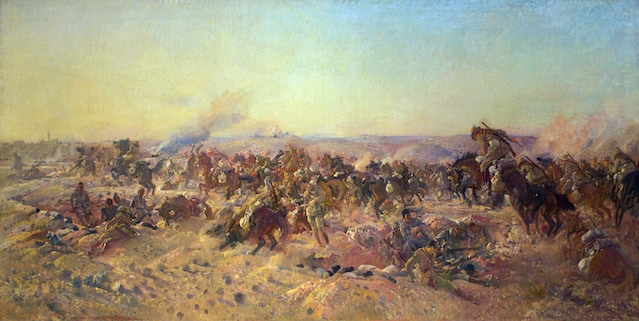 1882 - 1886: While a stall-mate of power between Omar and Hussein guarantees relative peace in the region, Nathaniel "Nate" Rosenthal grows up with Omar and his Wife. Having always wished for children, but never been blessed with having some of their own, the elder couple provides a loving home for Nathaniel and a solid education. However, Omar knows that Nathaniel must grow stronger, wiser and more experienced to be capable of full-filling his fathers dream one day. With a bleeding heart, he sends Nathaniel to the Russian Ambassador he befriended years ago and always kept contact with, ensuring Nathaniel receives the best education the Russian court has to offer and the military training he will hopefully never need. Hundreds of letters keep them in touch.

1892: Omar El-Amin has managed to form a strong alliance between the city of Al-Hamra, the farmers from the nearby oasis, the Jews returning to the home of their ancestors and several Persian traders. The time has come to think about retaking The Capitol itself, where people suffer from the tyranny of those who swore to protect them. He sends for Nathaniel to come home and claim his rightful leadership. 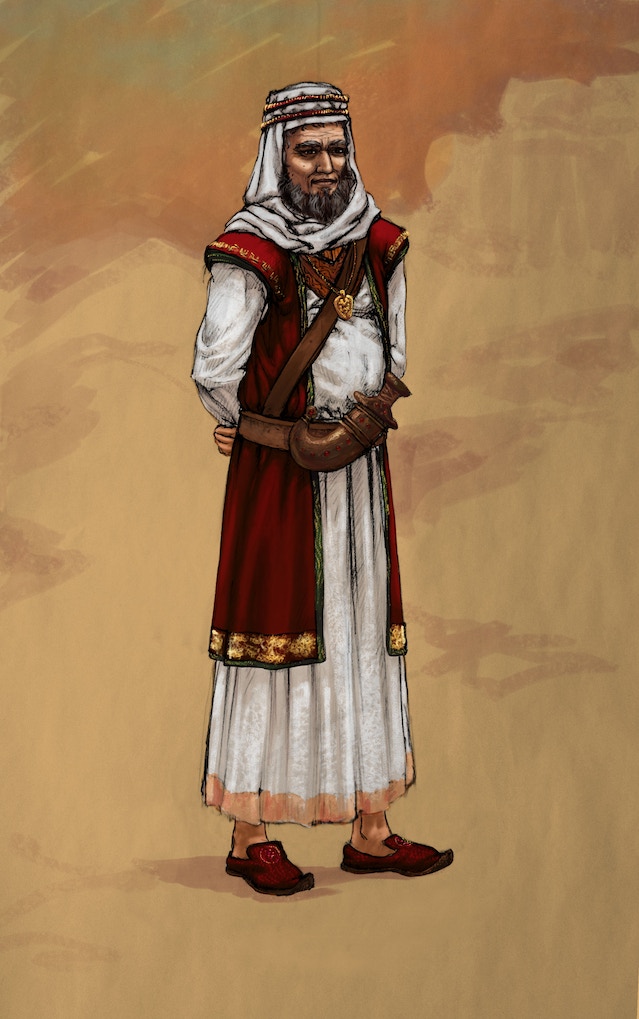 Omar in the year 1892 A.D., some months before Nathaniels return,
as concepted by our Lead 2D Artist & Art Director Luna Riedler 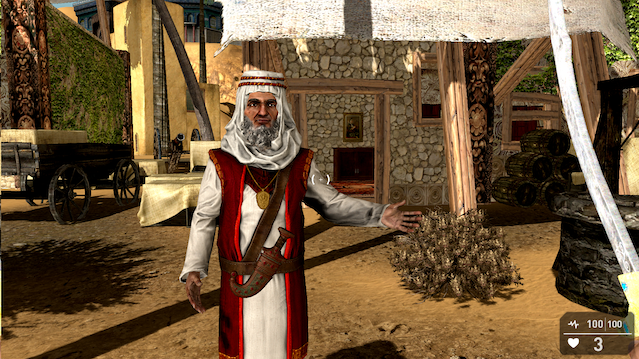 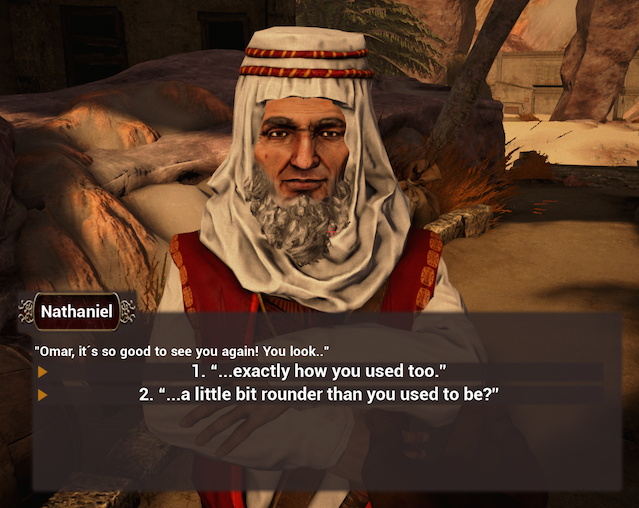 First dialogue between the player and Omar, Unreal Engine Fall 2015

Being the first major character to interact with the player, we went on a long search for the best voice actor possible. Having had a short-list of 12 candidates we thought to come close to our vision of how Omar should sound, we received some test lines from Dave Fennoy - and were immediately sold. He IS Omar, as you can hear in the intro video on the Kickstarter page. He has already spoken most of his lines, and we are currently working hard on implementing those into the game right now. Soem of those are even in the World Prototype.

Support us and hear him soon!