Post feature RSS Making a hero, from concept to gameplay

For the next series of features, I wanted to talk about all of the main characters which make up the cast of Arelite core. A lot of time and care was put into each of them, not only to give them an interesting storyline within the game, but also to ensure that they play off each other well and that their battle skills complement each other well. This article will cover how the story was written and how a hero was chosen to be the centerpiece of this adventure.

For the next series of features, I wanted to talk about all of the main characters which make up the cast of Arelite core. A lot of time and care was put into each of them, not only to give them an interesting storyline within the game, but also to ensure that they play off each other well and that their battle skills complement each other well. This article will cover how the story was written and how a hero was chosen to be the centerpiece of this adventure, and new articles covering every other hero will be released subsequently.

Arelite Core started with the desire to make a JRPG which harkened back to the SNES era of games, specifically Final Fantasy VI and Chrono Trigger. Both of those games have been very meaningful in defining the genre from a gameplay perspective as well as story telling perspective. However, I also wanted to avoid a lot of the tropes which often find their way in JRPGs. As such, I decided early on that I wouldn't be using amnesia as a trope, wouldn't have a silent protagonist and perhaps the most important choice, my hero would not be a soldier nor a warrior of any kind.

Instead, I wanted a hero who would be plausible as an adventurer and could hold his own in battles. I knew that he needed to be strong willed and strong in battle for players to accept him as the protagonist. As I browsed various roles, I decided that blacksmith would suit him perfectly. That role quickly evolved to master blacksmith, in part because I wanted to avoid the “chosen one” trope. Rather than having him discover that he's amazing, he starts off as skilled and knowledgeable, yet because he has never left his home village of Arreal, Karden can still stand to learn much from his journey. 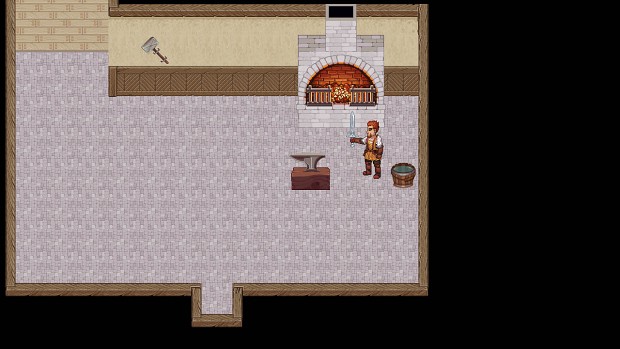 Having a blacksmith as a hero brought a world of possibilities. Forging became an important part of the game, opening customisation options which I knew I wanted to have. It also had a great impact on the design of the world as arelite, a metal with mystical abilities, took center stage for the story. Arelite became so important that it was added to the game's title. During the game, everyone is talking about arelite and gathering it, and having Karden as our hero made it easier to move the story along since he has at least a basic understanding of what's happening.

Now that I had his class, I began work on Karden's personality. As a master blacksmith, the next in line to lead the other smiths of Arreal, I needed him to have a more serious demeanor, to be responsible and because of the events that would transpire later in the story, I needed him to be heroic. As such, he's hardly the most fun character, but that in turn set the tone for the story. Arelite Core isn't a joyful adventure, but rather closer to Lord of the rings in terms of atmosphere. There's a great evil afoot and through circumstances, Karden finds himself thrust at the center of the conflict.

This led into his visual design, which I only contributed to summaily. I knew that I wanted red hair, and I didn't want him to be strongly armored. Also, like the other heroes, Karden needed a color pallet which would be distinctly him. I think the result speaks for itself, it brings out the blacksmith and the adventurer in him, without making Karden a soldier. 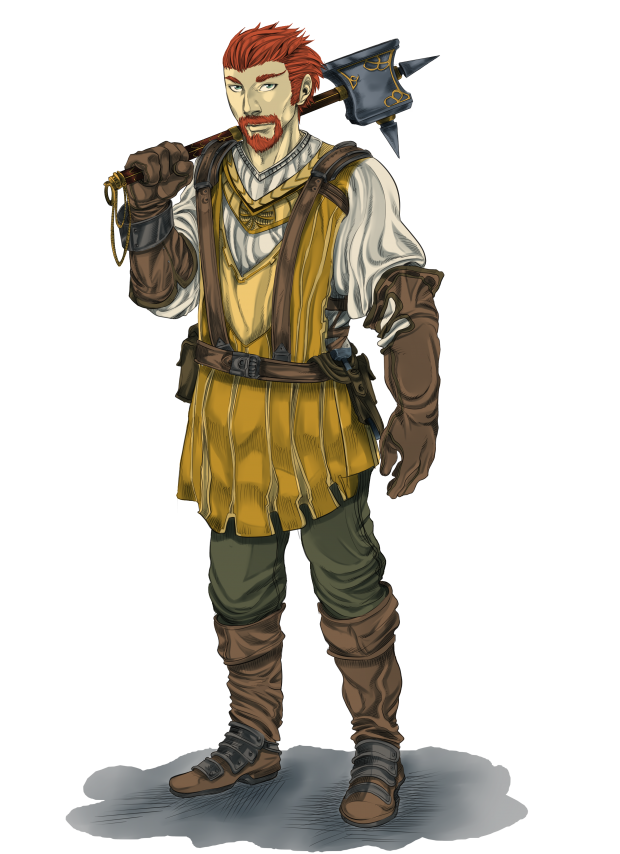 There are many other traits I wanted to avoid. I couldn't have him whining, I didn't want him to seek pity because he has to fight, but I also didn't want him to be a stoic character. Karden needed to be warm and helpful, he fights out of necessity, not because he wants to, but that doesn't mean he's going to back down. He can be uncertain at times and doesn't know how to face every situation, but he accepts his limits and pushes forward regardless.

As a counterweight to his more serious demeanor, I gave him Baeme as a sidekick, whom's profile I will cover next week. Baeme was younger, more impatient and reckless and their dynamic says a lot about Karden as well. He became a bit of a father figure to Baeme which fitted his personality perfectly. In a way, I think Baeme made it easier to accept Karden as the hero, because it made it easier to understand why having a more mature character in charge made sense. 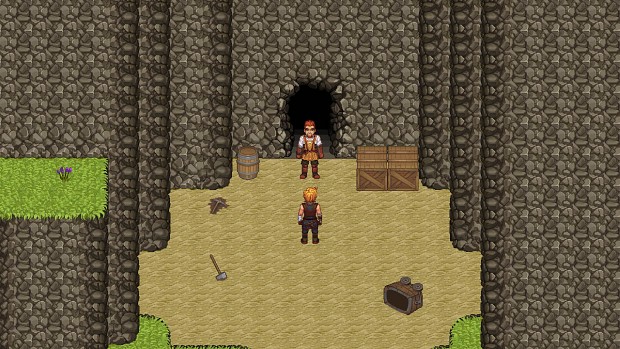 Karden and Baeme, off on an adventure

Unlike a lot of JRPGs, Arelite Core never lets the player choose who's in his party. I decided early on to have set characters at any moment, to provide better opportunities for character and story development, and to create memorable events which wouldn't be possible if characters couldn't leave the roster. As such, because Karden was always going to be part of the team, he needed to be able to hold his own in battle.

Karden is probably the strongest hero in the game, with his battle design being to keep him hitting hard at all times. His special moves underline this as they are all meant to either make him stronger or striking hard. As new battle aspects emerged, his role evolved to also being able to stun enemies, which makes them attack less frequently.

Finally, Karden is able to combo slam opponents, a type of attack which deals more damage according to the number of hits dealt to that enemy previously. While other characters are able to combo slam as well, they also often have other more important roles in the team, such as healing or increasing that combo counter. 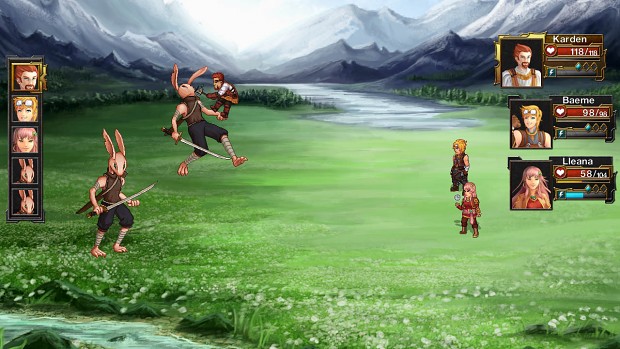 As far as the main 6 characters of Arelite Core, I know that Karden is the best suited to lead the others to victory and confront the dark forces. He's definitely not my favorite character in terms of his personality, but he's such a strong character overall that Karden is always very satisfying to have. He deals a lot of damage in battle, and has a strong but warm personality which keeps him relatable.

Next time, I'm going to cover Baeme, Karden's friend. Baeme is without a doubt my favorite character of the bunch, he's the most fun to write for and a lot of work was put into making him stand out. I look forward to properly presenting him.