I was called to arms by Swiss journalist & blogger Oldgamer, who had asked for an interview with no questions left out, no taboos and no "I am not allowed to tell you" in the answers. Although the last part of the request could interfere with some older NDAs I signed, I agreed - and we had some interesting Q&A pingpong before the interview was finished. Enjoy an excerpt here!

Usually I have one or two interview requests per week, but most of them aren`t linked to my work as Indie developer, of course there is more interest in the bigger commerical productions I work as producer or consultant on. Or, and these are the really nasty requests, some business or gaming journalists try to press me revealing insider informations about the meltdown of JoWooD and Dreamcatcher. This may sound interesting. most likely it would be so, but there are legal boundaries to what I am allowed to tell. 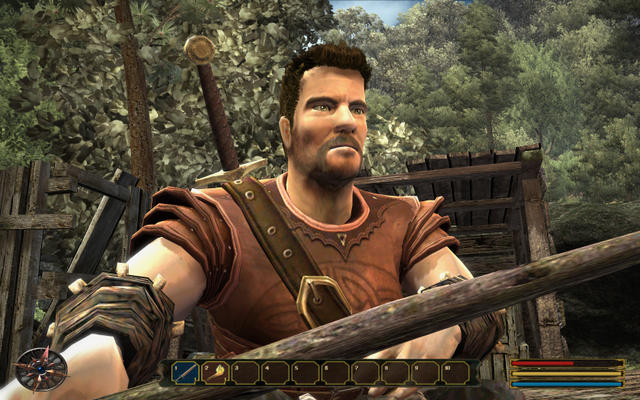 Yes, many journalists wonder why JoWooD went benkrupt and took Dreamcatcher down as well. Sorry, I can´t tell all stories. Besides, you wouldn ´t believe them.


So when the friendly Swiss blogger "Oldgamer" asked for an interview without limits, I hesitated. And if it hadn´t been the same guy who had contributed to the popularity of Into the Dark so heavilly and who has kept all as "confidental" tagged screens for him self as well as a total of three press versions, I would have disagreed. But I didn`t, and so you can read the Interview on his Hub as well as an excerpt here . but a commented excerpt with additional informations. Let´s go:

Ivan, your latest game, "Into the Dark", has scored some really awesome ratings and seems to be the "best" or let´s better say, the most entertaining game you have ever created as an developer. But still the boxed version had some issues, and even the Desura Edition was hotfixed soon.
Allmost all the games you had worked on during your time at JoWooD came out buggy - Gothic 3 is stil famous as THE bug-desaster of 2006, The Guild 2 had severe issues. Painkiller Resurrection, which was developed by you and your Homegrown Team, was on the brink of "unplayable" before you released the patch.

Painkiller: Resurrection was (at first) despite some great ideas and atmosphere buggy, flawed, almost broken. Are bugs your personal trademark?

"Perhaps they are - but for sure not on purpose. Gothic 3 and The Guild 2 were examples of the unholy combination "unleashed developer who wants to implement everything he thinks is awesome" and "Publisher with lack of money AND lack of control mechanisms and sends a producer that becomes stockholm-syndromed and thinks he´s part of the devs".

I had no influence, because then, as Community Manager, it was my Job to clean up the mess after the damage (release) was done. Painkiller Resurrection, on the other hand, is personal stain. JoWooD was alread in heavy financial troubles when they signed of the project. After two months in the making, they realized that technically their subsidiary company "Dreamcatcher" had the rigths, and they moved the project to Dreamcatcher - a company already bled out and running out of funds at all. In Summer 2009, only 45000 of the total budget of 110.000 Euros had been payed out, and the release was schedueld for fall. The internal producing....

Then came some ranting about my personal problems and the financial situation at JoWooD, but I took it out here as most likely it isn`t that interesting for you.

Sounds like publishers (or at least the ones you were attached to) are pure evil. Is this your personal experience, too?

"It´s not always evil greed that leads to catastrophic events, although it ´s the most common cause. There is also a lack of professionalism in smaller and medium companies, but, on the other hand, big companies often judge their internal decisions based upon almost automated guidelines, which is also very risky. From a business-relationship point of view, developers are always in a begging position and endangered to be blackmailed the publisher, as long as the publisher doesn´t have the good faith to build up a long-lasting relationship with you. I had an article published on IndieDB that was feautured in many blogs regarding the difficulties you have to expect as Dev dealing with publishers, I suggest everyone interested in the topic starts reading here:

However, with a publisher bringing your game to market you have certain advantages compared to a life as self-publishing Indie."

"First and most important, Marketing, PR and Sales power you can never build up on your own. They have their own distribution and sales guys, convincing major retail markets to put out your game on shelves - which leads to a certain percentage of sold games no matter how hyped and good the game is. And, although in the most cases the developer will be charged for it when the royality report comes in, a publisher can flood the gaming world with trailers that cost more than an average Indie dev has total budget for his game. Even small and financially shaken publishers like JoWoOD put up trailer like this one...

...and it´s less likely that you will be ignored by the game magazines. That`s another big issue. Most people we describe as game journalists have nothing to do with real journalism - and I know what I am talking about, from 1997 to 2003 I was workign as a real journalists digging into the dirty secrets of politics and business.
Todays game journalists, at least in the big commercial magazines, are often a sad mixture of copywriters and copycats.

A journalist is someone who gets a hint for a story, follows the hint, nails the facts down, does a check and re-check and then publishes something new, interesting, exciting. A typical games journalist spends 90% of the work time reading, selecting and re-writing press releases and other materials provided by the publishers.

Don ´t get me wrong: There are great examples of REAL gaming journalism out there, RockPaperShotgun, Escapist and of course the lone warriors of the blogosphere, but the big common supercommercial hedgefundowned mags have their decision process nailed down to:

- Is the game from a publisher that will buy advertisements?
- Is it the sequel to a game we were already writing about?
- Is the game already hyped by other magazines?

If you don´t have a "yes" on at least one of those questions, the chances of your game getting coverage are going down in a blaze of glory.

I did not want to emphasize that you stop being Indie and throw yourself into the arms of the next publisher who comes along, the contrary is rather the truth. But you should be aware that you have to compensate several factors oyu cannot control as an Indie as good as a publisher drawing the cheque book in front of the advertisement departement of a magazine. Now, let ´s go on:

What do YOU do to avoid the traps?

"I sell the BOXED distribution rights for a certain territory to a smaller publisher as soon as the game is so far developed that I can be sure it will be finsihed no matter what happens.You don´t get much cash for that, surely not enough to cover your costs and a decent payment for your working hours on the project, but you will be covered in the magazines I mentioned before and there is at least the possibility that an evil lawyer in a legal departement stands by to sue the ones ripping too much off your game and / or idea. I have never sued anyone so far, and everyone who sued me lost, but having a bigger company as backup for legal battles is at least a comforting thought. As long as this company won´t go to legal war against you, of course."

First of all, it gave me a booth at the GamesCom in Cologne, a great opportunity to promote the game. Second, the press versions sent out by the German publisher led to the GameTube Coverage, and this one boosted the awareness heavily. This was also very important, because the print magazines were afraid of covering "Into the Dark" due to the references to the 3rd Reich and the mature content.

Well, we released the improved, bug-fixed and heavily enhanced "Trash Game of the Year" Edition on Desura, for a very humble price.

Now we do some contracted work to have the monthly bills payed, and then the sequel "Into the Ice" will be created. For this, we will most likely switch the engine. Either we go for Unity or, my personal favorite, we will use the FPSC-R which is right now under developement at TGC.

What can we expect from "Into the Ice"?

On the gameplay side, we will have the fasci-nation value, basically an addition to health and sanity which are already present. If the player watches too much NSL propaganda, the player char will get fascinated by the retro-fascism, and if the player doesn´t react to that in order to reduce the fasci-nation of Pete, Pete will change the sides and join the NSL forces, which leads to an alternate ending and "Game Over". Another point is that in the outdoor regions you will be endangered by low temperatures, you can even freeze to death.

On the GFX front I have something in mind that no other game on PC (and of course not on consoles) has yet. While Tesselation and raw calculating power of modern day GFX cards have led to a situation where you can have almost limitless polygons in scene, the textures are left behind. Even AAA games with budgets of dozens of million dollars have textures with resolutions lower than the maximum viewport resolution when you are close to them. If you run to a wall, or crouch on the floor, and look at the textures, you see them pixelated or blurred because filter mechanisms try to compensate. Basically, if you get closer, you see LESS details. In real life, when you put your nose to the ground, you see MORE details. I have developed a texturing & shading technique that allows for a real-life surface eyxperience - even in our old FPSC engine.

Any chance to take a look at this?

Here I showed the first Pic of my new texturing & shader technology. However, in the meantime I came further and so I give YOU as fellow IndieDB follower the latest picture: 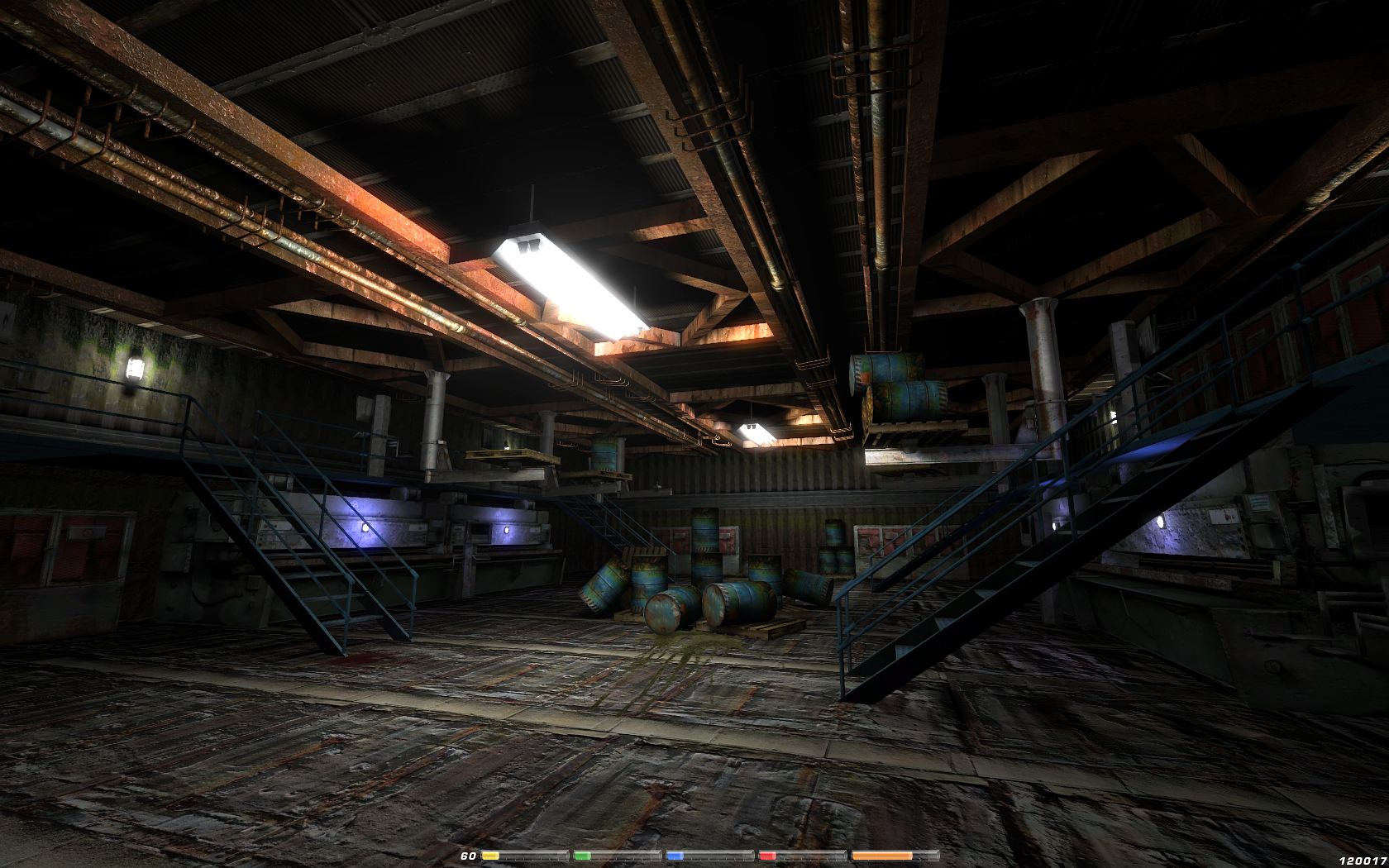 Read the full Interview HERE
or