A quick look at why HOPE is unique, how it is based on a passion for understanding videogame characters and how it is informed by research.

I’m recovering from a cold that has interrupted most of my time to work on HOPE for the last week. Luckily Valentin was working on some art in that time, so not a complete loss. But while I was ill in bed, I got to thinking that it might be useful to explain how HOPE is unique. 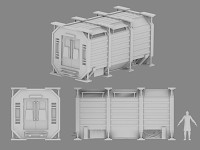 My name is Phil Carlisle, also known online as zoombapup (since the early nineties). So to start at the beginning, back in 2004 I had just finished working on Worms 3D. I’d spent roughly 8 years working on various Worms games and was frankly just burnt out working on “franchise” style games. I’d had a lot of fun at Team17 and had worked with some great people, but I was looking for something new. I looked around for jobs involving game development and design that would involve passing on my experience, so I was looking at jobs in education and industry (primarily as a developer relations guy). I happened upon a job at a local university who were looking to get their game development programmes staffed up with industry experienced people. The academic job allowed me time to pursue development, whilst really challenging me to look at my understanding of games and my specific interests more closely.

I’d been doing AI code for much of the time on Worms 3D. Specifically things like camera control, pathfinding, the sort of meat-and-potato stuff of AI. But that experience had given me the AI bug.

I quickly realized that academically I would have to explore the field of game AI in more depth. Especially given my experience and after seeing so many games struggle with it, it seemed like a problem worth looking at.

So fast forward a few years and I've been doing my PhD on an area of believable agents I’m calling “Digital Actors” because that is what I’m after (lets not get into semantics, but ultimately I’m trying to suggest here that what is important is the “performance” part of AI, not the “intelligence” part). I have spoken at conferences around the world about the problems associated with game characters. I have spoken about game developers not taking characters and character observation seriously. Failing to learn lessons from other media etc. I think about how games always tend to fail because ultimately they are “safer” when scripted, so the majority of games have very little emergence and a lot of scripting and hence lots of failures of AI to react in a believable manner.

That’s not to say its a failure of technology, or a failure of game AI programmers in general to understand the need for better characters. But its clearly an issue going forward, because we still see games selling in huge numbers with relatively poor characters, or ones that are just plain annoying (skyrim “companion” standing in doorways anyone?). The thing I realize is that unless gamers require experiences that are deeper and with characters that are more believable, then we are going to see the same old issues forever. This isn't a technology problem but more a value one. Game characters simply aren't valued as much as in other media. Because games still sell well with “poor” characters. 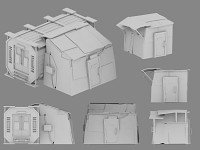 Its at this point, after a brief stint on another project where we ship an AI authoring system for
non-programmers, that I decide enough is enough. I decide that I’m going to tackle this issue head on, by trying to make an indie game that shows what an emergent behavior-based AI world would be like. In order to achieve this, I need to define a world with depth and character of its own. I realize that to really sell the characters, I need the world to be equally convincing and the freedom of mechanics to be such that the player can feel immersed in their role. The idea being that the game isn't simply about a single mechanic. Or about manipulating a set of characters. But is ultimately about being part of a society.

So what does it all mean?

To date, most of the development videos have been about the physics mechanics, because those are the parts I didn't have a great vision for. But as we move further towards the goal of the endgame, you’ll see development skew towards more AI driven systems. A good example is right now, I’m starting to flesh out the trade system. This is a system that dynamically balances trade between the rigs (the home bases that exist within the world), this dynamic balance is an AI driven system that will cooperate with other AI systems such that you’ll feel that trade isn't simply a mechanical function. For instance traders will have personalities, moods and emotional attitudes to you. They will respond to your actions in how they deal with you on a trade level. An example would be that if you happen to have a lot of people on your rig from a certain background, then traders will be more or less likely to deal with you depending on their affiliations. But these will not simply be fixed relationships. Play fair with one trader and your reputation will spread. Form a good relationship with the citizens of your rig and maybe you’ll get a visit from traders from the rigs of their relatives.

This emergence of interconnected systems, tied in with real behavioral responses from your citizens when they see you taking actions is what is driving the game forward. In this way I’m trying to push at the edges of game character AI and hopefully adding to our understanding of game characters and our reaction to them.

I’ll hopefully be able to post a video soon of how an individual trade will work, although there are a bunch of systems to build before they are fully realized (ships need to dock, need methods of loading/unloading etc). Then I’ll explain in more detail how the trade system will balance and self organize.

I look forward to showing more of the characters too. We’re hard at work defining how those will look right now. Trying to get a style for them that allows for expression and movement, but trying to get away from any “realism”.

Oh, I really like this. Sounded like a great setting and concept to begin with, but the addition of the social emphasis and intent to take the AI to the next level really sounds fascinating! Good luck with this - sounds like it could really revolutionize things!

I'd settle for "this was fairly well done and felt different" right now :) thanks though.