We wanted our guns in Blood will be Spilled to be artifacts - based on the true guns of the Old West, yet stylized in our own way. Take a look at the first part of our arsenal.

Posted by DoublequoteStudio on Jan 20th, 2016 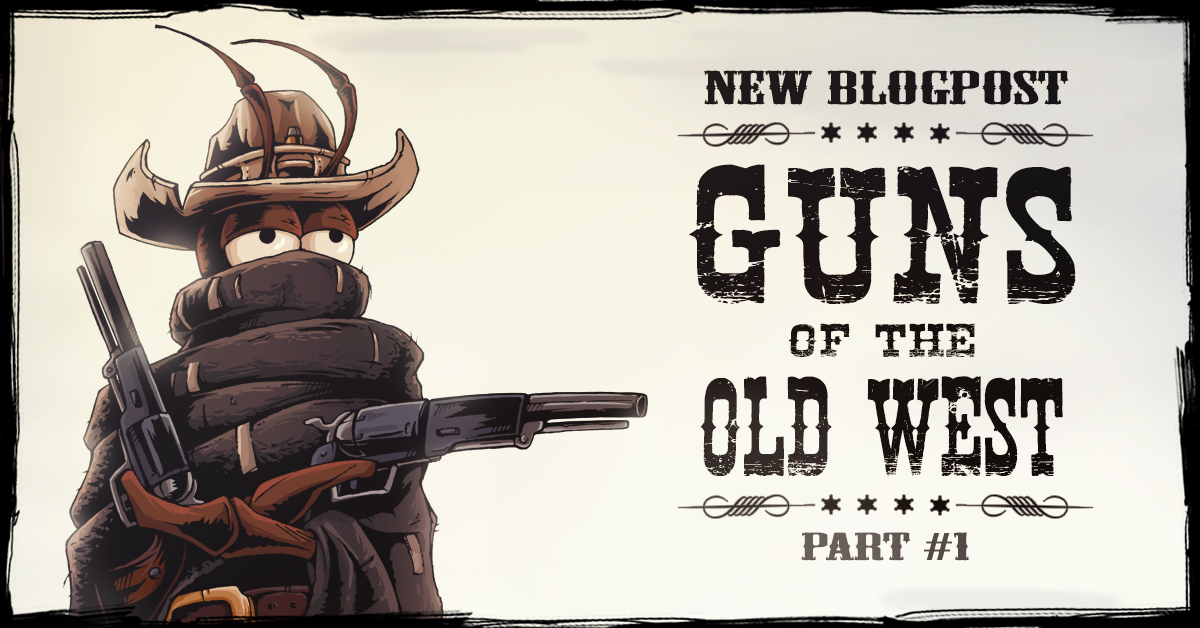 Old six-shooters and rifles are probably one of the most significant symbols of the western genre. In our game we focus strongly on the gun handling part - quick-drawing, aiming, shooting and (of course) reloading. That is why we also wanted our guns to be some kind of artifacts - based on the true guns of the Old West, yet stylized with some added flavour or a reference. Let's take a look at the first part of our arsenal and...let them guns do the talking.

In 1873, Colt’s Single Action Army revolver became the US Army’s standard sidearm. Heavily adopted by lawmen, Single Action Army earned the nickname “Peacemaker” and is the classic gun of the old west. Single Action Army is a refinement of the earlier percussion revolvers. The term "single action" refers to the behavior of the trigger. When shooting, the gunslinger draws the hammer to full cock position manually before each shot and pulls the trigger, performing only a single action, releasing the hammer. Peacemakers are loaded by opening a loading gate on the right side of the gun, behind the cylinder. The gun was designed to load all six chambers, however many shooters had a practice of leaving an empty chamber right under the hammer for safety reasons. Still, there is no safety guaranteed for your enemies standing on the wrong side of the barrel. 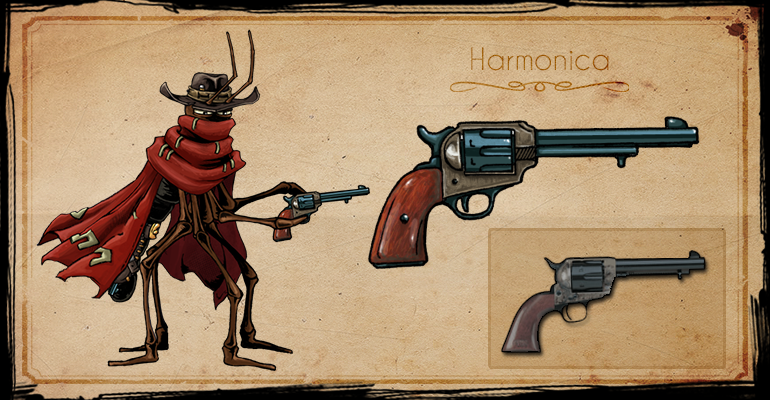 The Colt 1878 double-action revolver is also referred to as the "Frontier" or the "Double Action Army" revolver.

2) release the hammer to fire, so there is no need to cock the hammer manually before each shot.

The Model 1878 was more robust and reliable design than the previous model 1877, which had a bad reputation for failures and earned the nickname "the gunsmith's favorite". Typically, the hammer spring would fail and reduce the revolver to single-action only. Loading is basically same as in the previous case, by opening a loading gate on the right side. Standard grips were made of black checkered hard rubber.

An ideal choice of guns for our dual wielding "Pablo" type enemies, particularly because they are not very smart and skilled gunmen. 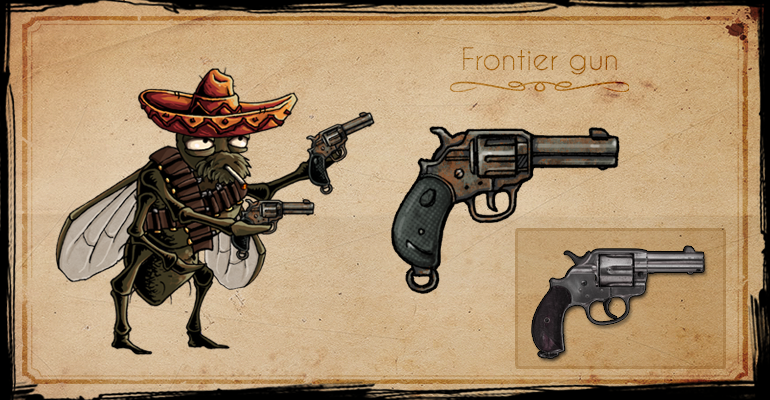 The Colt Walker 1847 was a large percussion single-action cap and ball revolver, the largest and most powerful black powder repeating handgun ever made. The Walker holds a powder charge more than twice the amount of what a typical black powder revolver holds and was extremely powerful at close range. Unloaded gun weighs 2 kg (4.5 lbs). At the time it was popular among the Rangers of the newly independent Republic of Texas. But it was not all perfect - the revolver cylinder sometimes exploded after firing and the loading lever used to drop during recoil, preventing fast shooting. The Colt Walker model was later improved as a new revolver Colt Dragoon, largely using leftover Walker parts and fixing all the previously mentioned problems.

Our old greedy Sullivan is kind of sentimental and stayed true to his old revolver, based on Walker for years. He obviously enjoys holding so much power in his hands. Colt Walker (converted to fire cartridges) was the characteristic weapon of choice for Clint Eastwood in the movie The Outlaw Josey Wales (1976) 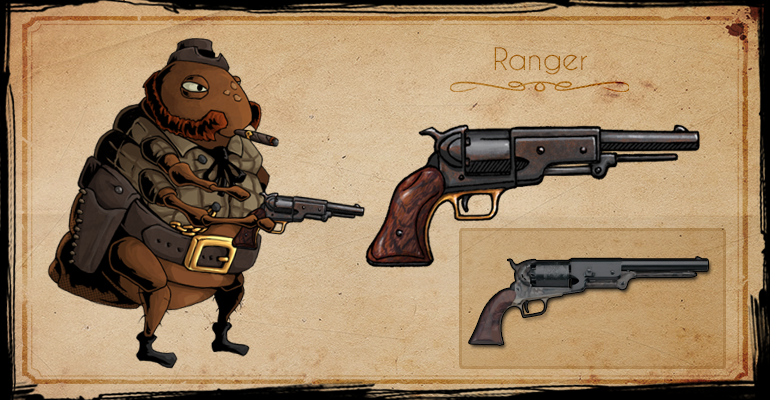 The Winchester Model 1873 was one of the most successful Winchester rifles of its days and was called "the rifle that won the West”. The success of the 1873 rifle was assured when Single Action Army revolver was offered in the same caliber, so the gunslinger needed only one cartridge belt for both - rifle and his six-gun. The finger lever, which serves also as a trigger guard, made the "repeating" action possible. The elliptical loading port was to the lower right side, while the ejector port was along the top side of the gun body. The spring-loaded tube could hold up to 15 cartridges.

There is no better type of rifle for our sharpshooter type enemies (with working names Frank and Reno), so they could shoot you dead from a safe distance. Henry Fonda actually used two Winchester 1873 during his dramatic stand-off with 150 members of the Wild Bunch gang in the movie My Name is Nobody (1973). 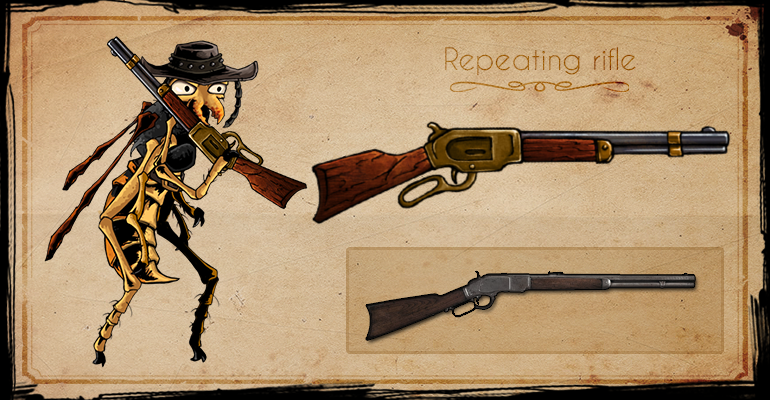 Our game character Queen of Hearts has a "lupara" style break-open custom made and engraved shotgun called "Sweetheart", ready to cut in half all the troublemakers in her Saloon. A real sweetheart indeed. It has the side-by-side barrels configuration (creating a heart shape when looking from the front) with two hammers and two triggers, one for each barrel. This allows to fire separately, but also to pull both triggers at once, firing both barrels simultaneously in case you need more firepower (which also doubles the recoil). 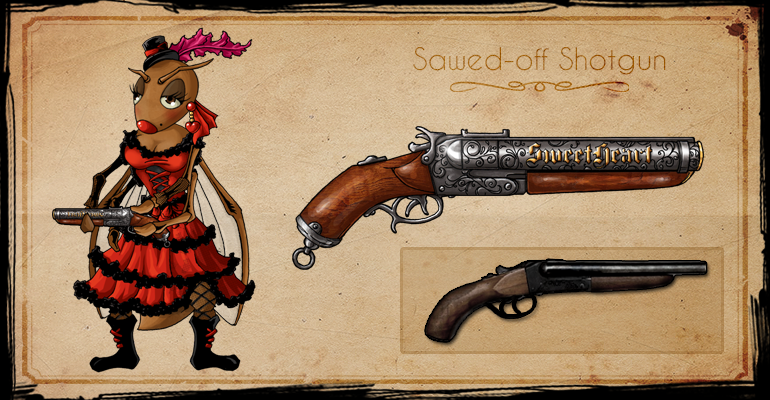 The Gatling gun is one of the best-known early rapid-fire weapons and the first to possess a mechanical cycle of function using a single common feed source. The multi-barrel design facilitated both cooling and synchronized firing-reloading sequence. Each barrel fires a single shot when a certain point of the circle is reached, right after the used cartridge is ejected and a new round is loaded. First Gatling guns required a person to crank it and up to four persons to operate it. Various models of Gatling were produced in various calibres, usually with six barrels but some with up to ten.

Naturally we used a ten barrels similar to the 1865 model - the more the merrier. Various models of gatling guns and machine guns are used in many spaghetti-westerns, so we are not going to be the exception. You can see lots of Union soldiers firing gatling guns in the movie The Good, the Bad and the Ugly (1966) if you want to watch this magnificent machine in action. 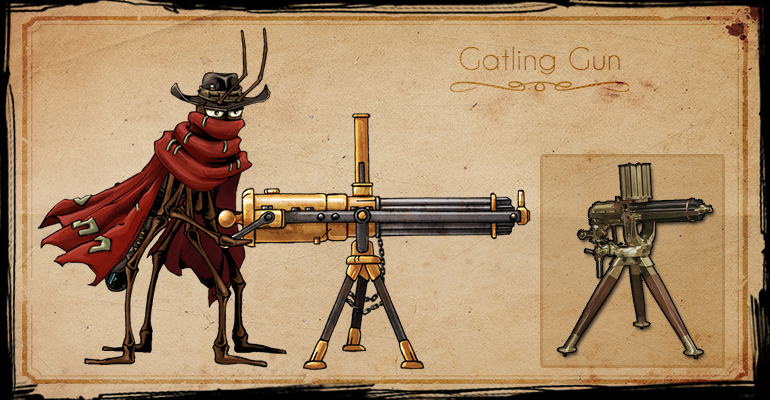 So, that's it for part one. If you want to follow how we're doing with the game, be sure to check our facebook, instagram and twitter from time to time for the latest info.

Art Director of Blood will be Spilled