Here you can find interesting facts & background about all main characters encountered during the first chapter of the Gray Zone.

Meet the most badass rebel crew of Deleon.

Valern Thon is the main character of our story. He is a member of the 7th Tribe, born a slave on the planet Crust under the rule of pirates and slavers. As a kid, he already had to work in local stone quarries and iron mines without even a glimpse of freedom.

He thought he would have lived this kind of life for the rest of his days. A new opportunity emerged with a glamorous revelation when a mining shift discovered an ancient teleportation device and kept it a secret among other members of the tribe. People knew many legends about this ancient civilization.

One legend says that many had tried to enter the portal and in most cases they disappeared forever. In spite of this knowledge, Valern and few others volunteered to enter the teleport when the time is right in the hope of arriving at a better place where they could re-build their society, form a strong nation and liberate the rest of their tribe. 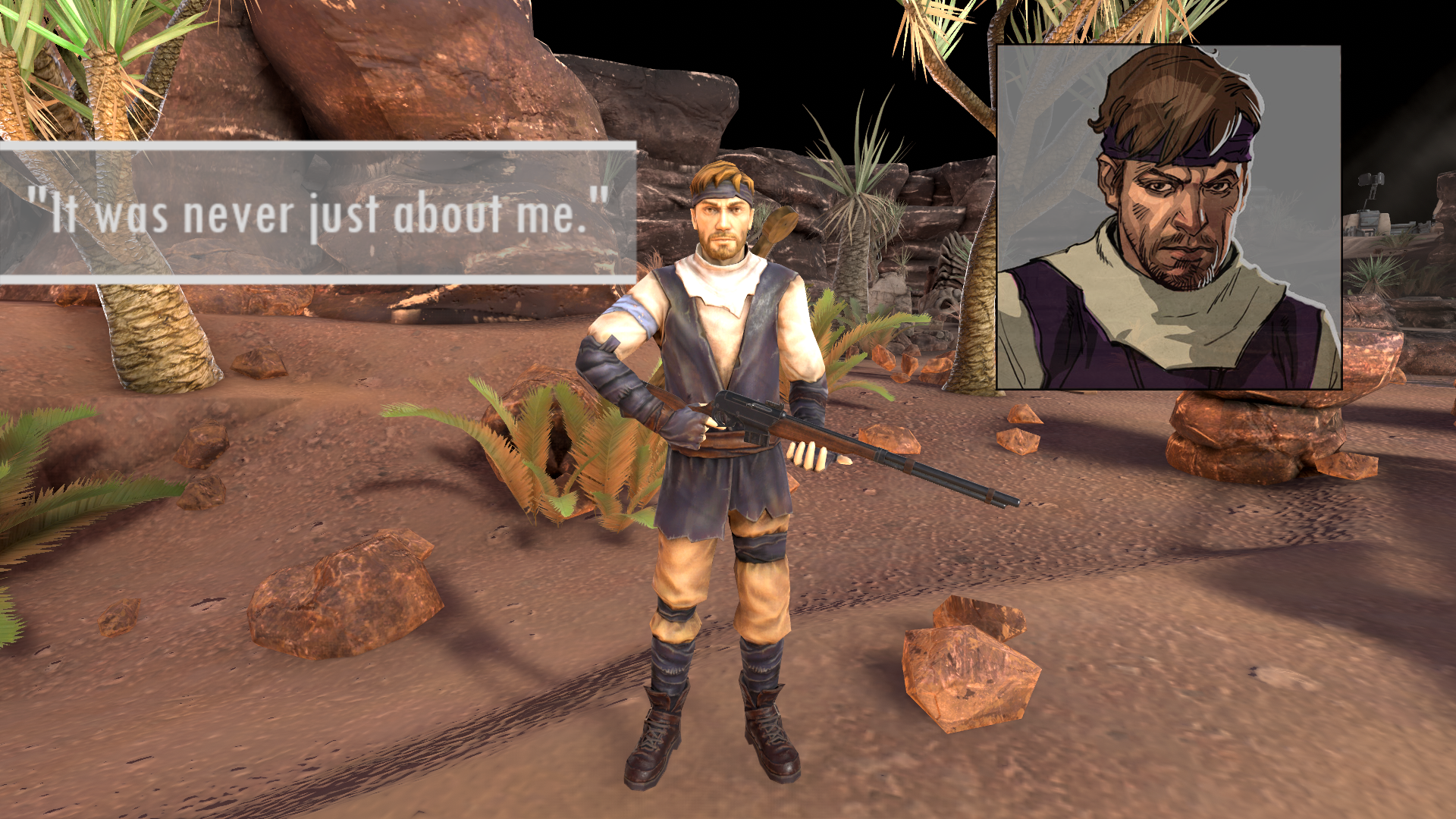 Anika was born on planet Korath at the beginning of the 3rd era. As she was growing up, she found an interest in the local mining industry. She graduated at the local mining university as a mining engineer and got a job at a mining company under Union administrative. She took her job seriously and climbed up the ranks pretty fast.

She was assigned a Tridium mining automatization project. During one inspection of an excavator prototype, the machine malfunctioned causing an electromagnetic discharge that killed everyone in its vicinity except Anika. Discharge hit her so hard that her spirit jumped from her body into a nearby Tridium crystal. She became a 'Tridium ghost'. Too bad for her that the shaft was closed for safety reasons and the automatization project closed. She was imprisoned there for dozens of years which had a bad impact on her sanity.

Valern's father found the crystal by a coincidence when mining the very same place after it got reopened. Before he died, he gave the crystal to Valern who discovered Anika to be inside the crystal for his whole life.

Anika lacks any physical form and only the wearer of the crystal can see and hear her. Her shape is glitchy and inconsistent. She is honest, chatty and optimistic in her spirit and also very intelligent. On the other hand, she is mad and emotional. 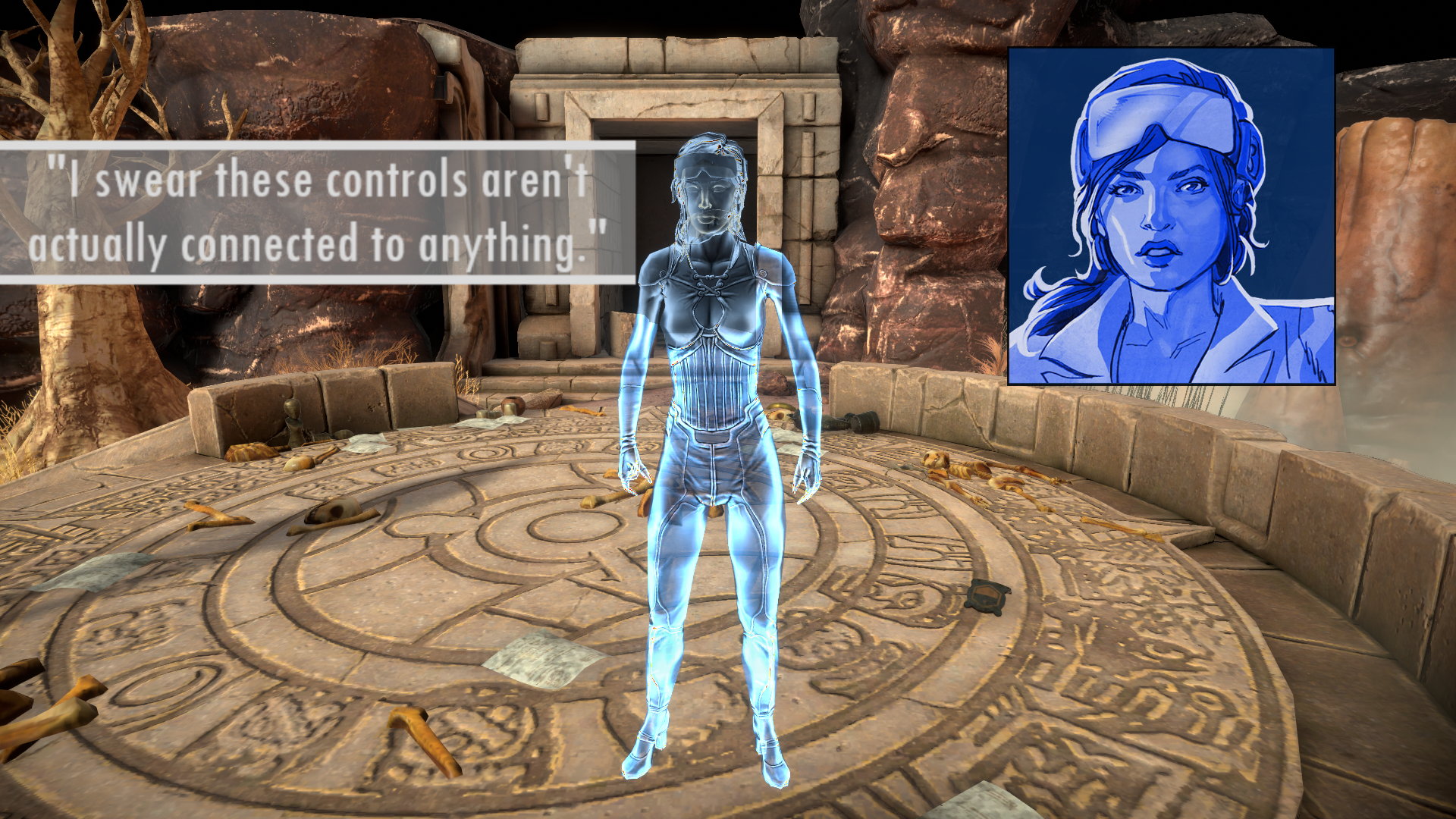 A little bit of science fiction, sarcasm & rasta style and what you get is this Augmented Drunk. Despite his unconventional charm, Breg is a respected hero. He and Mab Mab fought for independence of Rab from the Union's grip many years ago.

If only he cared for his personal hygiene at least half as much as for his own people, it would be better for everyone. Over many years, his hair and beard intertwined into one solid structure. No wonder all barbers are running away from him the second they spot him. 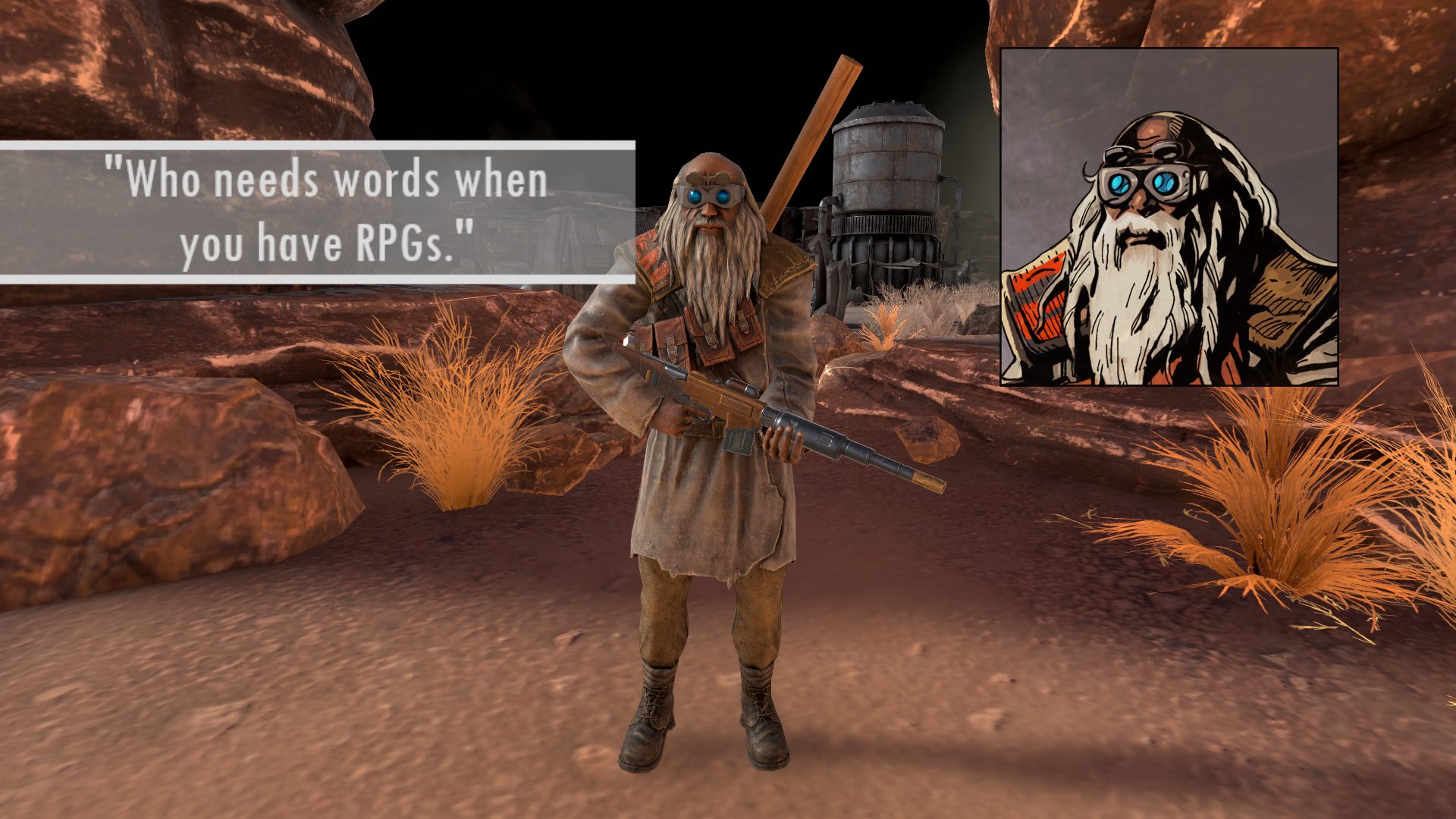 Mab Mab, a member of an alien race called Verians is the leader of a local tribe and a chief of the Rab. He was born in one of independent tribes here on Deleon. His youth was tough, but he was free. He lived by trading, resource mining and also as a shepherd. Due to recent tribal wars, many leaders and successors fell and Mab became a tribe leader in the age of 48. He is aware of the situation in Rab, but he lacks the courage to make hard decisions and lead his people towards the brighter future. 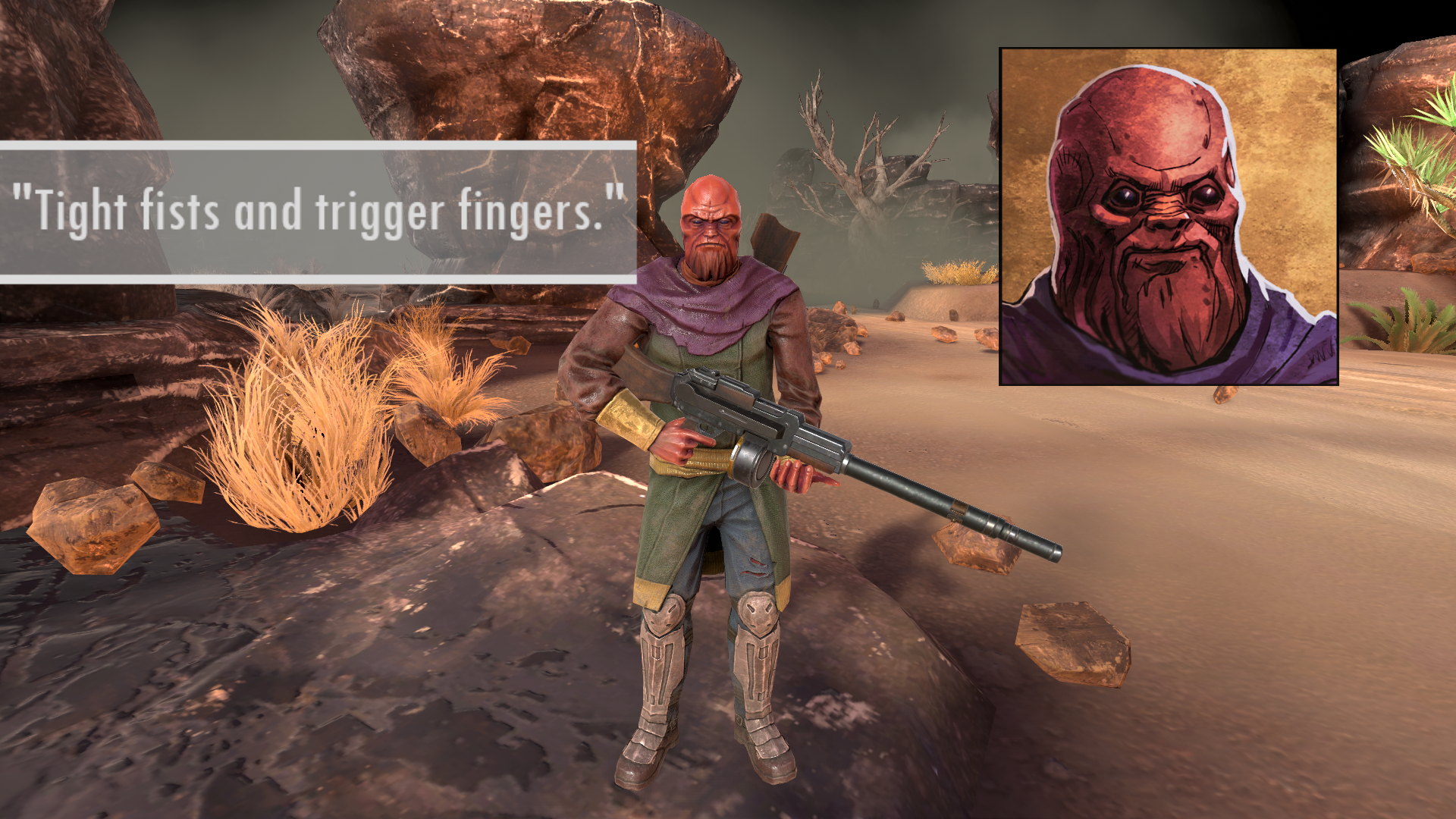 Tirell as one of the few members of a rebel uprising has completed the Noar training program of the Union Army and attended many military operations under the Union in the border zone.

As a member of special forces he was also deployed on a territory of the Ecomants. Afterwards, he served as a protector of scientific expeditions in the Gray Zone.

During one of his missions, he witnessed experiments with an unknown substance on miners which was the breaking point of his opinion towards the Union. He decided to leave the army and has joined the rebels few weeks later. 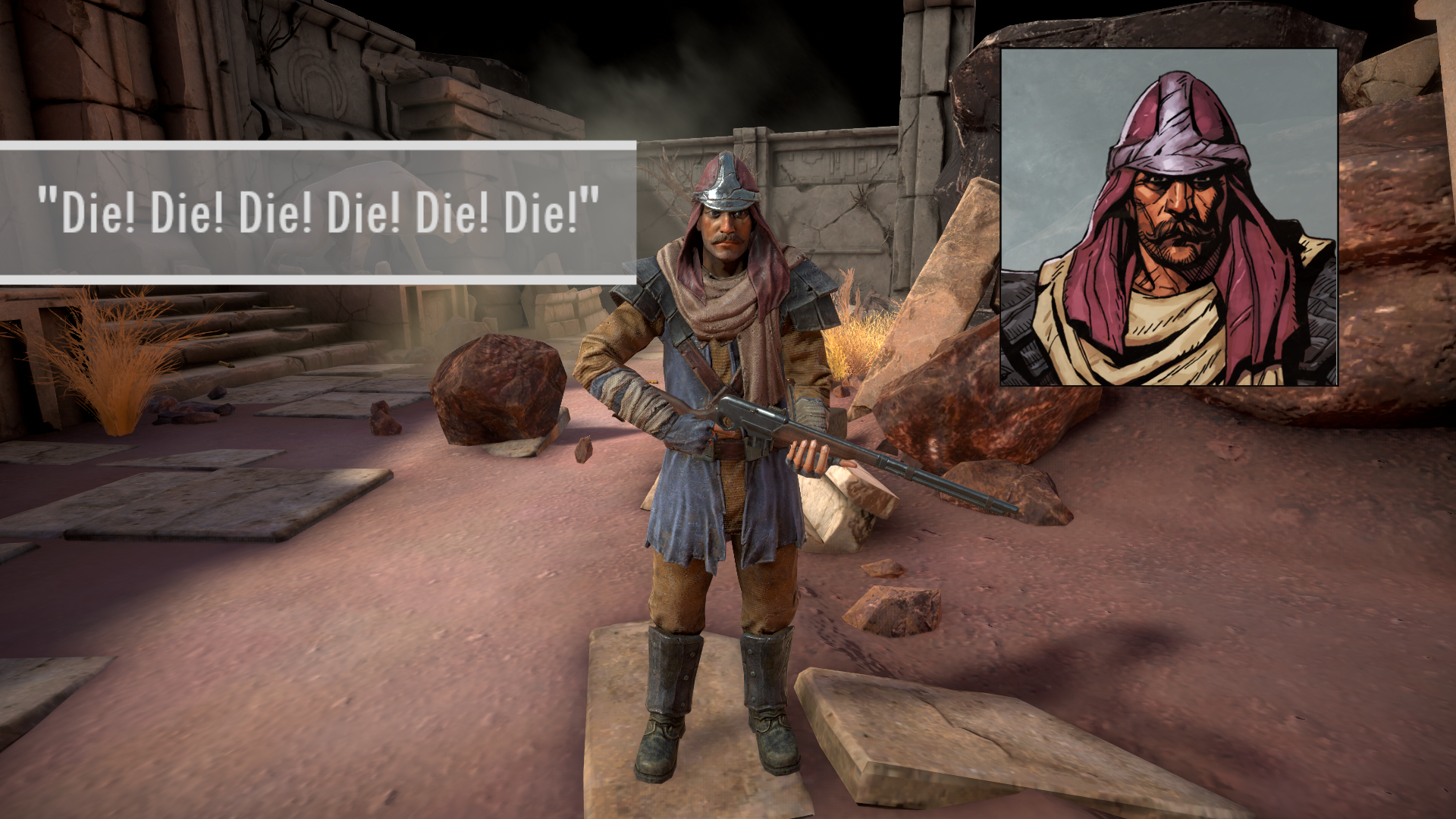 Torr is the foreman of the miners in Rab. He is one huge mountain of muscles. Rich in body mass, but with fairly simple intellect so better not piss him off, as he can get mad pretty easily. After all, he is a fair and nice guy if you are on a good terms with him. Whenever there is a conflict and Torr is somehow involved, you want to be on his side.

He wears mining goggles, a jumpsuit & a pair of heavy mining boots. He also have a bunch of rags wrapped around his arms and a tattoo over his left shoulder. 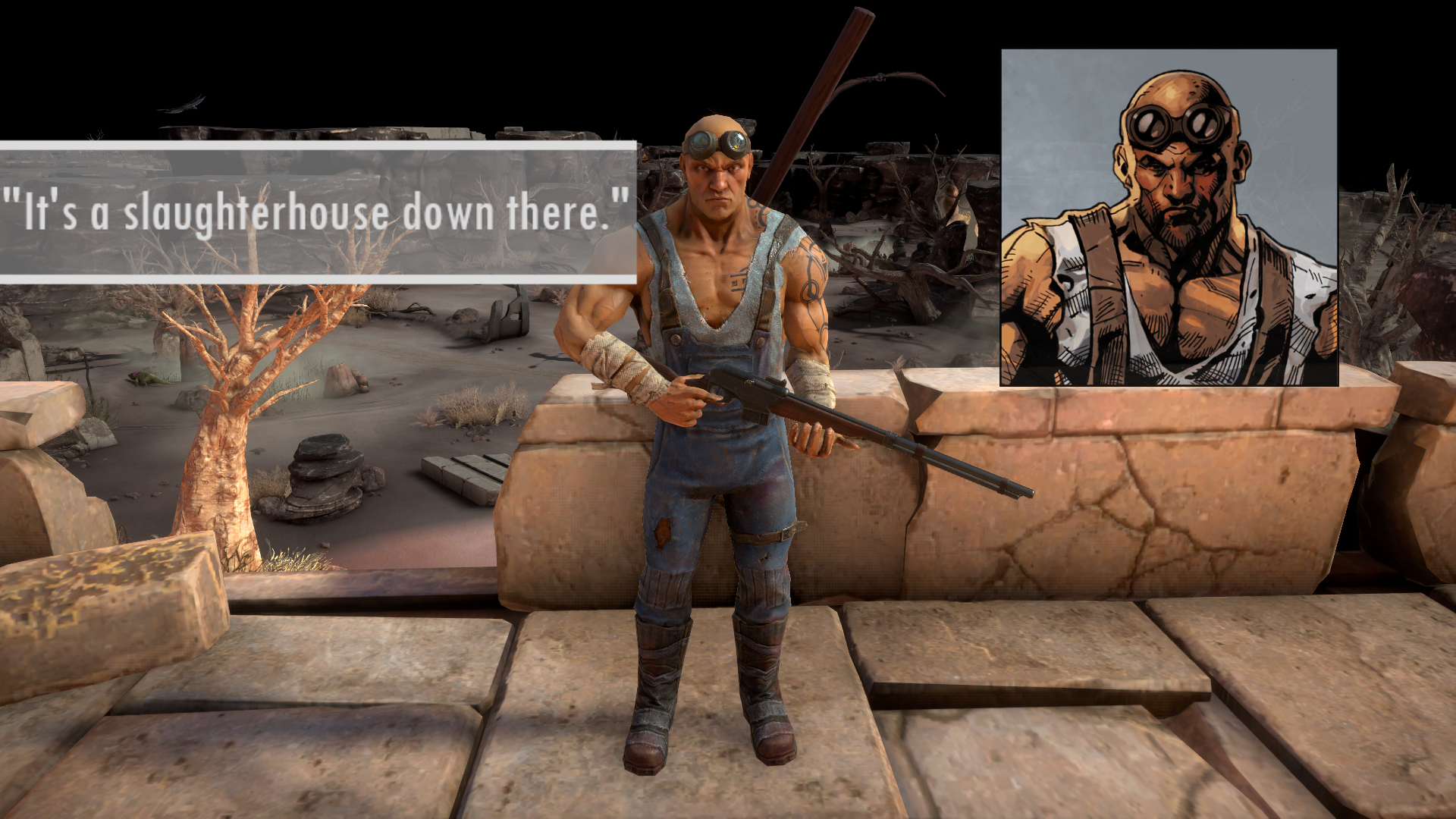 Xeen got into the ranks of the Rebellion by an accident. She worked as a freelance mechanical engineer on Deleon for quite some time. She gave herself a nickname "Steppe Wolf" and is infamous for the jokes she pulled against all sides of the conflict if they ever crossed her road.

The main reason for joining the Rebellion was a possibility of a governmental change on Deleon. The Union issued an arrest warrant for her after stealing electronics from several vehicles that the army had stored in "her hunting grounds".

There is not much else known about her. She is a wanderer. Her stupid pranks, traps and cat & mouse hunts with Union patrols are a great morale booster among the Rebels' ranks. Consequently, Xeen has earned her respect and popularity. 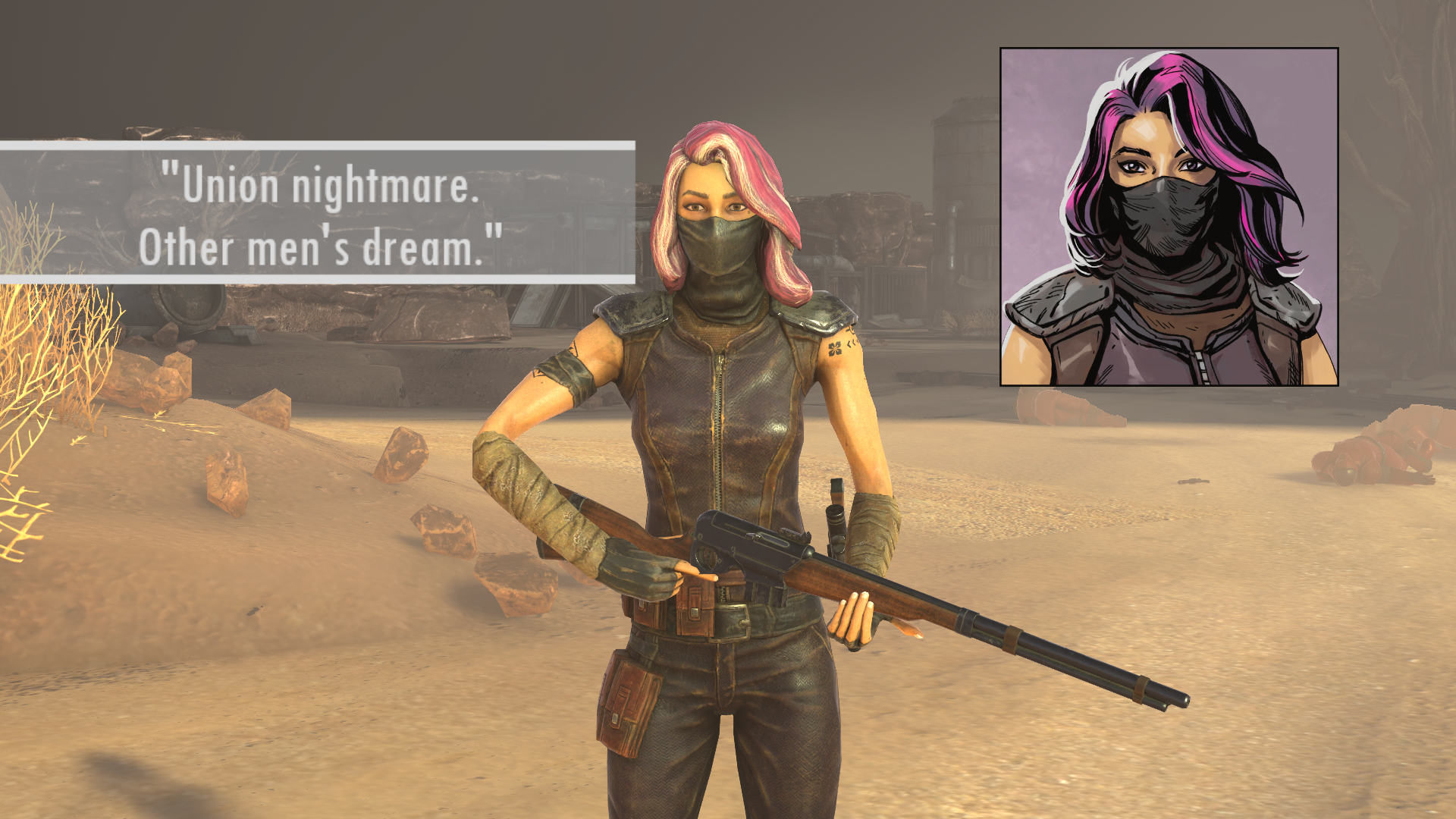