Aided by voices in your head, escape a South African mental asylum in this bizarre, high-intensity, survival-horror game. 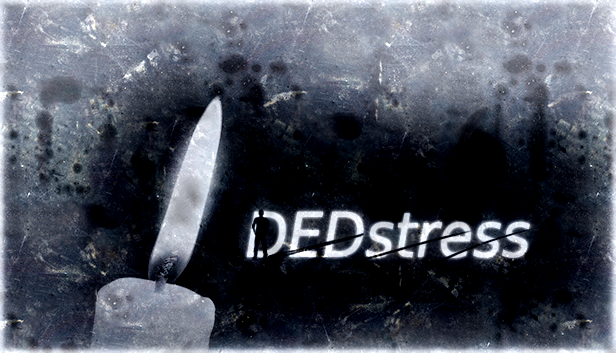 The Idaho-based South African two brother team (Kevin Stark and Daniel Manthe) at 3StrakGames have been working on a successor to their short game-jam DIDstress, which gained rapid popularity in 2019. This successor, called DEDstress, takes all of the things people enjoyed about DIDstress and expands upon those ideas to create a full 3-5 hour long intense experience which leaves players' hearts racing. DEDstress is set to be released on Steam in Summer 2020.

3StrakGames took a break from their main project to participate in a 3 day game jam, making DIDstress, which was released on itch.io for free last year. DIDstress was a weird, but intense, survival-horror game where (aided by the voices in his head) the protagonist had to find his way out of a South African mental hospital while being chased by a crazy doctor. The game was made for fun, and the only intended audience was their friends, so the team was surprised at the game's popularity; being at the top of a handful of categories on itch.io for a few weeks.

Kevin, the artist of the team commented, "DEDstress wouldn't exist if it wasn't for my amazing streamer friend Uniqopian. I had casually told her about the little game I made for my friends, and she asked if she could try it out on stream, as well as stick it up on Itch.io for her viewers. The public was never really meant to see DIDstress."

Many YouTubers played DIDstress, including some hugely popular ones like Markiplier, Jacksepticeye and Kubz Scouts. The duo was inspired, and decided to pause production on their puzzle game, Bloat, to start fleshing out the rough game-jam into what would later become DEDstress.

"We hadn't played many horror games prior to releasing DIDstress, which is probably why it's so strange and unique. We're not fans of scripted, cheap jump scares, so we found other ways to organically get the players' hearts pounding." said Daniel.

The gameplay in DEDstress is similar to Alien Isolation and Outlast's Whistle Blower DLC, but the wacky characters, voice-acting, and story line really make this oddball game stand out. DEDstress is primarily voice-acted in English, but it has in it a range of different South African accents, with strange jargon and Afrikaans (one of South Africa's many languages) words mixed into the sentences.

"If you're confused, that's ok, DEDstress is supposed to be confusing." said Kevin. The team watched hundreds of playthroughs of DIDstress on YouTube, and concluded that the less people understood about what was going on, the more fun they seemed to have. This probably explained the massive number of Japanese players who loved the game.

While it's not really a puzzle game, you will have to remember codes and solve a few mild puzzles in very intense situations to get through this game. It will test your patience, wits and sanity, so don't play this game when you're trying to wind down after a stressful day.