Welcome to my series of features covering the heroes of Arelite Core. This time, it's on to Baeme, who is Karden's best friend and also acts as a bit of a comic relief, a clear contrast to Karden's serious demeanor.

Posted by dragonslumber on Aug 4th, 2015

Welcome to my series of features covering the heroes of Arelite Core. Last time, I discussed at length about how Karden, the main protagonist for the game, was designed. This time, it's on to Baeme, who is Karden's best friend and also acts as a bit of a comic relief, a clear contrast to Karden's serious demeanor.

From the onset, I knew that I wanted to have Karden set out on an adventure with a companion. Having a second character to interact with would make it easier to banter and keep things interesting for everyone involved. Since Karden was a strong, hard hitting character, Baeme would instead be a quicker, more agile character. And, because Karden is a master blacksmith, it made sense to make Baeme a younger blacksmith, struggling to learn the craft and who would first learn from his master, then move away towards his own path. To complement Karden's battle hammer weapon, Baeme would have two smaller hammers, one in each hand, and strike with them rapidly.

As the story evolved, I found Baeme's motivations to be less interesting than I'd hope. The apprentice blacksmith felt too much of a cliché and I wasn't satisfied with his evolution as a character throughout the story. About halfway throughout the game, Baeme would have an epiphany and decide that smithing wasn't for him, instead turning into an engineer because he had an affinity for machines. 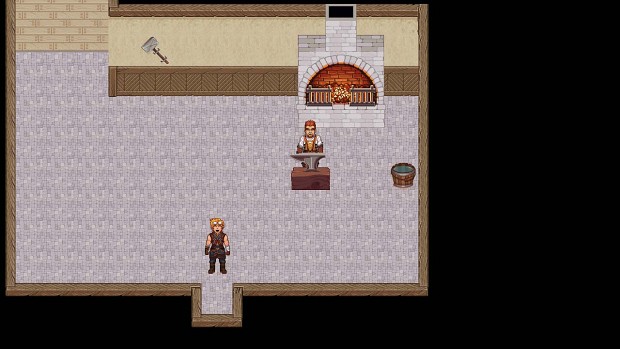 Baeme and Karden laughing together

So, rather than have him change into an engineer as a turning point, Baeme became an engineer from the onset of the story. It separated Karden and Baeme in terms of motivation, which in turn gave Baeme a new perspective in the story, since he no longer was a lesser version of Karden. In this new dynamic Karden remained the courageous and mature leader, but Baeme was choosing to follow rather than feeling obligated to do so.

Regardless of the Baeme's class, his personality was immediately set: I wanted him to be the “goofy engineer”, the jovial, sarcastic character which often appears in space sagas. He's loud, smart and sarcastic, which made him one of the most interesting character designs for me. And having that type of character definitely paid off as Baeme shines in every scene in which he's a part of. In many ways, Baeme is the closest character to me and because my style of humor tends to be more about reacting to the world around me, I was able to bring that out of him. I find that humor is difficult to convey in games and is very hit and miss, but I think that Baeme does a great job at it exactly because it was me speaking through him rather than simly giving him lines and hoping that they land. Thus far, people have reacted very positively to him as well. 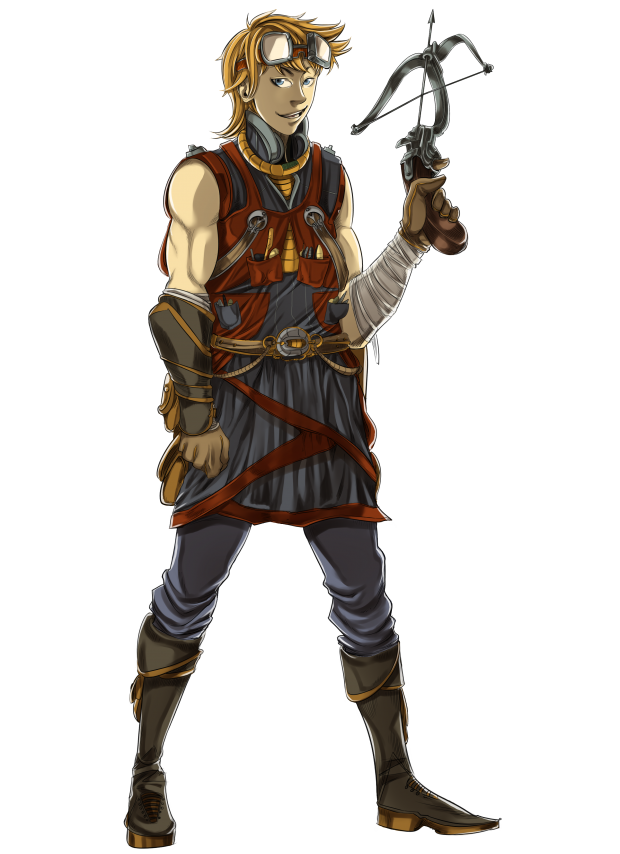 Out of every character in the game, including low end NPCs, Baeme was the toughest to name and I must admit that I'm not entirely satisfied with the final choice. For the longest time, his official name was Jaemon, which is also how he's named in the code and files for the game, but I always knew that it wouldn't be satisfying. So I started looking for other names, specifically names starting with a letter I wasn't using yet. A lot of W names came out, Walter, Walland, Walt, some Rs like Reit and Rhyss, but nothing was sticking to him. In desperation, because I needed to finalise some documents, I finally decided on Baeme.

Other than because it starts with a B, Baeme was choosen because of “beam”, which I felt represented him well as an engineer. It had a bit of a technological flair. I also liked how the name pops, it's very explosive and fun, especially with the B sound. In all, even if the name isn't my favorite, I do feel that it fits the character to a tee. And besides, I figured that if players didn't like his name, they always had the option to change it in game. 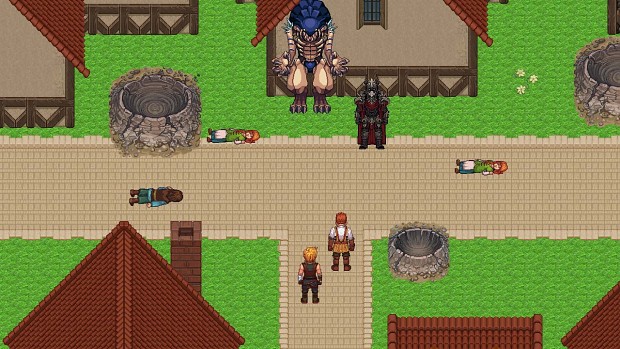 As previously mentioned, Baeme was meant to contrast Karden in every way, especially when it came to combat. Where Karden was hard hitting, Baeme would instead be more about speed, act more quickly and be able to take turns faster. That meant that he could be more responsive to the opponent's attacks and use healing items to get the other heroes out of tight spots. He even has a special move which attacks instantly, giving him the opportunity to take a second action immediately.

However, Baeme really only came together as a battle character once the combo system was implemented, since it gave him a unique supporting role in the party. Now, some of his special moves would be set up to deal a large amount of hits to the opponent, to increase the combo and let Karden cash in the damage. Suddenly, the heroes were no longer just choosing their best actions individually, but were acting together to really unleash the most damaging moves. In this case, adding a game mechanic made this battle average character stand out. 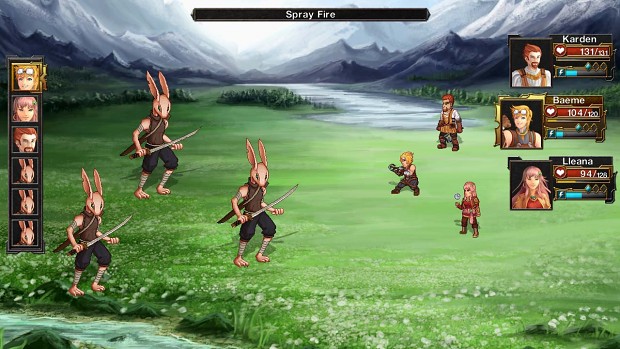 Baeme is a fun, lovable character, probably one of my favorite JRPG characters because there isn't that many jovial but sarcastic characters in those types of games. It's just not a part of japanese culture. And really that's what my whole approach with Arelite Core has been, to take what I felt was the best from traditional JRPGs and leave what I don't like or what has become cliché on the cutting room floor.

Next week it's on to the first woman of the group, a spacii named Lleana. Because she's of a different species, Lleana was instrumental in figuring out what it meant to be a spacii and how the world reacts to them. It also gave me an opportunity to write a female character which I would find interesting and unique. I hope you'll enjoy discovering her.