Discussing some of the thinking that went into the designs of the enemies in the game.

Having asylum staff as the enemies seemed like an obvious choice since the game is about trying to escape an asylum. This basic decision was very intuitive, but a lot of thought went into the details of the enemies themselves.

Most of the enemies in the game are very distinctive in their appearance. They're all stylized to one extent or another. The most obvious reason for this is that I didn't want them to be boring to look at and that's the kind of style that I personally like. But there was also another, more technical reason for their somewhat cartoony appearance.

Due to the limitations of the technology that we were using and the fact that we wanted this game to be able to run on as many different types of hardware as we reasonably could, it was important that we kept the complexity of the 3D models to a certain minimum. Basically we couldn't make the characters too complex looking or it would slow down the game too much on too many people's machines. Keep in mind that we're a two man team and lacked many of the resources that an AAA title would have to go through and completely optimize their game.

In a situation like this, where you have a fairly low cap on the amount of geometry that you can include in a single character, it's best to go with a stylized look. Trying to go with something realistic would be folly under these circumstances since it couldn't really be achieved anyway and trying would just make the characters look even worse. Fortunately, the stylized look is what I wanted anyway and it works well with the other weirdness of the game.

I would say that the biggest single influence on the visual design of the enemies of the game is Gary Larson's The Far Side. This is probably most obvious with the enemy nurses, as she is very heavily based on the general look of Larson's women. 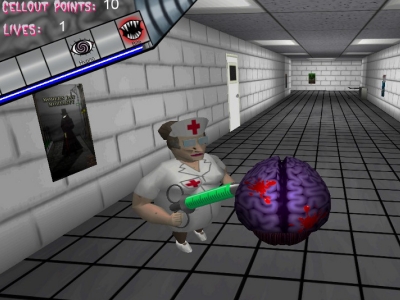 Of course one of the biggest influences on the style of the game's characters is just what I like and what comes naturally to me. Since I was responsible for creating the look of this entire world and was the sole artist on the project, I thought that the best way to make sure it was consistent was to just do what I intuitively felt would work best.

It was important that the characters work well with the world and share some of the same weird style as the environment and of course as the protagonist, Twisty. And since one of the other goals of this game is to promote the Twisted Jenius web site, I was also inclined to borrow certain ideas from that. In the case of designing the enemy characters, that usually meant taking some cues from my other somewhat cartoony work, my Villains & Heroes webcomic. If you look closely you'll notice that there is some minor overlap between certain features of the characters in the comic and in the game.