The 0.10 update of Orkward introduced vibrant jazzy soundtrack to the game. In this devlog, I'll discuss how I worked with composer and musician Drew Twyman to produce the game's music.

Hello! I'm Joe, and I'm making Orkward: the space ork dating game. Yep, I'm still here! In this week's update, I'll be talking about the game's soundtrack, which was added to the game back in 0.10. I'll be discussing why I added music, why I went bespoke, and the process of working with the wonderful Drew Twyman to give the game its signature sound.

I am at my happiest when I'm working on the gamedev I don't actually do myself.

While I enjoy writing and coding, at this stage in the game's production, they're really, really hard jobs. Keeping all the strands in my head is almost impossible. And how do you know when something you've written is good enough? Funny enough? And I still haven't really work out how to make the game layout work in the itch.io embedded player on all possible screen sizes. I mean, who wants to solve a problem like that?

On the other hand, working with an artist on the game's visuals was a pleasure (I've already devlogged about that). Similarly, producing the soundtrack has also been an absolute joy - which is why I'm blathering on about it now.

My original plans for Orkward didn't involve any sound at all, so I owe a great debt to my playtesters - shoutout to MrZany and the Fishing Cactus Discord here - for giving me the idea. As soon as they suggested adding some sound I was all in. Of course Orkward needed a soundtrack.

I instantly knew what my options were. I could do the obvious thing and plug in some kind of heavy metal - something loud, brash and orky. Or I could be bold and give the game a drastically different feel by turning to jazz.

If I was the kind of guy who liked obvious and safe, I wouldn't be making a space ork dating game. I like the other thing.

I wanted the jazz of a double bass crying. The jazz of a piano calling to the endless darkness. The jazz film noir, of dive bars, or private-eyes and endless rain and dishevelled city streets. Jazz that struts, jazz that swaggers, jazz with a score to settle.

I knew that kind of jazz would bring the game to life - if only I could find it.

I knew exactly what I wanted: a main theme tune, heavy on bass with maybe a tinkling of keys, accompanied with a unique theme tune for every ork. Each track had to loop in the background - so tracks couldn't be too short, else they'd drive players mad, and couldn't be too shouty, else players wouldn't be able to concentrate on the text.

I kicked off a search for those perfect tracks. I explored YouTube and Tidal to find songs like the songs I wanted. I attacked the Free Music Archive, I mined Freesounds. I trawled through over 3000 jazz tracks.

And I didn't even come close.

A lot of the sounds just weren't what I was looking for. A significant percentage of them were - and I'm sorry to say this - just awful. Do you have any idea what Noise Jazz is? Listen friend, I'm gonna give you this one for free : don't look up noise jazz.

Nothing sounded right. It was all too jazzy or not jazzy enough; too cheap or too expensive; too ambient or too smooth; too much aaaargh and not enough waaargh.

After actual days of searching, my mind rapidly unravelling, I came to the conclusion that the only way to get the sound I wanted was to pay for it myself.

Luckily for me, I knew a guy. A contact from a mis-spent former life. Someone who knew the blues, who knew comedy. Someone who was just starting out producing music for TV and radio. Someone I could afford.

That someone was Drew Twyman. 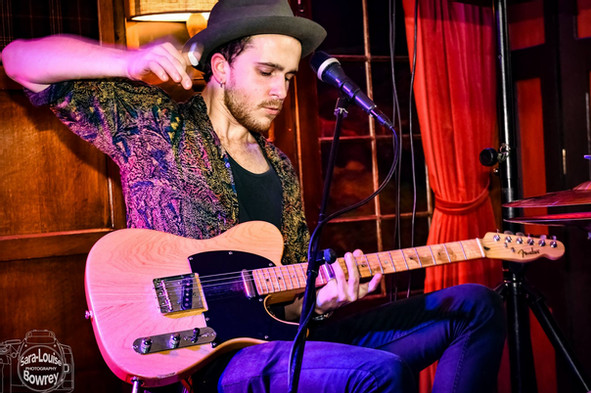 Turns out, producing a soundtrack is really hard.

I am not musical. I love music - absolutely live for it - but I can't pluck, sing, strum, bow, bash or hum a note. So to translate a sound in my head to something that another human can understand is, well, torturous.

To help get poor Drew into the mindset of what I wanted, I produced a 1500 word document with phrases like "I'm looking for something that struts like an angry ork" or "Can I get something like Tom Waits howling into a whiskey?".

I dropped him YouTube videos and said rubbish like "I want this intro but less shouty and more peppy", or "I'm looking for this but with totally different instruments." Despite knowing what I wanted - and knowing it existed - I couldn't actually name a single track which sounded just right.

Somehow, Drew was able to see through my ramblings and deliver me a short sample track. After about a week, he sent me this - which is basically several 28-second repeats of the same melody in different arrangements.

Even now, I can't play that piece of music back without grinning from ear to ear. Drew had abso-ruddy-lutely nailed the sound I wanted. There's just something very orky about that plodding bass, and the keys still give me the chills. You can still hear a lot of the final main theme in that sample.

This was a great starting point - but boy did we have a long way to go.

Next, we had to convert that sample into six distinct tracks: one main theme, plus a track per dateable ork.

Drew's sample gave us something to work from, so I could reference time signatures and instruments in it. We worked out a structure of a, A and B sections - where the A is the main melody for the track with a full arrangement, the a is a stripped-back version of the same, and the B is a different movement entirely.

That gave each track a structure that works well for looping. It fades in and out, it changes a bit, it repeats a strong melody but only about once a minute.

Each ork would play on that melody and structure. Chompa, the barman, leaned into the jazzy piano in a glorious saloon-bar ragtime number. This was so good I actually wrote a pianist into the game. Krugg, the mechanic, had a more industrial feel, metallic and tinny. Wendy, the hunter, swung in a more western direction, with slide guitar and a howling wind.

For each track, Drew would take my rambling words, produce an A section for me, and we'd iterate on that - tweaking arrangements and moods. Some orks, like Skullkrusha and Sharptoof, took quite a long time to get right.

One thing I particularly struggled with when hearing Drew's samples was that they were just so good. He'd send a track, I'd listen and utterly love it. To try and critically analyse how that might sound in the game, and whether it was hitting the right notes, was really, really hard.

We also had to move away from the pure jazz sound that I first envisaged for the game. This took some time to accept. Don't get me wrong, I'm delighted with what we've ended up with. There's a jazziness to all of them still - aside from Skullkrusha, where we wanted a strong sense of rage and we fell back to something a bit more metal. The final soundtrack has a lot more diversity than I first imagined - and of that means stepping away from the noir-jazz that I first dreamed of.

But in the end, this is absolutely to the game's credit. It wouldn't work any other way and I have to thank Drew for pulling it all together into a cohesive hole. This could have easily gone so, so wrong.

Adding music to the game brought so much goodness. Suddenly it felt like a sitcom - and I know that sounds kind of horrible (I hate writing it, actually), but it feels absolutely right. Without being funny, the music sets the tone for comedy. The juxtaposition of that classy jazz against the brutishness of the orks is just *chef's kiss* everything I hoped for and more.

And yet, and yet. Six tracks wasn't enough. The game has five endings - some good, some bad - and it just wasn't right to let the same music roll over the credits. So then we needed two more tracks to see the game out. I'm really pleased we did this because it meant we could introduce a little kazoo - here's the good ending track, which makes me smile every damn time:

But we still weren't done. I needed sound effects - something to play when you hit a button, or unlock a trophy, or get killed. The game sounded hollow without them. So back I went to Drew to get a bunch of short samples to play over the top of the tracks.

It's taken about two months of back and forth to get the soundtrack of the game right. It's taken a lot of my time to manage the project. And I won't lie, it's been expensive to finance.

But it's been worth every penny. It helped me get excited about the game again. It helped a musician pay the rent through the coronavirus crisis. And, most importantly of all, it made Orkward a better, more cohesive, experience.

On that note, I'm gonna swing out of here, spin up Tom Waits, pour out a stiff melody and find a moon to howl at.