World In Danger is an in-development 2D retro action/stealth game. This article showcases the two different approaches the player can take on the same mission; essentially choosing themselves if they want to play an action shooter, or a stealth sneaking game.

World In Danger. A recently revealed, currently in-development 2D retro styled action/stealth game for PC, Mac and mobile platforms. A solid top-down shooter, with tough enemies sending hails of bullets your way… That is, if you want it to be.
Taking a cue from the Metal Gear Solid playbook, the player has a choice in how to handle certain missions. Be like a ghost, unseen and non-lethal. Or go in there and doing your best Rambo impression, machinegun in tow, raining hot lead down upon your foes.

Choosing from the available characters, the ninja seems the obvious choice for a stealth approach. Not only does he have a pretty fast movement speed, he also has a special “flashstep” ability (instead of a primary weapon); Which not only provides a short speed boost, but also provide a short period of invisibility.

The demonstration doesn’t go without a hitch. At several points the player is seen by the enemy, but fortunately, is able to move out of sight before the enemy(ies) open fire. This is also represented in the mission ranking. Scoring nearly perfect on all accounts, only loosing some points on the stealth ranking. The playthrough still nets a sold A-rank and 400 points. 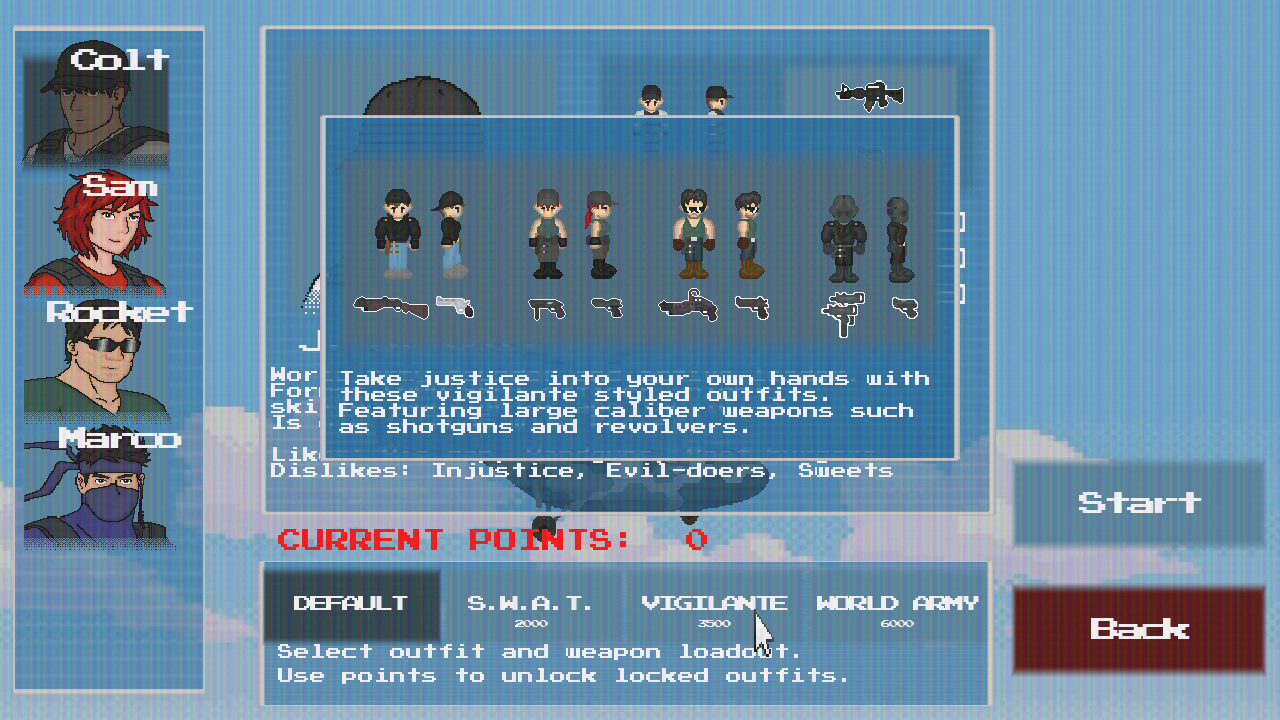 Points you earn from mission can be used to unlock different outfits and loadouts for the four main characters. Luckily, unlocking it a set counts for all four characters.

Let’s have a look at the alternate approach.

Who better to use when acting like Rambo, but the big burly guy with the machine gun. Despites his lower movement speed, he still gets hit only a few times by enemy fire. The mission is a lot more action packed and a lot louder. Enemies never seen in the previous video, all come running onto the scene because they can hear the gunfire and come to investigate.

With all the death and carnage left in the wake of mission playthrough, the ranking as taken a beating. While scoring a perfect S-rank for the swift mission time, the stealth and kills score are both a lowly E-rank. Earning the total rank of D and only a 100 points.

Like Metal Gear Solid, the non-lethal approach is rewarded with the highest rank. This however only applies during World In Danger’s hostage rescue or bomb disposal missions. During enemy elimination or boss fights, getting the best rank requires the player to take no damage and finish the mission as fast as possible. 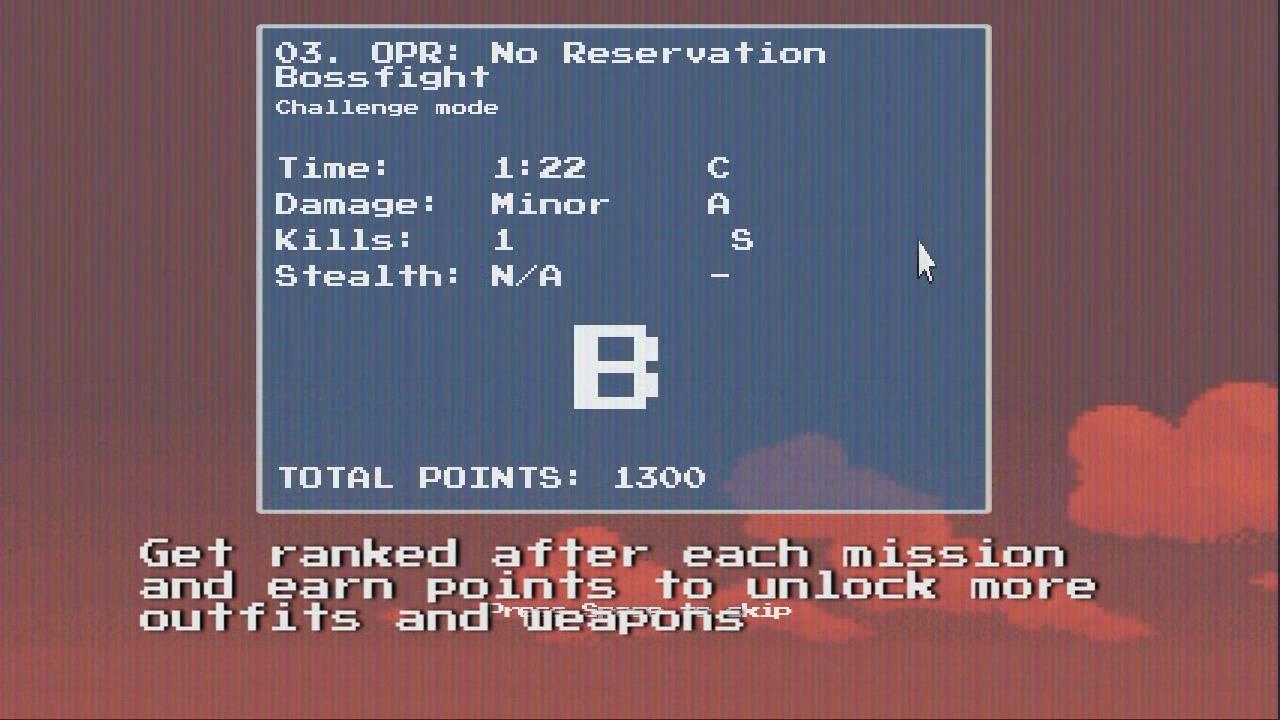 World In Danger has a PC demo version available for the public. While still an alpha build, a lot of fun to play. Check out the details below.

A demo version of the game has been released for PC. I'm in need of some general feedback about what you think about the game. Is it to hard, or to easy? stuff like that. But most importantly, is it fun to play?

Please download the demo and leave your feedback at any of the following mediums.

Play through the first few levels of the game, including the first boss fight and an optional (but recommended) tutorial. It also includes the full version of free roam mode, where you can explore the World Army's base of operations and meet the crew working there. And the custom mission mode, where you can select any of the available levels and customize your own mission.

NOTICE!
Keep in mind, this is still an early version of the game. Errors and bugs can be present. Music aside from the main theme is subject to change, as is the majority of the sound effects. If you do come across any bugs or errors, please let me know, e-mail me at josploegmakers@coltgames.com

I love the possibility of choice plus customization. HOWEVER, there are afew things I have issues with:
1. The Sight range can be hard to tell, I had moments in Mission two where I got spotted because I couldn't see enemy line of sight.
2. A scouting mode could be a nice addition (Not necessary but nice). It pays to see where enemies are, but it's not necessary, as one can guess where they are from sightlines.
3. Awwww comon no bathroom shenanigans? I understand, but as a MGS fan... I kinda want.
4. Normally the enemy can't see past terrain, however in the second mission a guy noticed missing hostages, FROM BEHIND THE WALL. X-ray vision XD

Also, is the World Army a nicer form of MSF/Outer Haven? After all, they are all non-politically aligned Nations.

Thanks for playing and commenting.

About your concerns:
1. I'm going to include an option to increase the visibility of the line of sight in the options menu (similar to the already present HUD transparency option). The current setting is very low, as per my own preference. I wanted it to be hard to see the vision cones; to make both the stealth harder (the players has to pay attention) and to not obstruct the levels themselves.
But the player should have a choice in the matter; and I'd like to make it possible for people with difficulty seeing colors, to also be able to play the game.

2. With scouting mode, do you mean the same way as in "Pillars of Eternity"? That's the only "scouting mode" that comes to mind. How exactly did you imagine it to work?

3. I know, there is still room for funny jokes like that. I'll leave the easter egg/hidden content adding for a later stage of the development.
In the meantime, check out the freeroam mode. On the left side of the main building, there is a guy with binoculars who definitely ISN'T peeking into the women's bathroom; He'll tell you that himself.
(Tip: get to close to him and he'll stop looking trough his binoculars, stay a little further away and he'll continue... until it becomes to much for him ;D )

4. That... Is a bug and will be fixed. Or I inadvertently created a super-soldier. Who knows :P
Is it at the start of the level? The first guy you come across after getting up the stairs from the parking lot?

And yes, in a way. A nicer version of MSF is a great way of describing it.
The World Army name I have been using in older projects and even predates MSF (honestly). But indeed, it's current iteration is similar to mainly MSF. The main difference would be that MSF was still a PMC and as such for hire, providing their services for monetary/material compensation. WA will take on missions where they are needed regardless of compensation.
That's probably why MSF had a offshore multi platform mother base, several hunderd soldiers and all the gear they need. And WA basically has a couple of large shacks on the Azores islands, a few dozen soldiers and a couple of vehicles.
If you like to know more, be sure to visit the freeroam mode, explore it and talk to the people there. It'll tell you more about the WA, the people that joined up. And there are a couple of references to MGS hidden in there as well.

Again, thanks for playing and commenting. It is very much appreciated. It'll help me make the final game a lot better.