In this devblog, we'll take a look at how ships and weapons function in general.

We have looked at the Flagship and Submarine mechanics in two previous blogs, now let’s take a look at the current plans for Ships in general. I’ll be going over ships in general first, and then do Capital ships, since they differ from the others in several significant ways, and since we’ve already covered Subs and Flagships, we’ll skip those entirely. Also, Abilities and Upgrades warrant their own dev blog, I think, so I won’t go into detail about those here either. 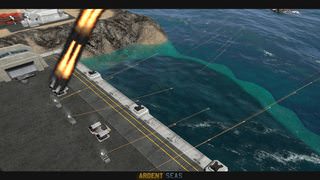 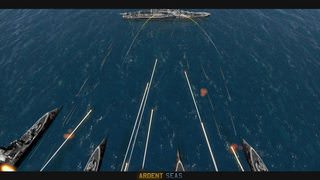 In addition to Armor, Human ships have close-in weapon systems, which can destroy incoming missiles, and various forms of countermeasures, like flares, ECM, and also smokescreens. Most ravager ships lack CIWS, although some of the larger ones do have them, but they only work when the shield is down. Countermeasures generally try to spoof missiles, so that they will not hit their intended target, or in the case of smoke screens, prevent being attacked in the first place. 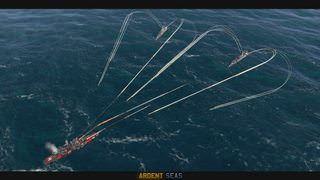 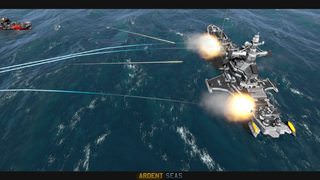 Each faction uses these differently. The Tenorran Defense Navy primarily use missiles to attack from afar, and guns to defend themselves should an enemy get too close for comfort, which would be the specialty of the Coalition Navy, with their well armored ships, they drive right up to the enemy, and attack using a plethora of cannons, with missiles as backup. The Ravagers also typically fight at very close range, using beam cannons and swarms of missiles. The Ravagers and the CN both use explosive mines, while the TDN use Torpedo Mines, which fire a single torpedo upwards at a target when it passes overhead.
Many ships also have extra point defense cannons, that will automatically fire at any nearby enemies. Not particularly powerful, but it is enough to dissuade any pesky corvettes from hanging around for too long. These are mostly instant hit weapons. 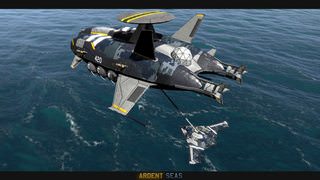 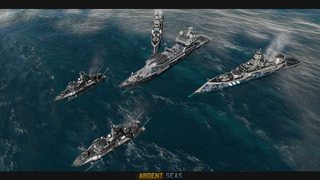 Most units, except capitals and ravager ships, require Fuel to run. If a ship runs out of fuel, it becomes immobilized, and can no longer use its abilities, but it can continue to fire normally. Fuel is produced from Hydrocarbons, mined offshore by each faction’s respective mining unit, and distributed via replenishment vessels, flying tankers, and by carriers to aircraft being serviced by them.

The Ravagers have Bandwidth instead of Fuel. The Flagship, and Auxiliary Command Ships, provide Bandwidth, which acts pretty much like Power does in CnC. If your bandwidth is exceeded, units shut down. But it is possible to disable units, to free up bandwidth, and if you’ve reached the current bandwidth limit, new units aren’t deployed.

Weapons require Ammunition to fire, as with Fuel, it is supplied by Replenishment ships and Carriers, but not by flying tankers, to human ships, while Ravager ships’ ammo regenerates over time, although being near specific units, like the Flagships, speeds up the regeneration considerably. 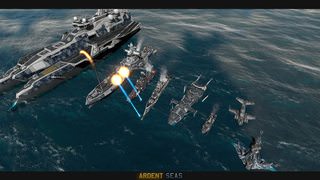 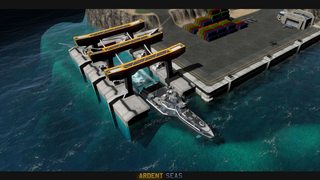 The ships of the Tenorran Defense Navy and Coalition Navy are usually built in shipyards, and often need to be researched before becoming available, while those of the Ravagers are dropped from orbit, and require the relevant data relays on the Flagship. Ships come in 4 size classes, each with a general set of strengths and weaknesses:

Moving a ship is pretty straight forward: Select a ship or ships, and right-click where you want it or them to go. It’s also possible to create waypoint paths, if you don’t want units to take the direct route, or order them to patrol an area.
Attack Move orders units to move to a location, and attack any enemies they come across on their way there.
Ram, as the name implies, orders a unit to Ram a target, instead of trying to avoid colliding with enemies. Also makes the unit slightly faster.
Reverse makes ships move in reverse. 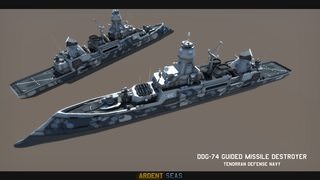 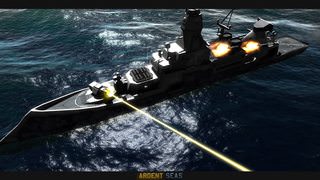 As an example, I’ll use the Destroyer.
The Guided Missile Destroyer of the Tenorran Defense Navy is a medium-sized warship, and essentially the main warship of the fleet. It’s available as soon as the Medium Shipyard has been researched, and is armed with 4 quad anti-ship missile launchers a 32-cell Vertical Launch System, and a gun turret.

The Destroyer also has a Helipad, where Helicopters and small VTOLs can set down to refuel and rearm, such as a submarine hunting helicopter.
Also, it can be upgraded, either with Railguns or Particle Cannons to replace the regular gun turret, with Long range missiles, or heavy missiles, for more range or more firepower, and its CIWS is affected by the global Laser CIWS upgrade.

Unlike other ships, Capital ships have a build limit, the Flagships of course don’t count towards that limit. Small-Large ships have no pop-cap. Capitals also aren’t built, instead they come in from the edge of the map, and don’t use fuel or ammo themselves, but for instance the Supercarrier needs Fuel and Ammo to maintain its air group.

It is very hard to kill a capital ship, though they are rather slow, they are disproportionately well armored, and their sheer size alone makes it hard to pick them apart.

I think this covers all the basics for now. Let us know what you think on Twitter @ArdentSeas, on our Facebook page, in the comments below, or send us a PM here on IndieDB!
SargeRho, singing out!

is this a game or a mod? looks interesting