Well I understand some may consider this pretty straightforward, but others don’t. Today I want to talk (or rather, write) about characters and why this matters.

In some games, characters may not play such an important role because they may be designed to be an empty “vessel” for players to step into (I’m looking at you, Gordon Freeman… and yes, I am a Half Life fan…), but in other games characters are something more. So here I’ll leave the “empty vessel type characters” out and focus on story-driven or character-driven games.

BTW, in case you don’t know yet, I come from a filmmaking background, and all of this is based on that knowledge (or lack of, HA!). So this is pretty much the way I work (I don’t consider there’s a “right” way to build a character).

When building a character, I usually begin with some basic features (either related to personality, looks, or role in the story). Is this person friendly, shy, black haired, skinny, poor? This is used to create a very basic and shallow character profile, and also to pick a name (for example, if my character is weak, and is affected by it, I can look for a name that means “strength,” to make it ironic).

Basically, what we are now is the result of our past experiences. Some define our personality, others define physical elements (like the scar on my right hand). This is the point where I write… A LOT… because I write the character’s biography, listing any important event in that character’s life. To tell the truth some may consider this a waste of time, but it’s very interesting to see what possibilities present themselves because of this (“my character is 35, why should I care if he fell down some stairs at the age of 7?” “well maybe because that accident caused the problem with his left knee that doesn’t allow him to run for extended periods of time”)

I have to say this step is really interesting, because at first is very hard to write that biography because, up until now, you still don’t “know” your character (you know the name and some basic stuff, but that’s just the tip of the iceberg). However, the more you write the easier it is to write the rest, and then you reach the point where characters “write themselves.” Sometimes I will even jump to a specific age, and then I go back to younger ages when writing becomes easier. After all, this is a very dynamic process, so it’s not like we need to write that story in a linear way.

So why is this important? In character-driven games, all of your character’s actions or reactions are defined by who the character is. It doesn’t make sense to define at one point that the character fears guns and then see the same character pick up so many guns he becomes Rambo. It’s a stupid example, I know, but same can be said about a character that uses very complex words and grammar to communicate, just to have the same character speak like the average soldier from any mainstream shooter (F* shoot those F*ing F*s before they F*ing kill us, you mother F*er!!!)

This is also important to develop the character arc. So maybe your character fears guns at first, but goes through so many tests during the game and he realizes that “the only way I have to protect my family is to overcome my fear of guns and shoot our way to the train station.”

As an example, I will use a character from our game, Enola. Enola is very story-driven, although closer examination shows it’s actually character-driven, and it’s build around 3 different characters. One of them is a young girl named Angelica.

The first step was to figure out her basic features. She is: shy, antisocial, insecure; she’s beautiful, pale, slim, and has long blond hair; she’s 20 years old, she’s also a lesbian and currently she has a girlfriend.

For the name I chose Angelica because she’s so beautiful she looks like an angel. I made her shy and insecure so that others see her beautiful while she considers herself “non-pleasant looking.”
Then I needed a better visual connection to her because it’s hard to work with a character I don’t know. I then came to a very specific look for her (white skin, blond hair, green eyes), and a few facial references.

However Angelica is not perfect, and she has some problems I am not going to discuss here, HA!
The next step was to actually write her biography. Angelica’s profile document is around 20 pages long, and describes pretty much every important event from the day she was born to the day the game takes place, and this bio answers pretty much any question about her: Did she go to school? Why is she antisocial? Why doesn’t she consider herself beautiful? Why is she a lesbian?

More importantly, this defines the way she expresses herself in the game (for example, she will never even use the F word), and I can also use any of her background information in the game (like a conversation with her girlfriend where she mentions any specific detail about the school she attended, if any).

And, of course, helps to develop a character arc. At the end of the game, is she still insecure and shy? Is she stronger in any way?

Even if Enola is a horror game, it’s a game that focuses not only on “making players leave brown stains on their pants,” but also focuses on deliver some sort of emotional experience, so thinking of Angelica as a real person helps a great deal because I get to see everything “through her eyes” and feel “what she feels” (Enola is not a “cheap jump scare fest” so players’ pants are safe, I suppose).

Just for fun, here’s another pic: 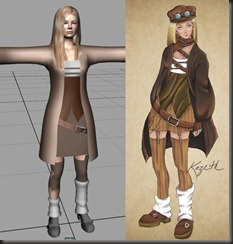 And that’s it, fellow writers (and public in general). I hope you found this blog post useful, or at least interesting. As always, you can vote for Enola on Steam Greenlight, and support the development of the game by buying the alpha.