A feature list of 001 Game Creator, what it can do, and how you can do it. 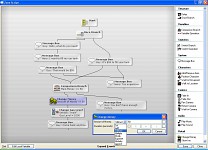 The graphical scripter within 001 Game Creator is a simple, yet powerful method of creating events for your game without the difficulty of learning to write code. It uses the simplicity of pointing and clicking to allow the user to easily implement events in the form of a flowchart. A few of the more common events include:

Random Branch
an event that will randomly select one of however many branches specified and when triggered, play the events that follow.

Walk to Location
allows the user to choose a character on the map and select a tile on the map to which the player will walk.

Message Box
brings up a message box on the screen in which users can enter text or selectable options.

Screen Pan
brings a cinematic feel to the map by panning the game camera to an allocated position on the map.

Play Effect
plays a selected effect's animation in an allocated position on the map.

Play Sound at Location
provides options in playing a sound at a specified position on the map, including position, volume and pitch.

Text Scripting is a more complex mode of scripting than the Graphical Scripting. It's harder, but if you're good at it, you'll be able to script certain things faster. It can easily be interleaved between graphical scripting nodes. 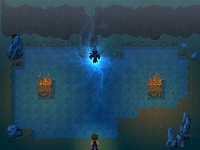 A fully editable particle effect generator, which allows you to add vibrant animation and life to your games through the alteration of shape, size and colour to your objects over time. 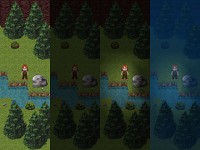 Whether you want a dark night, misty forest, or bright sunny day, the options of lighting and fog gives you the power to enhance your maps, making them more realistic, with addition to weather effects to allow alterable snow, cloud or rain effects.


Bring sound and music into your games with audio effects including layered audio, which gives you the possibility to play numerous tracks at once while positional sound, with 5.1 Surround Sound functionality gives you the freedom to place sound effects on a map, giving it audible range, pitch and volume. Supported audio file formats include: MP3, MP2, MP1, OGG, WAV, WV, AIFF, XM, IT, S3M, MOD, MTM, UMX, MO3, MIDI, WMA. 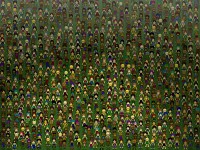 Easily customise variations of sprites, with the ability to give characters layers of clothes to wear and weapons to yield, as well as vehicles different looks and designs. Alpha transparency is fully supported, making it easy to create soft edges. 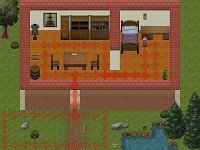 Set up a character or object's movement, with the simple to use visual route system, which creates a path that the character will follow endlessly. 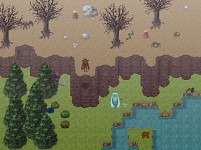 This feature allows you to give height to the map's ground in order to create multiple layers of floors that the character can walk on, which is useful for platform games. 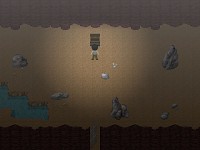 Easily create doors, treasure chests, keys and locks, and all sorts of other systems, with very little effort. No need to animate a door, including rotating, sliding, hiding, and splitting. No need to script treasure chest code, just place an item and pick a treasure chest graphic. All the tedious simple tasks are dealt with. 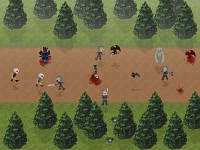 With a broad customisation, users can create weapons, both melee and ranged, that can be wielded by enemies within maps. With the inclusion of artificial intelligence and a clever path finding system, enemies will chase after members of opposing teams and attack until the member is dead or has escaped their field of vision. 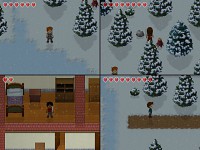 An inbuilt editor within the game maker which gives you the tools to create your own custom-made interfaces for your game, heads-up displays, loading screens and menus. This allows you to display items like selectable buttons, health bars, basic text and image objects, along with anything that you can think of.

Join a friendly community of people, who are willing to help with solutions you may require to scripting problems, play and give feedback on your games, and share ideas, resources, games and tutorials.

Stick around. 3D world-building and multiplayer support are just a few of many features to join the program as it develops and becomes bigger. Bugs and crashes are always taken care of based on reports made by users through the bug reporting system within the program.