After articles covering the development of th first two heroes of the game, it's time to present Lleana, the spunky and strong willed spacii sorceress.

Welcome to my series of features covering the heroes of Arelite Core. After a lengthy article about the hero of the game, along with one covering his engineer friend, it's onto the third character of the game, a female spacii named Lleana who covers some important mechanics in battle along with being fairly unique as an individual.

When I started work on Arelite Core, I knew that I wanted to have a very diverse cast, including when it came to character species. As the world would be developed, five species would emerge, with four of them having an attached playable character. The spacii started as an hommage to the traditional cat girls, but I wanted to move away from the typical stereotypes that trope brought.

Being the first spacii conceived visually, Lleana defined a lot of their traits. I wanted them to have bright, long flowing hair and light cat-like features, but also to avoid having a tail and outright cat ears. As such, they would resemble humans quite a bit, which plays into the game's lore, since unlike the other species, spaciis are accepted by humans and others alike. Furthermore, in designing Lleana herself, I wanted her to look nice, but to avoid the “sexy bimbo” look. In fact, early designs had larger breasts, and more revealing clothes which I felt wouldn't work as well for her as an adventurer. 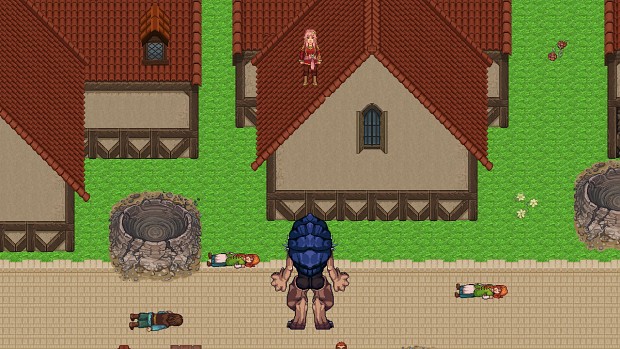 Lleana facing the fearsome Dalthor from the top of a roof

Another aspect of spaciis was their control of magic. Early designs had them all being tied to a magical orb, perhaps as a representation of their soul, but that design choice became difficult to manage for NPCs and was later dropped. Still, a floating orb remains Lleana's weapon of choice and I incorporated other innate magical abilities to them instead, such as their ability to teleport to a location within sight.

Culturally, spacii are scattered across the globe, being nomads by nature and also very independent. Whereas most other species had hometown where they were the majority, spaciis are spread out almost everywhere. As such, they became the first new type of character the player would encounter and remain omnipresent throughout the adventure. That definitely helped me add more diversity to the NPCs in the various villages.

Bringing it back specifically to Lleana, it was important for me to create a strong, independent and resourceful woman. I didn't want her to be turning to a male figure for guidance, and I didn't even want the tough exterior who breaks half way through the adventure to reveal how fragile she actually is. Lleana was to be the real thing, she doesn't need other people saving her and isn't an asset to a team because she brings “heart”.

In that regard, she became the perfect foil for Baeme, reacting with a lot of annoyance to his sarcastic approach. Because Karden and Baeme have such a history together, Karden wasn't as reactive to the engineer, making her a much better comedy partner. Needless to say, because Baeme is my favorite character, she ends up getting a good amount of screen time as well. 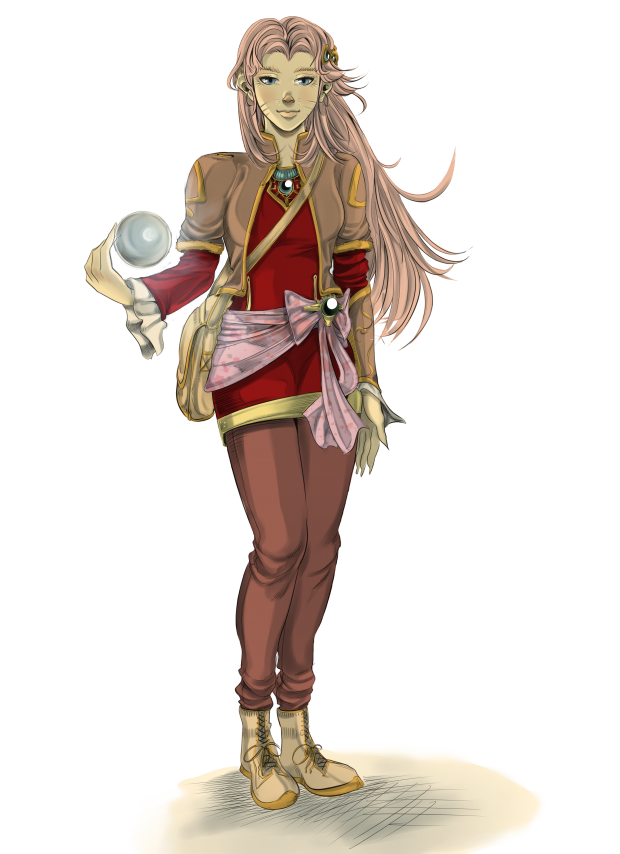 In battle, Lleana was designed to be the mage. I needed to have someone who could heal in the team, but I also didn't want her to only be a healer. The result was a classic battle mage, proficient in both attack and curative spells. She is also faster than most other characters and builds her blitz bar faster as well, which helped distinguish her further.

Although her blitz moves did change quite a bit during the development, their purpose always remained the same. An early lightning storm attack which is seen in the first trailer eventually evolved into a hail storm, partially because it looked cooler and also to match the types of enemies she would be encountering in the early portions of the game. Still, that attack was always meant to deal damage to all monsters, and as the combo system was implemented, it also doubled as a multi hit move. As such, Lleana's purpose in battle grew and it gave me more opportunities to make strong monsters, especially when it came to boss battles. 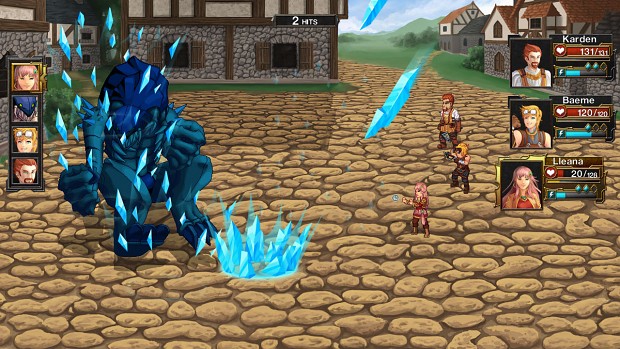 Fighting the Dalthor with a hail storm

Lleana was probably the easiest character for me to design. From her visual look, her purpose in the game, even her name which never changed from the onset, she's a character who never had to evolve much because I had a clear vision of what I wanted to do with her. Perhaps more importantly, I knew everything I wanted to avoid in all of the typical annoying and traditional JRPG female stereotypes. I like her very much because she's strong without feeling like I gave a man's personality to a female character.

Next week will come one of the most difficult characters to write for, the thalasai monk Ibram whom's story ark changed dramatically throughout the months and years. I won't be able to cover everything since it would spoil what's still there, but I think he'll be one of the most interesting party members to cover considering how much he's evolved.