Hey all! You may have seen our pre-alpha teaser video or some screenshots from Legends of the Brawl, but let's dig in and talk about the core of the game.

Legends of the Brawl is an over the top 4 player co-op mission based action adventure game.

It's all about big, exaggerated fun with that 90's platformer feel, brawling around with your friends, solving puzzles, completing mission objectives, and collecting all the loot you can.

Imagine the easy to pick up & play fun of Super Mario 3D World combined with the co-op gameplay in GTA V online jobs, taking place in a world somewhere between Abraham Lincoln: Vampire Hunter and Hellboy.

That's Legends of the Brawl! 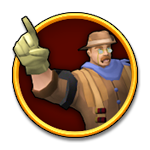 So what do you do?

Work with your friends to take out baddies, solve puzzles, collect artifacts, unlock new areas, and defeat powerful bosses, then claim the boss' power to use yourself. After the mission is complete, upgrade your character with new abilities and a custom powerup loadout, then take on more nightmares as you cleanse the world by defeating Rasputin's creations, and ultimately big boss Rasputin himself.

How can I play it?

Initial release is planned for Steam, then on to Xbox One and PS4.

We are currently working towards finishing up a "vertical slice" which is a focused, completed bit of the game, like a demo. Once that's done, we'll be taking it to Kickstarter to make sure the game has plenty of appeal, and to help fund the Steam version of the core of the game. After the Kickstarter is complete, we'll be pushing to complete an early access version of the game so the community can help shape the final product.

There sure seems to be a lot of games about legends...

There are, but these are true legends. We're talking historical badasses of the early 20th century including Teddy Roosevelt, Nikola Tesla, Amelia Earhart & more, and anti-heroes including Lizzie Borden, Aleister Crowley, Grigori Rasputin and more to be announced.

We'll be releasing a lot more info as we go along and will be posting up some dev blogs documenting our trials, tribulations, and breakthroughs. Why not let us know the kind of stuff you'd like us to cover in our devlogs?