Post feature RSS A captain split between duty and necessity

Welcome to the final article in my series of features covering the heroes on Arelite Core. Today I will cover the final party member of the game, Pharj, the Holarii captain.

Posted by dragonslumber on Sep 1st, 2015

Welcome to the final article in my series of features covering the heroes on Arelite Core. For the past few weeks, I have presented the development process and in-game roles of Karden, Baeme, Lleana, Ibram and Aurek. They each serve a specific purpose in the game. At times they exist to push the story along, and at other times to balance out combat, and I feel each are interesting and deep in their own way. Today I will cover the final party member of the game, Pharj, the Holarii captain.

When I started designing the world of Arelite Core, I spent a lot of time looking at other media to determine what the inhabiting species would be. I ended up with 5 different species, including the humans. Each were chosen either as a variation on a trope or because I felt there wasn't much resembling them in most modern culture. The bird like Holarii were born as a mix of the two, because I wanted winged people, but actual bird people have been fairly rare in fantasy media. 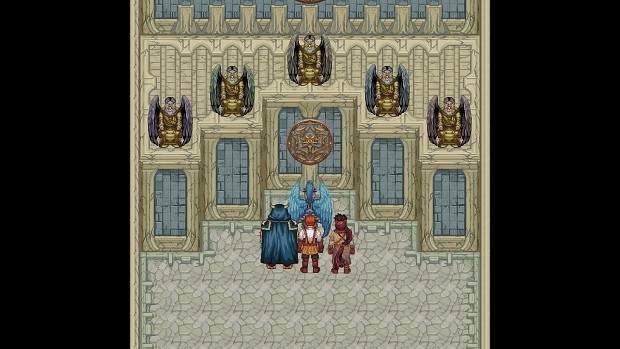 Pharj, pleading for her friends in front of the holarii council

As the dynamics of Arelite Core emerged, the Holarii took a more important role in the world as the leaders of the southern continent. Being winged creatures, I felt they would have more freedom, and thus opportunities which would in turn make it reasonable that they would rule over the land. Because they were so important, I designed some distinct houses for them, inspired by bird houses. As one would expect from flying characters, the Holarii architecture became all about height and inaccessibility for the “walkers”.

The Holarii are probably the culture I find the most interesting in the game, because although the humans and the Khane have their own unique ways, a lot of it felt traditional. The humans rule the north from a castle, set at the edge of the victorian era inspired city of Boreale. It's interesting, but it didn't actually feel unique. The Holarii feel unique, their culture, their interactions with the other species under their dominion, the architecture, I feel like everything about the Holarii raises the bar in Arelite Core's story-telling. 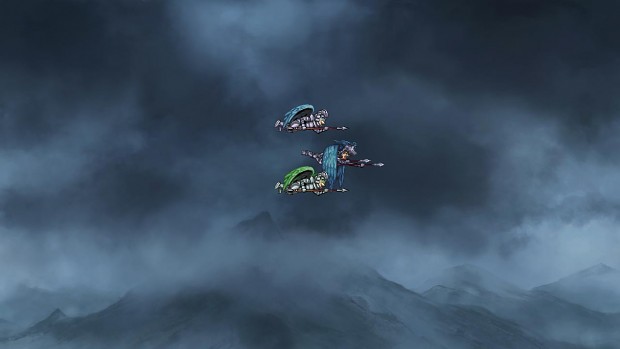 Pharj and her troops flying over a stormy mountain range

With so much richness in the Holarii culture, it was immediately clear that I would need a representative of their culture to join the party and interact with the other heroes. I had thus far avoided any military as party members because it was such an established trope in JRPGs, but considering how the Holarii had evolved, it made sense to make Pharj a captain. It gave the player an in with the rulers of the land, the council of Lahriah, and also provided a different perspective on the conflict since she had been facing it for some time already.

In a way, Pharj was designed to be the most “real” character of all of the protagonists. Where Ibram turned into a one note angry character, Pharj has levels of nuance made possible thanks to her diversity of character. She's a soldier, a woman, a wife, a mother, and all of those traits make for a more complex character. As a Holarii military captain, she is well aware of the need for sacrifices and she is willing to make those difficult decisions for the greater good. As a wife and mother, she presented an an excellent opportunity to offer a different dynamic since none of the other characters go into their family lives. At the same time, she was raised in a culture of disdain for “walkers”, yet she must ally with Karden and his friends to stop Talameq's threat, which is another source of inner conflict. 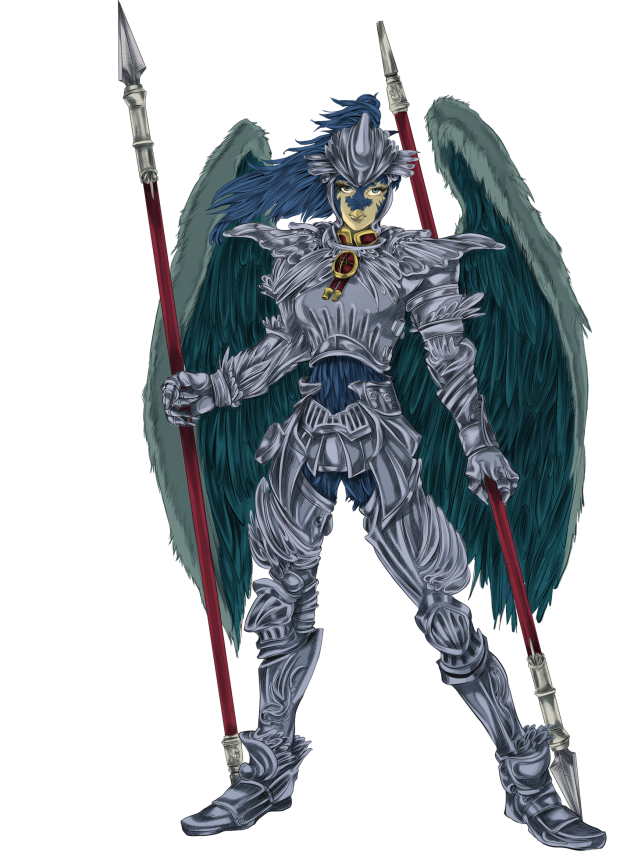 As a captain should be, Pharj is a character who is very competent and versatile on the battlefield. She mixes a lot of traits from the other characters, with a good amount of strength and speed, the ability to use combos and heal, and inflict some status effects. She also has access to some lightning and holy attacks during the later levels. Rather than bring an entirely different fighting method, Pharj is there to pick up the slack from the other characters. She's not as good in any of the fields, can't heal as well as Lleana, isn't as fast as Baeme, but she's a boon to any team composition thanks to her wide array of skills.

When I started designing Pharj, I knew that I wanted her to fight using two spears. At the time, I didn't know exactly how she would use them, I just had this vision of wielding those two weapons. Over the course of well over a year, I looked at various martial arts images and videos, both real and fictional, and ended up with a style where she keeps the spear locked under arm when striking. Having spears also worked well as a catalyst for lightning as well as striking while flying through the air. 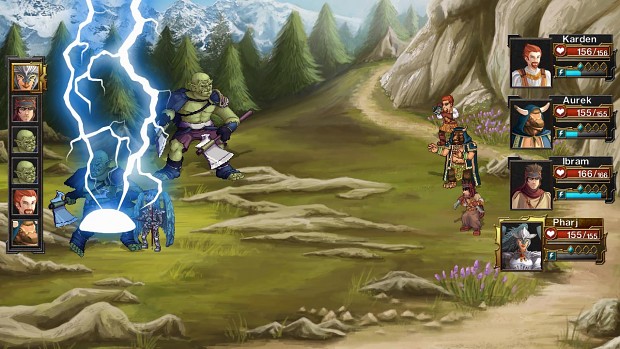 Lightning strike against an Ork

Though I wouldn't say Pharj is my favorite party member, she probably is the most important character in terms of world design. Through various circumstances, she finds herself in conflict with the world around her, often due to her culture. She grows to respect Karden, a “walker”, despite Holarii traditions saying otherwise. Likewise, she doesn't always agree with the Holarii council and must fight that battle as well. Yet she faces those challenges with her head held high and a very collected mind, which sets her apart from the more angry Ibram.

This concludes my series of articles on the 6 heroes of Arelite Core. I've tried to keep information as broad as I could, and in fact there is a lot which is left to be discovered about each of them. It was important to me to not only craft a strong, believable and diverse cast, but also have them change drastically throughout the story. As a game, Arelite Core is as much about the world and its inhabitants as it is the events which unfold. I hope you will be inspired to discover what I have in store for each of these heroes.