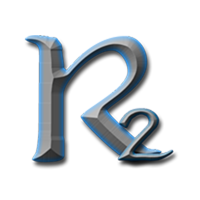 Realm Crafter Community Edition is an all-in-one out of the box MMO game engine. It requires no programming and is directed toward independent game developers. The Engine comes with a Grand Unified Editor (GUE), one application to build your entire game and with various other programs such as, Terrain Editor, Font Generator, Gubbins Tool, Scripts Editor and many more. The license includes access to the source code and the chance to help with the future development of RCCE.

SolStar abandoned Realm Crafter in early 2012, and the community started to disband and move on. After a year of no news the remaining members of the community came together and rebuilt the engine, RCCE was born.

RCCE was released in early 2014 developed by Ryde Software. It was made purely for the benefit remaining community members so that they had an engine that wasn't filled with bugs. In late 2014 Ryde Software and Gajatix Software teamed up along with some community members to rebuild the engine and push it to it's limits. On April 2nd 2015 RCCE2 was released. RCCE2 was the next step for the community engine, with a new code structure and superior graphics to all previous versions. It is Faster, More Powerful, Easier to Use, More Customisable and More Professional.

How to get a license

To purchase a license for RCCE simply follow the link below to our store page.
Customer.rydesoftware.com

If you have purchased a license for Realm Crafter in the past, you are entitled to a free RCCE license, follow the link below for more information.
Realmcrafterce.com

A license for RCCE entitles you to the following:

RCCE was the first version of the Community Engine developed by Ryde Software. It's primarypurpose was to give what remained of the Realm Crafter community an engine that wasn't filled with bugs. Other than a few new features and several bug fixes, not much difference between RCCE and RCS can be found. This version was the starting point for the entire RCCE project. RCCE was eventually discontinued and replaced by the RCCE_FE project.

After the release of RCCE some of the community members came together and wanted to push theengine a little further. RCCE_FE was built as a visual upgrade to RCCE, introducing new post processing effects to create beautiful and far more superior graphics while fixing some further bugs in the engine. After several updates to this platform, although the graphical capabilities were much improved the engine was becoming a lot more unstable and was eventually discontinued.

It was decided that the only way to create the engine that everyone wanted was to start again. Development for RCCE2 was handed to Gajatix Software, which rebuilt the RCCE engine on their OverSeer Platform. In doing so, the engine was able to render to a quality even better than RCCE_FE and have hardly any of the bugs or issues that previous versions had. RCCE2 is the latest version of the Community Engine and is still being developed by Gajatix Software.

Zone Editor
Watch a time lapse: Youtube.com
The zones editor is similar to that of a WYSIWYG system without all the post-processing effects. It requires no programming to use as you simply drag and drop your models in the scene. When working on your MMO this is where you will be spending most of your time, designing environments, adjusting weather controls, setting up lighting, collisions fields etc. The only limit is your imagination. 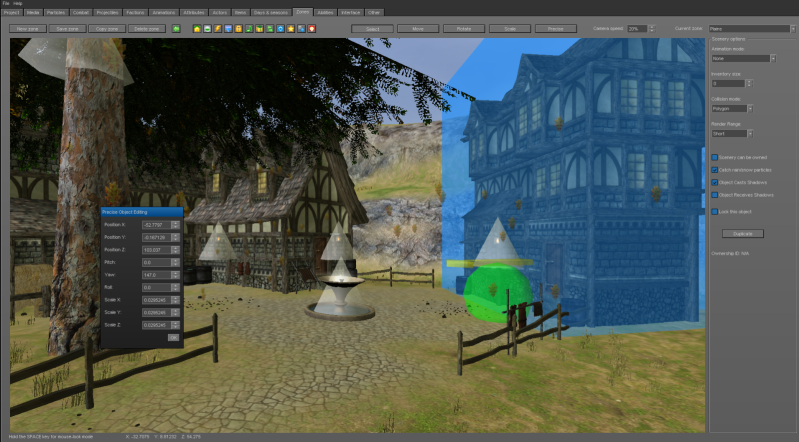 Particle Editor
The particle editors will allow you to create all the special effects for your game, for example, fire. These can then be added into your game world directly from the zones editor or can be run via script to be used when casting a spell for instance. Using lots of different behavioural settings and force settings there is no limit to what effects can be created in this editor. 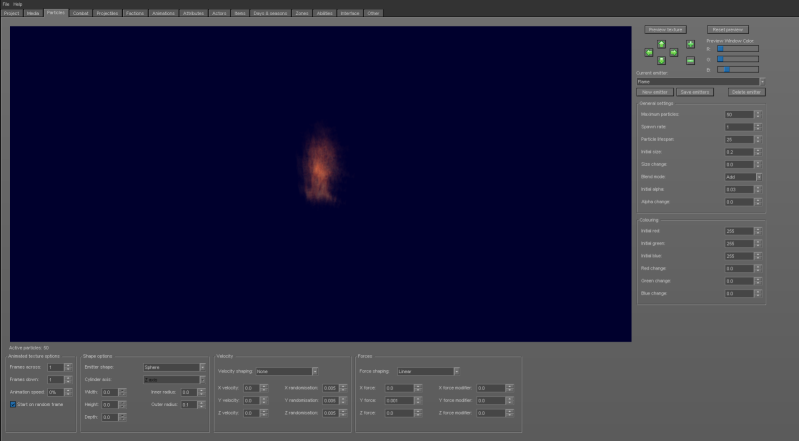 Interface Editor
You can select different parts of the interface and change their location and scale on the screen in game without the need of any programming, saving lots of time. There are also additional settings which allow you to adjust the colour and transparency of each module for even more control. 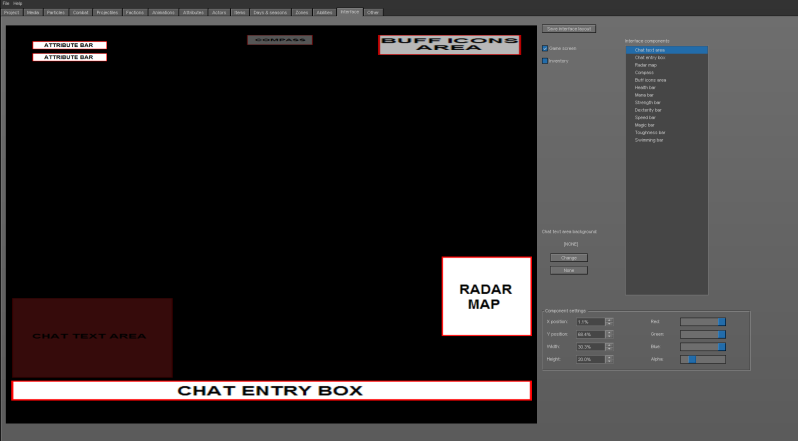 Sound Engine
The sound engine in RCCE2 is still early in it's development stages but works efficiently and to a good standard. Apart from music played in the client, RCCE2 also has a 3D sound engine, meaning the volume and panning of a sound played in game gets adjusted depending on the players location to the source if the developer specifies it to behave like that.

New Features
- New GUE Splash Art
- New Scenery options to allow you to decide whether a model casts shadows, receive shadows, and set the range at which the model stops being rendered (LOD)
- Water now refracts light creating beautiful results.
- The Project manager is now included as part of the engine and has also been updated with new tools and a new design.
- The Graphics options menu in the client is going to give the player a lot more control with new options.
- New GUE design, complete revamp from RCS design. Now looks a lot more professional.
- New Tooltips throughout the GUE to increase user friendliness
- You can now place dynamic lights in your zone in the GUE
- You can now adjust the colour of the preview background in the particles tab.
- New Shortcut Keys in the GUE to make it easier to use and speed up development for users.
- Extremely quick loading screens.
- Refined Post-Processing system, Advanced Bloom, Depth of Field, Volumetric Light, Shadows etc.

Changes
- Waypoints no longer spawn so high on the Y axis. This has been turned down slightly since flying waypoints were getting irritating.
- Loading screen Image stretches across entire screen when using Widescreen Resolutions.
- Rebuilt Widescreen System. Much more optimised.
- Action bar Texture now stretches across entire screen when using a widescreen resolution.
- Action Bar buttons now adjust their location depending on whether you are using a Standard or Widescreen Resolution
- Optimised Action Bar Buttons
- Got rid of the grey thing on the main menu, now uses the LoginSet.b3d model throughout the main menu.
- Removed the progress bar to quit the game when key Esc is hit. Now opens up a menu with several options, including keybindings, help, log out and quit.
- Remove the double click to attack actors. This is causing issues when interacting with NPC's which you don't want the player to be able to kill.
- Rebuilt Media Tab, you can now manual change the angle of the model in the preview using the mouse.
- Added ToolTips to help with the new script system in the GUE.
- Rebind the action bar buttons to 1 to = keys rather than F1 to F12
- Character Interaction Window now closes if you move a long distance away from the selected target.
- GUE loads up much faster than before.
- The GUE interface has had a bit of a clean up, merging sub-tabs and making it a lot more user friendly while reducing time to set up certain entities, such as actors for your game.
- The Main Menu in the client is now much more responsive and doesn't freeze up when you press a button.
- NPC's now rotate to face the player when a dialog is started.
- Sun's no longer render if the zone isn't marked as outdoors.
- Main Menu logo uses a Mask filter instead of Alpha to stop it becoming transparent.

Dragon Gate is based in the world of Corderia. In an ideal world Dragon Gate is aimed to be a successful MMORPG with a large player base, fun game-play...

This project has unfortunately been abandoned however there is a new realmcrafter community website; realmcrafter.co.uk

Why does it say open source on your website and when you click the link its a pay to use product? That's false advertising!

Not at all. Source Code is available for all versions of the engine to anyone who has purchased a license.

"Our software is made as open source as we can get it, once purchased you are given all the source we have made available with your download. If our engine is too limiting for your needs you can fire up the source and customize it to your hearts desire."

Mod SDK & Community
Built a game for RCCE2 and want to support mods? Try mod.io, a cross-platform mod SDK created by Indie DB which makes it easy to get a mod community up and running in-game. Currently seeking games to integrate and promote