Cyber Kings - Western Pacific can currently only be used with the Random World setting which requires the Holy Fury DLC, or with the provided save file. Trying to launch the mod without using the Random World setting or the provided save file will crash the game. Setting: Long ago, Earth went dark on the same day all existing electronics in the solar system stopped working. All ships not in orbit fell from the sky. Humanity quickly descended into chaos as society collapsed, bringing on a new Dark Age. Most of the population succumbed to famine as governments broke down and nations fractured. Around 1000 years later the Western Pacific is recovering and has entered a new Medieval Era, largely forgetting the accurate history of humanity and the disaster. Knowledge of the off-world colonies has faded into myths and legends, until one day a derelict ship, carrying a strange elongated race that cannot survive in the gravity well of Earth, arrived in orbit. 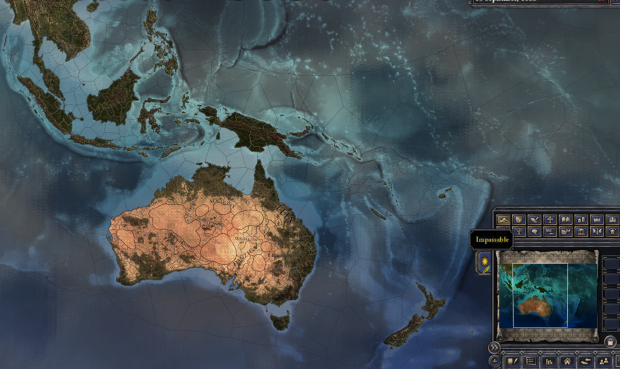 why this mod isn't in the workshop?

Strait crossing need to be fixed:
between Java and Sumatra
between Papua and Australia

It’s fixed on the GitHub version. I tried to upload it to Steam workshop but it kept failing for a whole hour… I will try again once I have the religion and culture borders ready. Almost there