Checksum QODX after 2nd startup. The Pax Britannica modifier was renamed Hegemon. Any Hegemon that loses 1st place for 2 years will lose the Hegemon modifier and the new #1 ranked GP will receive the Hegemon modifier. Added acquire core state for puppet cb that allows players to take states on behalf of their puppets for 5 infamy. Added Congo Conference decision for secondary powers that lets each GP vote yes or no, if 5 of them vote yes then the Congo Free State is created and made a puppet of the nation that fired the decision with additional events/decisions that lets them annex the Free State later. South Asian muslim countries can form Pakistan by decision, however this prevents them from forming India later on. Buffed Expansion idea to -0.03 infamy decay.

# Version 0.53 - 4/9/2021
## Bug Fixes:
* Fixed a bug that allowed clergymen in AI nations to go over 4%.
* Fixed the event that is supposed to release all vassals from the Raj when the End of British India happens.
* Removed missing -0.01 infamy decay modifier from manifest destiny due to infamy decay not working with inventions.
* Removed port requirement for unciv naval reforms due to AI landlocked nations getting stuck on naval reforms because they are hardcoded to not switch to a different category of reforms until the current one is finished.
* Carlist Victory decision moves capital of Carlist Spain to Madrid.

## General gameplay changes:
* Changed the name of Pax Britannica country modifier to Hegemon and added +20% leadership on top of the other bonuses. Any Hegemon can lose hegemony by dropping out of #1 rank for 2 years and any country can become the Hegemon by being rank #1 while no other country holds the Hegemon modifier.
* Added Congo Conference decision for secondary powers which allows all GPs to vote yes or no for the creation of the Congo Free State. If yes gets 5 or more votes, the Congo Free State will inherit all of the Congo and become a puppet of the country that fired the decision. Every province in the new Congo Free State will receive the Force Publique modifier which lowers pop growth rate until either the Heart of Darkness event fires in the Free State's overlord or the Free state gains independence.
* Reworked the Heart of Darkness event to only trigger for the overlord of Congo Free State and give the option of either +6 infamy or -20% prestige.
* Added decision for the overlord of the Congo Free State to annex it if the overlord has triggered the Heart of Darkness event and researched government interventionism.
* Added -0.05 Min. liferating colonization modifier to Prophylaxis against Malaria invention and moved +0.01 pop growth from Prophylaxis against Malaria to Aerial Bacteria and Antiseptic Principle.
* Lowered starting liferating of the Congo basin to 10.
* Lowered all positive discovery chance modifiers in Colonial Negotiations invention to 5 and added more potential bonuses.
* Buffed infamy decay from expansion national idea from -0.02 to -0.03 per month.
* The coring province event now requires nationalism and imperialism as a prerequisite and that a province is either coastal or adjacent to a cored province.
* Added Acquire core state for puppet cb that allows a nation to transfer a core state from the target nation to a puppet of the attacking nation. This cb costs 5 infamy compared to the 10 infamy of regular Demand for ally cb.
* Reverted Pan Nationalist rebels to vanilla properties and effects. The Crown from the Gutter event no longer triggers in the country that gets broken by pan nationalist rebels and only triggers for a great power of the same cultural union.
* Removed province specific New World Farm modifier that gave new world provinces +200% farm size and re-added the 10x farm size modifier to all new world provinces from the base game.

###### Portugal:
* Changed the Restore Order in Brazil decision to be able to be enacted once for each country that has Brazilian as a primary culture. The effects on each country remains the same, they will become an autonomous dependency of Portugal and their POPs will migrate to Portugal and vice versa.
* Changed prerequisites for Reform Portugal-Brazil decision.
* Removed free Restore Order in Brazil cb.
* Added a decision to retake Mbanza.
* Lost Mocamedes province in 1836 start.
* Added a decision to colonize Mocamedes.

###### Egypt:
* Mahdist revolt no longer triggers if slavery is outlawed and citizens rights is not primary culture only

###### Balkans:
* Added an event that triggers in 1880 that lowers liferating of all Balkan provinces down to 35 except for the provinces of Sarajevo, Belgrade, Athens, Bucharest, and Istanbul. 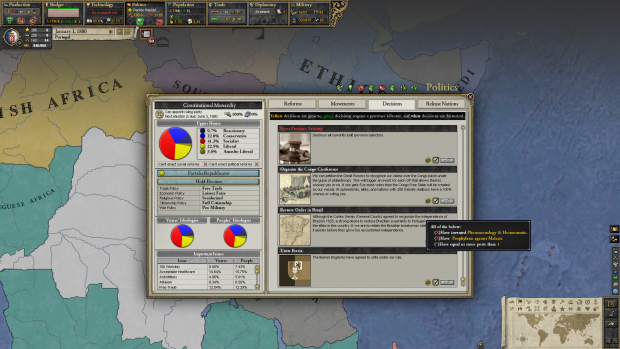 I just almost finish a Brazil run, and i don't have too much of a problem.

However, something happen in this run that i don't think happen before. Ghostland constantly gives me a message to be friends, which breaks the game because of the giant troops they can afford lol, but... just that.

Are you saying ghostland has an army in your game? If yes, can you send a screenshot or save? I've never seen ghostland or world bank field an army before.

Nah, i was just joking that literally is a ghost country that gives me messages to an alliance XD

A weird issue I've had with a Japan run: in 1879 China instantly flips from 35% westernized to 100% (literally overnight.) Is this intended behavior? I played for a few more years and the warlord era fired in 1882ish. I can provide a save if need be.

Was there any Chinese substate that was close to civilizing when this occurred? When a Chinese substate civilizes, an event triggers that makes the rest of China instantly civilize. This event exists in vanilla and HPM too.

Ah, I'd actually never seen that happen - and yes it was Mongolia.

I'd like to add as well that the AI seems wayyy too happy to annex random non-core states such that Europe remains constantly at war over Germany annexing the Ardennes or the French eating all of Northern Italy after the fifth failed Italian liberation of Venice.

i was playing as Russia and my people didn't get promoted to workers at all except when i used focus.

Chance to promote to craftsmen when not using NF is very small for low literacy POPs. Russia won't get much craftsmen outside of the states that have craftsmen NF until their literacy goes up.