Checksum ZUVQ after 2nd startup. Tons of bug fixes and general gameplay balances. Biggest change is the removal of admin points. Province selector decisions now have alternate costs and/or cooldowns instead of admin points. ********** NEW WORLD WAR I SCENARIO ********** Added a January 1914 sandbox scenario and a July 1914 WW1 scenario. Due to the inability to merge wars or make the AI join ongoing wars, the WW1 scenario starts with all European participants already at war. When all countries are played by the AI, there is about a 50/50 chance of either side winning. There are several scripted peace events that trigger when a country peaces out of the ongoing great war. The final map of Europe will look different depending not only on which side wins the war, but also whether or not individual members sued for peace before the final victory. 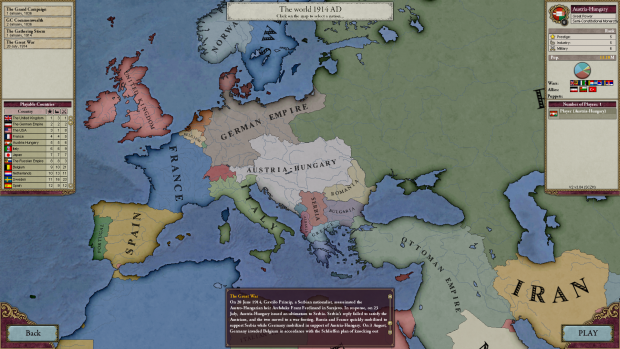 Great mod. It would be nice if you translate it into Spanish