Includes an in-game Troop Tree Viewer and some bug fixes. Install AFTER patch 1.1.

To install merge the contents of the RisingSunPatch1.2 folder with your Rising Sun mod folder. Do this AFTER installing patch 1.1. Starting a new save is highly recommended.

- Added an in-game troop tree viewer (rubik's OSP) that can be accessed through Reports > View troop trees
- Certain units should no longer spawn with bows/quivers incorrectly
- Pistols are now available for sale in markets
- Added Next/Prev buttons to faction relations report so all relations can be viewed
- Changed faction names on the lord relations and faction relations reports to their appropriate Rising Sun names
- Remodelled the horses to their Gekokujo 3.1b appearances (they look more Japanese-y now)
- The map camera can now view the entire Korean peninsula properly
- Removed reference to a missing USA_Infantry texture file in a brf that was causing errors
- Added a new brf containing a kepi mesh that was referenced but didn't exist causing errors
- Changes the in-game year from 1568 to 1867

Please report any bugs you find. 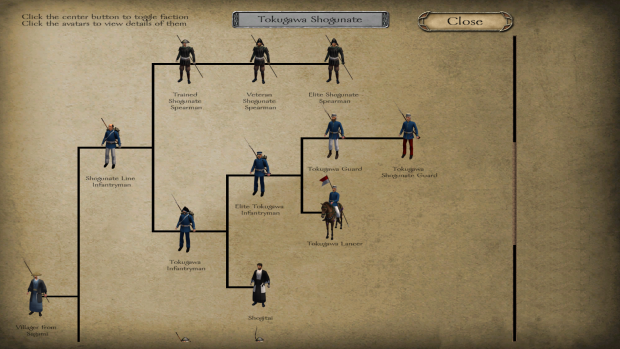 My game's broken now, it tries to open to native instead of rising sun and crashes.

learn how to play mods then dont spam here

How's it spam? I posted it hoping someone could give me a hand, there's no need for you to be a ****.

try to re-install and/or delete any files that is needed or check the flooder that the Crash is giving you (like C:/Program Filesx86/Games/Mount&Blade:Warband/Rising Sun/...) and try to delete any file that is showing up to you

Nice, appreciate the update, thanks mane!

did you fixed Kofu infantrymen ? They dont use ANY weapon very often , completely useless with fist fighting . I mention that before...

ah i see the problem, that unit is not guaranteed a ranged weapon when it should be. if i put out another patch it will include a fix, but in the meantime to fix this do the following:
1. open the troops.txt file in the rising sun folder
2. ctrl+f for "trp_gekokujo_takeda_trained_spearman"
3. find the numbers "15728640" on this line then highlight and replace them with "82837504"
this should fix it but it may require a new save to take effect, i'm not entirely sure.

TOSA
Tosa hatamoto Gunner is in wrong tier (should be in samurai shooters), and wear old armor , so at the end playing modern troops we gonna have samurai army

TOKUGAWA SHOGUNATE
shogunate guard should be samurai , but veteran shogunate skirmisher must be modern troop

SATSUMA
naginata kachi and matchlock kachi..even they dont know what they do in that troop tree :P

imperial infantry (satsuma ) HAS NO TROUSERS !

What is doing Tosa rifleman in satsuma domain troop tree ?

jozai retainer must be samurai but jozai spearman and skirmishers should be modern , will be much easier ...

whats the point imlplement koreans wearing japanese armors. They need something new in te future , if not exactly new , maybe armor colours , yellow or something like that

TAKADA TROUSERS
they look nice , but no one use them at all , could be nice put them into mercenary or bandit tree , i really like these pyjama strips

Tokugawa Frock coat (long imperial) been removed , they were beautiful , i mean these looking like satsuma frock coat but light blue colour (

very popular , specially among lancers is very shiny , looks like from mods from 2008 year :), i mean it has horrible ugly texture .

Installed the mod into my Rising Sun folder and nothing has changed. The description is too vague to be helpful- I figured you install it in the same way you install the 1.1 patch. What do I do to fix it?

I installed this and took a look at reports and did not see "view troop trees." Maybe I did something wrong?

Fix the shoulderpads please. They were fixed in 3.1

The Samurai look so much more lightly armored than they actually were because of it.

Do I install to my data folder?
Cause its not showing up in game.