The newest Beta version of Mushroom Kingdom Fusion, v0.4, has finally been released. This newest version contains a much more streamlined version of the game, with faster load times, smoother gameplay, and less lag altogether. It also has other features, such as improved flight mechanics, new powerups, and red coins you can collect for bonus prizes. And of course, new levels; 35 in total. 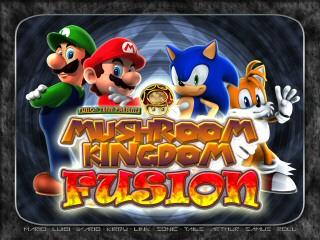 Sorry, now I find them =D

Good, I see you took my first suggestion into account.

Now try Re-Re-Releasing it after you've made the music volume not blow my brains out whenever I start the game.

1 - mario is friction in the air.
2 - hit a monster holding 'jump' cause a rise unbelievable.
3 - out of a mobile platform in the opposite direction it gives you speed.
4 break a block does not push the Mario down, causing chain reaction
5 - mario jumps with low gravity.
6 - Why the hell monsters collide?
7 - because shift and control and not letters.
8 - When you hit the corner of a platform you should climb it, do not pinch (yes, I said stuck)
9 - When Mario is running, he can not jump higher, but should.
10 - The red flowers cast fireballs in four directions fixed, not in the direction of Mario.
11 - When picking up the remains of the "Mario World", the mario is great. That did not happen
12 - When picking up star, Mario starts to change the palette, all that happened was it flashing on dark colors.
12 - I fell on the floor and stuck down a pixel level.
13 - Counting the score takes place from 10 to 10 points after a 1, here comes a 5 by 5 by FCAR negative.
14 - mario instantly becomes small: when Mario grows, it should blink in stagnation, not once
15 - When Mario is running the animation it should be faster.
16 - The flower fire mario world: they all drop fire in synchrony, they are releasing as they appear on screen.
17 - mario is prone to fly after only 5 sqm racing against 15 of mario3.
18 - when you get a map, Mario is flying by the engine's inability to deal with the character gets on the floor.
19 - when Mario jumps with a propensity to fly, he keeps flying even when the sprite is climbing. not this happens.
20 - when you jump down from a platform near the edges, mario should be pushed to the nearest edge.
21 - mario is standing on much outside of the platforms. The maximum acceptable is 3 pixels, compared with 6 of the game.
22 - The mask of a side impact mario is so large that it collides with a monster caught the upper deck. (...)

(...)23 - Mask collision flower fire mario world pxels is 16, not 48.
24 - mario in the friction of the ground is far below the norm
25 - When you're going to one side, and tightens to the other, the friction is increased 3x mario
26 - I hit a wall, instead of scraping the ground until it pings me back
27 - to climb into a box score, one must press 'jump' just in time for colsão, hold to no avail.
28 - The box score go down when Mario steps.
29 - The animation of the monsters are out of sync.
30 - I ran into a turtle that was a box. away.
31 - Animation of the piranha flower is offset by one pixel
32 - Mario continues with a raised hand while going down in the air. this does not happen
33 - on the opening screen of the game, there's a goomba with the animation stopped.
34 - various game sound samples are contaminated
with background music / other effects / silence at the beginning
35 - the game does not protect his memory, allowing me to put 99 lives with CE 5.6
36 - YOU CAN CROSS THE STAGE ON THE MAP DETAIL: IT'S NOT HAPPEN IN ANY GAME EVER MADE IN THE UNIVERSE
37 - green hulls remain active when they leave the screen.
38 - the tails do not get momentum, and at low speeds, no way.
39 - the acceleration of tails in the air is 4x smaller than normal
40 - you can step on monsters mario 2. This does not happen often
41 - The tails do not fly with its tail.
42 - catch monsters when they are partially off the screen.
43 - why the hell you can step into a bob-omb?
44 - does not hide the fadeout water.
45 - Monster orbiting platform is moved vertically.
46 - when you get a text box, the game should stop. This is not happening.
47 - has a phase map that did not enter.
48 - the fireball has a linear motion. Should simulate gravity.
49 - When you're carrying a gun halo, and turns, it takes 2 frames to update, so flashing the wrong
50 - when you're with lightning protection, you can not jump when it is falling. This is wrong. (...)

51 - is terribly slow on a big stage.
52 - used sprites metroid fusion on a map supposedly Halo. this is unacceptable.
53 - random bixos pressed through walls.
54 - I used a pipe and fell off the map, so I can not continue.
55 - esc closes without asking

Of these, 10 make the game impossible
10 and 10 are annoying are graphically gruesome.

I loved the concept of the game, please fix these bugs and get it for the next version.

Any idea when there may be a new update? IT's been over a year...the project isn't dead, is it?