This is more of a patch for the current version, but it's packed full of stuff - including new borders in the Meuse, reshaped provinces in Anatolia and Uruguay and a few reworks on American decisions (and a new one). There were several problems with the old version, and one of the biggest ones was the NNM-HPM mixed dismantlement that didn't work as well as I wanted. Now it's closer to what I envisioned for the dismantlement rework - and should be fairer. I will later write a piece about how it works, the biggest changes in this version and I will try and answer as many questions and messages as I can. Until then, have fun! Checksum should be ZRTH. 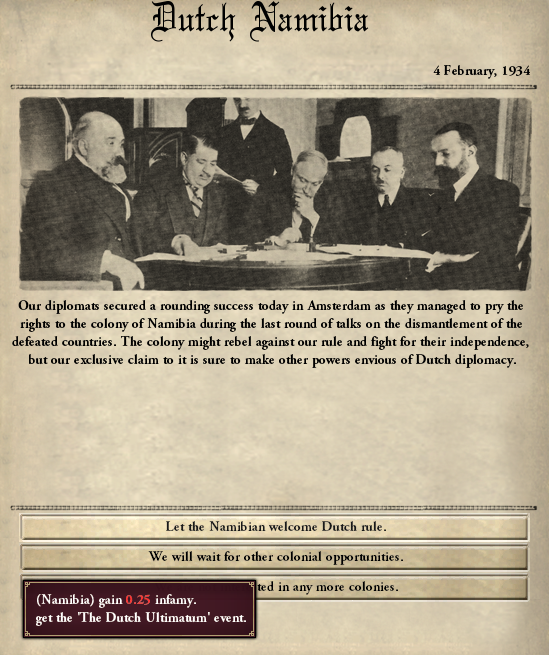 Thank you so much for all these efforts! Can't wait to play the new version.
Edit: Did you change it so that the only way to remove isolationism now is through westernizing? Wow that actually completely kills my former playstyle.

So, I downloaded this with 7zip, but it says that there is a 'unsupported compression method' for the files and it doesn't work properly.

Moving Darmstadt into the Palatinate region makes the French natural borders pretty ugly when achieved since it now crosses the river. Also was the issue of France having their rhine states removed from them when dismantling Germany fixed with the new dismantle script changes?

Can we get a Bohemian independence decision for Germany that removes Czech cores on Sudetes, removes German cores on the rest of Bohemia, and releases all of it except the Sudetes? Or for this to be one of the response options to the Czech independence event. It'd be nice for aesthetic borders.

I noticed an error in the name of the province 2159, Mexico. Is it or did I messed up with some files?

Texas was annexed by Mexico in my first couple games with the update (which is a welcome change considering the capture of Santa Anna was about the only AI outcome before), but the Mexican-American war still occurred - which makes sense still - but the US did not enforce their wargoal and take cores from Mexico. They just offered a white peace despite obliterating Mexico. Is this intentional? If so then there is no issue.

The mod doesn't show up on the launcher, any ideas why?

Same thing here. All I've done is copy and pasted the file into the mods file. Was I meant to do anything else?

hey good work keep up. You should fix the decision "native protection act". When I played as Mexico I couldn't enforce it. I meet all requirements except "unclaimed cores" . Which is odd because I own all my cores up to California so thats not the issue. Appearently the game wants me to complete my ""uncompleted states""?? I figured this meant getting the remainder of Colorado, Kansas, Wyoming from the United States. But I doubt the other half of wyoming is worth taking

I keep getting hit with the "worker's revolution" event when i'm communist, even though i've already had it the first time and removed the capitalists

The fact that you are still making updates to this mod after all these years is incredible. Especially since you totally don't have to. I think I can speak for everyone when I say "you're awesome and we appreciate all your hard work".

My checksum is SYFE and not ZRTH. I use the steamversion (no beta) and this download. I tried with the beta 3.04 and it stays SYFE...

Good Work! But I think dismantling is kinda werid... For example I dismantle Russia as the Ottoman and Denmark get everything(they are not even in the war) While i get nothing. or I randomly get Netherland Colony in Africa as Japan for no reason and Norway get Indonesia.(they are not even a great power)